He lifted his head and gasped, unable to look away. The man’s warm brown eyes studied him. Jessie licked his dry lips. Suddenly his pants became tighter. He recognized this man from his dreams. He swallowed, staring at the facial hair, remembering the feel of it against his skin. Somehow he knew the man was real, but meeting him still sucked the air from his lungs. He turned his head. His dream lover never appeared alone. He hoped the stranger sitting next to him was only a stranger. No such luck. He couldn’t forget the dark, wild hair and the dangerous smirk. Jessie backed up. He should’ve known. His dreams were never dreams. They always came true. He looked all around. Someday soon, he’d be in bed with these two men.

No, his mind screamed. He didn’t sleep with men. Hell, he’d never slept with a man. There’s no way he’d hop into bed with two. While his mind objected, his body responded.

“I’m sorry. Just very nervous today.” And getting worse by the minute, his mind taunted.

“Are you all right?” A large hand that could snap him in half caressed his wrist in a loving gesture that didn’t help his other problem. He shifted uncomfortably.

“You shouldn’t do that.” Finally, he found his voice as warm brown eyes bore into his soul with an intensity that forced him to look away. He turned toward the other man. An image of Jessie lying naked on blue silk sheets invaded his thoughts. The dark-haired stranger undressed him with sexy ice-blue eyes, slowly peeling off one layer of clothes at a time.

“Do you want to do something later? We can meet up and talk,” the other man said.

Jessie froze at the invitation. The moment he was alone with the two men, he’d end up flat on his back, naked with legs spread apart.

“Don’t mind him.” A silky voice said. Jessie quivered at the sound.

“What’s your name?” The man with brown, wavy hair asked. His warm, chocolate eyes tried to comfort him, but he felt like the ball in a racquetball game, bouncing between two powerful players.

“Jessie.” His eyes widened. The name slipped out before he could stop it, or at least that’s what he told himself. He stared at the godly strangers, unable to pull his gaze away, images of the three of them naked in bed kept flashing into his mind. Feather touches moved across his skin. A fire burned inside. He tried to step back, but he couldn’t move.

“That’s a nice name,” the wavy-haired man said in a seductive tone that left his knees weak.

Jessie looked at Damon. The commanding presence almost had Jessie begging for him to take charge of his body.

“And this is Michael,” Damon added.

Jessie nodded. He nibbled on his lip and looked at Michael.

“Can I get you something?” Jessie stuttered. “I won’t charge for the coffee.”

“The coffee’s perfect. Make sure to put it on our bill,” Michael purred with a voice that should’ve been illegal.

“But you didn’t order it,” he countered, unable to just stand there and fall under their spell.

“Get us two of your favorite dishes,” Michael added.

Michael nodded. “We want to eat the food you like.”

His eyes opened in horror. He leaned closer. “I wouldn’t eat here,” he whispered. He looked over his shoulder in case his boss snuck up behind him. If he was overheard, that meant instant firing, but he couldn’t let these men get sick. The health inspection sticker on the wall was a forgery, roaches lived in the cabinets, and the food was moldy.

Damon leaned closer. “Then the coffee will be it. No need risking food poisoning.”

Michael glared at his companion. Jessie felt a pang of hurt that these two men shared things that didn’t include him. He forced a smile and nodded. When he turned, the group in the corner continued to stare at him. He froze at their menacing gaze.

A warm comforting hand landed on his hand. He looked into Damon’s eyes.

Jessie forced the oxygen in and out of his lungs. Damon was talking to him, but he was focused on the evil in the corner and couldn’t hear the words.

“I have to get back to work.” They looked at him with concern, so he forced a smile before hurrying away.

Sarah placed a hand on his shoulder. “Is everything okay?” she asked. Her tone a little too motherly and something she used on her four-year-old son, but coming from a woman five years older than him, made him feel pathetic.

She stared at Damon and Michael. “So which one do you like?”

“Excuse me?” he asked, hoping he heard her wrong.

“Which man do you want to fuck?”

This was the first time he’d heard her use crude language. Maybe that’s why he didn’t stop the words before he said them. “Both. I want them both” he admitted out loud for the first time. He gasped at his honesty.

She laughed and slapped his shoulder. “That’s ambitious. I’d start with one then move to the other. Otherwise, you won’t be able to walk the next day.”

“Of course,” he forced the laugh that would turn his comment into a joke. His dreams already told him the truth. He’d take them both on at the same time, relishing each touch and begging and pleading for more. He scratched his head and looked back at the men dressed in black. For the first time that afternoon, he wondered if he’d live long enough to enjoy sex with the two strangers.

Moans from down the hall stirred the fire, making the flame blaze with need. He swallowed. Another lust-filled moan rang in his ears. Jessie curled his head into his knees as the sounds of passion continued. Every inch sizzled, but he bit down on his lip. Enough was enough. Some people were trying to sleep. He stood, planning to tell the other two to keep it down, but as he headed toward the bedroom, the determined resolve fizzled out. Each step became smaller than the last as he inched toward the bedroom.

The pull of animal passion drew him to the door. The sound of flesh slamming against flesh and moans of lovemaking left him frozen. His plan to tell them off was no longer an option. He forced a hand forward and reached out to touch the knob. His hand dropped. It was wrong to watch, but one little peek should be okay. After all, he had been invited to participate. He licked his lips as he remembered the taste of the two men. Sucking their cocks hadn’t been enough. He wanted more.

No. He shook his head. He couldn’t join them again. If he became lost in their embrace, when the dream ended, he’d be alone, and it would end. They wanted to add a little spice to their sex life, and right now that was Jessie. When they got tired of his flavor, he would be out in the cold. If he allowed the dream, he would break when it was over. How could he go on alone after knowing such pleasure? Another moan. His hand trembled on the doorknob. He nibbled at his lower lip and turned the knob.

A lamp was turned on, strange in a room with two nonhumans. The brightness acted like an invitation for him to watch. He hissed when his eyes found Damon and Michael.

The bed creaked under the two bodies moving on top of it. Michael was on his hands and knees as Damon kneeled behind him, thrusting long and hard into his heat. Michael threw back his head and arched his back as Damon leaned forward and placed kisses on the other man’s shoulder. Hips never stopped moving. Both men couldn’t get enough of each other. Bliss was etched on their faces.

The speed of each thrust betrayed Damon’s nonhuman status. Michael moaned and then pushed back to meet Damon’s hips. Jessie swallowed, not sure if he could take Damon’s cock. Michael’s hand rubbed at the shaft between his legs, reminding Jessie that Damon’s cock wasn’t the only big one in the room. As Michael stroked, Damon plowed into him.

Jessie’s mind filled with images of other positions, Michael ridding Damon, legs spread wide as Damon rammed into him and Damon pressed against the wall with Michael thrusting into him while kissing and licking down his neck. The images were too real. Each position and facial expression weren’t fantasies, but events that happened. These two men had loved each other in every way possible. He blinked. It was no use. The images kept coming. A whimper and moan pulled him back to the present. Jessie swallowed. What was that?

He rubbed the front of his boxers. The sight sent a shiver down his spine. Damon pulled out of Michael and turned him onto his back. Michael spread for Damon, who slid right in. The two moved with rhythm as they slid together. The bed creaked underneath of them. He tried to look away. He knew he needed to, but couldn’t. His knees became weak, but he held onto the doorframe and watched as the two men continued to move on the bed. He wanted to join them, but they were perfection, strong and powerful, and he was weak, an intrusion that didn’t fit into their lives.

As the thoughts entered his mind, both heads snapped up and turned to look in his direction. Jessie bit down on his lip. He’d been caught.

Michael licked his lips as Damon thrust into him. The brown eyes turned yellow. Jessie swallowed. Damon leaned down and bit on Michael’s neck. The other man cried out and Damon turned back to look at Jessie. The ice-colored eyes burned with a promise to rock his world. Jessie took a step back.

“Join us,” Damon said in a voice that offered to give him hours of pleasure. If he took a step forward, then he’d belong to them. They’d carve their touch on every inch of his body and fill him with their warmth. 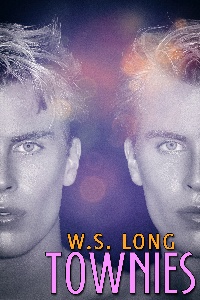