The Firemen of Ladder 1

The moment certified personal trainer Courtney Robinson laid her eyes on fireman Ryan Cornell, she was hooked. The muscular and handsome fireman must be starting more fires than he was putting out. Ryan was certainly the first man she had lustful thoughts for since her heartbreaking divorce one year ago. When Ryan requested her Monday Moaning gym class, the fiery blonde jumped at the chance. Who would have known that their passion would ignite a flame that rocked them both to the core?

The Firemen of Ladder 1

More From The Firemen of Ladder

She put a hand flat against his chest to stop him, like a traffic cop at an intersection. “Are you really a fireman?”

His smile was warm, like the sun on a bright spring day. “Firefighter Cornell from Ladder 69 at your service. What can I do to help you?”

Ryan chuckled. “Seriously. That’s the name of our truck.”

That damn perfect smile of his made it difficult to focus. Don’t fall apart, Courtney. Her eyes narrowed. “Tell me what a backdraft is.”

Ryan grinned in challenge. “Do you even know?”

She crossed her arms, covering her breasts. “I’ve heard about it before in movies.”

Leaning forward, he gently kissed her lips. His gaze softened. “I don’t think you know anything at all about it.”

“You’re on the right track.” Ryan nodded. “A backdraft is when a fire is starved of oxygen. The combustion ceases, but the smoke and the fuel gases remain at a high temperature.” He put his hands on her shoulders and rubbed with his fingertips in a seductive manner. “If oxygen is reintroduced to the fire, like someone opening a door to a closed room, combustion can restart often resulting in an explosion as the gases heat and expand.”

“Just one.” She stared him in the eyes, looking intently from one aquamarine wonder to the other. Ryan stared back with a force of heat making Courtney feel like she could melt. Try as she might to find something wrong with him, she couldn’t. Her gut feeling was that it felt right. “Can I trust you?”

“Of course.” Ryan’s jaw dropped and lines creased his forehead. “You could trust me with your life, Courtney.”

She let out a breath and those troublesome thoughts vanished like a paycheck at bill paying time. His sweet smile returned and alleviated any remaining doubt. His answers were good enough for her. Turn on the green light and turn off the doubt. Ryan was the man for her first time out after the divorce.

She stared at his chest, taking in his perfectly sculpted pectorals. His upper body was strong and hard, like she knew his cock would be. She put both hands on his chest to feel the warm skin.

Ryan looked intently at her feminine mounds with the pale, pink nipples. He placed his hands on one soft breast, then the other. His thumbs teased the already pebbled nipples. His fingers squeezed the aching, needy breasts, then he leaned his head down. Putting his lips over one, he sucked it deeply into his mouth as he rubbed the other with a firm hand. She arched her chest out for him and leaned her head back. She came alive with his touch. It felt wonderful to have a handsome man give attention to her breasts. It had been too long.

He went back and forth kissing, sucking, pulling on her nipples until they stood at attention, wet with his saliva. They tightened and tingled. Ryan’s lips traveled over her breasts, taking the fleshy parts into his mouth and sucked gently. She moaned with a yearning she hadn’t recognized in ages.

They kissed deeply, one more time, exploring each other with a fierce intensity. She found herself slipping into another world, losing herself in sensation.

“Lay down on the bench,” he whispered.

Before she knew it, she was laying horizontal on the bench as he had requested. 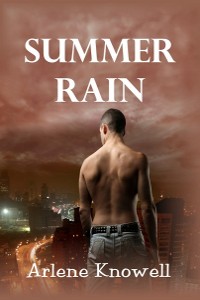