Rural farm girl Zane Larson finds out that not all strange things happen in large cities when she discovers a body planted in a suitcase on her farm. She falls in love with FBI Agent Tim Casey, the investigator of the crime. At first, she thinks he is a rotten apple, but as time goes on, she comes to realize that he is worth saving.

Determination and courage are among the things that Tim sees in Zane that make her uniquely different. When she refuses to give in to threats and scare tactics, and sticks by her principles, Tim knows she is the gal for him. He has some determination of his own, and knows he is in love the first moment he sees her. Will Tim take a bride before he can solve the case?

When I read the blurb I picked this to read because it looked like it had a story beyond the romance, which personally I think makes a much more rewarding read. So story I wanted- and story I got! The prologue takes us right into the bad guy’s head and we know this is not going to be an easy ride for our heroine even before we’ve met her!
Then right from the first page when we do meet Zane we are plunged into cattle country in Missouri and the disconcerting finding of a body in a suitcase on her property. Zane is a gun totting (we Aussies can be a bit so-so about guns but here it seems right- besides she might need it after the prologue introduction to one sick guy) horse riding cow girl who has risen above a dysfunctional family that keep coming back to haunt her. The pink haired cousins are a cute relief in the otherwise seriously male world.
So story? There’s cattle rustling, a good deal of ominous trucks and people watching her for unclear purposes, people unhappy with previous land deals and the drunk ex-boyfriend who Zane is more than capable of dealing with. Particularly when Tim the FBI agent is on the scene and looking a whole much better option even if Zane doesn’t think she’s got time for a relationship. I would have liked to have seen a bit more of him and maybe some earlier tension, but the romance and sensual sex is there and of course all gets pulled together in the end!

It was Monday afternoon when FBI Agent Tim Casey came whirling down the highway. When he hit the south side of the county, driving a black SUV heading west on Highway 90 toward Sugar Creek Bend, he mashed the accelerator down, ignoring the speed limit. He flew across the hard surface of the country road, daring the clock to tick. In a textbook landing, he pulled up in front of Zane Larson’s two-story ranch home in southern Missouri.

He unfolded his long legs on the ground without looking back toward the little town of Washburn that he had flown through in less than a flash. He loved the country, because that was where he had grown up, but he was on a mission and had no time to think about how sweet it felt to set his feet on farm soil once again.

Breathing in the fresh air, he had a feeling of confidence that he was there for a good reason. He was certain that he was in the Ozarks, because he could smell the crispness of flowing creek water, not to mention cow manure, mixed in with the aroma of freshly cut hay. Looking around, he wondered if he were on the same farm where Christ had lost his sandals. He could tell at first glance that there was only one house within viewing distance of Zane’s farm.

When he rang the doorbell, a blonde-haired woman with a ponytail came to the door, wearing a pair of tight, skinny-leg jeans that looked as if a tailor had made them for the leggy, brown-eyed Missouri girl of about thirty years old. The silver-and-gold wedding-ring loops dangling from her ears were a matched pair. When he locked eyes with her, he saw more than he cared to admit.

“Hi, there,” she said through the screen door.

He noticed that she was unmistakably his kind of woman and that she was a soft-spoken person. Her voice made his ears ring with music that sounded like words.

“You must be the FBI fellow that I asked to come out and help?” Placing her sunglasses on the bridge of her nose, Zane stepped out to the front porch, letting the storm door slam behind her.

A flash of uneasy tension slithered through her veins when she saw the spark that fueled Detective Tim Casey’s mind. She noticed that his face lit up as his eyes fed on her body.

He was suntanned and when he smiled, he showed a row of nicely aligned teeth. While guessing that he was about thirty-two to maybe thirty-five years old, she took an eyeful of his six-foot body and bronzed skin. He was a handsome brute with short, sun-bleached blond hair that flattered his broad shoulders, which tapered to a muscled, narrow waist. She assumed from his well-shaped arms that he had done some hard physical work at a gym. Blocking a warm rush accompanied by a storm of erotic sensations that were gathering in her veins, she shook his hand. “It’s good to meet you,” she commented, smiling but looking suspiciously into his flirting blue eyes.

When his partner stepped forward, he reached for her hand. “Howdy there, ma’am. This is a secluded, but beautiful, place you have out here.” He paused then added, “I ride shotgun for this wild man here that we call Tim the Gem.”

Physically, his partner was almost a polar opposite, with brown eyes, tan skin, and with brunet hair. His height accelerated above his normal stance with the cowboy boots that he styled fashionably. He was a size too large to be a shadow. Protective of his space, he was a handsome fellow, standing about six feet five inches, with aviator sunglasses in hand. Concealing his potbelly with a black, leather jacket, he sported a holster strapped over his shoulder. Tim’s sidekick had a graying line around the temples. He wore a badge on his belt, was large around the middle, showing that he apparently had a passion for one woman and tasty, rich food.

While Tim stood gawking, his partner took another step forward, introducing himself as Milo Williams, special agent. Making eye contact, he tilted his badge toward Zane as he offered her a card with the other hand. “They sent us out here to see if there isn’t something that the FBI should investigate,” he declared with a smile. “When my partner gets his wits about him and closes his gaping mouth, he’ll tell you that we are here to look into the suitcase murder by request of the local sheriff’s department, not because you called our office today. Sheriff Concord thinks this crime probably involves some federal immigration laws.” 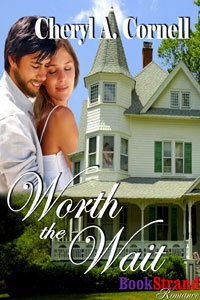 So Far Gone in You (MM)
Lynn Hagen
In Shelf
$4.99
Tweets by
sirenbookstrand