Chance Hastings is alone. The person he was closest to was ripped away from him and sent to the world below the high city. Chance is determined to find his sister, no matter what it takes.

Zephania Aroson is being hunted by his own race for believing their leaders were wrong. The more he saw of the people of Earth, the more he realised they needed to be afforded the opportunity to live. He wasn't willing to stand by and watch the extinction of an entire race because his leaders commanded him to do so.

By saving the life of the human, Zephania finds his mate in Chance Hastings. Together they learn of a legend surrounding Chance and his siblings. With the help of a group of freedomers, Zephania and Chance begin the search for them. Along the way, they save Zephania's own family, and a new legend is uncovered. 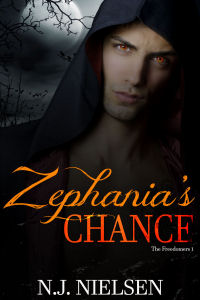 July 18, 5023 AD had changed Chance Hastings' life forever. His view of the world had been irrevocably altered, and there was absolutely nothing he could do about it. It had been a bloody rude shock to the system when he'd found out humans weren't the only intelligent race inhabiting the universe. He hadn't even been sure it had been aliens, as by all rights and reasoning they hadn't existed--or so he'd been taught throughout his life. Hell, who had he been kidding? The strangers flooding into cities all over the world were real honest-to-God aliens and not little green men, either. These were more humanoid looking. Word quickly passed from human to human that the aliens had come to take over the world and turn the human populace into mindless slaves. Others were saying the aliens had come to wipe everyone off of the face of the earth so they could claim it for themselves.

Chance was in the group who believed the latter explanation. So far, from what he'd seen, the newfound alien race was the "shoot first and ask questions never" kind of people. Chance sat against the side wall of Guardian Lowell's residence and took in the destruction around him, trying to come to grips with what he'd found. Inside the mansion, the whole Lowell family had been slaughtered, and by the state of the decomposition, they'd been murdered a good couple of weeks ago--if not longer. Deep down, Chance knew that if his first guardian had still been alive, the family would have helped Chance if they could. Guardian Lowell had been one of the few guardians who'd actually liked Chance and his siblings. The whole Lowell family had treated them as their own, rather than the wards they truly were. Instead, their lives had been forever changed the night they were taken from the Lowell's home to live with a new guardian family.

Chance's mind wandered over the distant past as he thought about how much their world--the world of the human race--had changed with each passing century. Once, there had only been Earth. Now there were interconnecting cities above the earth's surface--great cities, each joined to the other via endless corridors of housing. The wealthy thrived in the cities, and the areas joining each city were where the poorer citizens resided. Those people were known as bridgers. Chance had preferred his quadrant of the world rather than being one of the city dwellers. The one strange thing he'd seen was that there were no imperfect people in the upper world. It had taken a long time for him to understand why. Then it was only through overhearing one of his guardians talking that he realised anyone born less than perfect wasn't tolerated. Imperfect people were taken to the lower world then left to defend themselves as best they could. Chance didn't know how long the two worlds had been separated--or even why.

All he knew for sure was that it had been done a long time before he'd been born. He'd learnt since the day he'd eavesdropped on the conversation, how those in charge at the time the worlds separated had chosen who went up and who stayed behind, and the decisions hadn't been done fairly. The rich had been given preference. All criminals, the disabled, and the dirt-poor people had been left behind to fend for themselves. Families had been torn apart. People hadn't even been given the choice of remaining with their kin on the surface. They had been just rounded up and taken up to the shining new city to live, and basically told that if they didn't like it to get over it and start living their happily ever after.

Sometime Chance had to wonder why he, Faith, and Maven had been up in the city and not on the surface. They were orphans--or so they'd been told over the years by their guardians. It was odd for the three siblings to be allowed to stay together. Usually orphan siblings were separated and doled out to deserving families to use as they wanted. Faith had believed there was something special about the three of them, mostly because they weren't always treated poorly. At one time, people had actually given them respect. That was, until seven years ago when they had been transferred to their latest guardians. Something had changed, and in the middle of the night, they'd been woken and shipped out of the inner cities to live among the upper-class of the poorer citizens, although going from the life of luxury to being a bridger had been a blessing in some ways. Chance no longer had to pretend to be someone he wasn't. Luckily, Faith had been like-minded. A week after they had joined Guardian Kremmer's family, he and Faith woke up to find Maven missing, and the Kremmers weren't answering any of their questions about where their brother was. Seven years had passed since then, and the reality was that it didn't even matter anymore. Right now it looked like they wouldn't survive until the end of the week, let alone long enough to find Maven. Chance knew that if he were going to die, he was going to go out fighting.

Chance stilled as a small craft flew by overhead. If he didn't move, maybe they would assume he was dead. At least, he hoped they would. From the pattern of their flight, he surmised they were looking for something--or maybe someone. He hoped they found whoever it was before they found out that he was still alive and roaming free.

For the past three months Chance had been in hiding. It was more like he'd been on the run with Faith for the first two months, then in jail for the last month, and since getting out, he'd been on the run again for the last week. At least he thought it had only been a week. The day he'd been thrown in jail, the enforcers had carted Faith off, which scared the crap out of him for two reasons.

The first reason was because once the enforcers assessed Faith, they would send her down to the surface. His sister would now be classed as imperfect, seeing as she was currently deaf. She'd lost her hearing three months ago when Guardian Kremmer had come home after having had too much to drink and had beat her across the back of the head with the object he'd had in his hand, which, at the time, happened to be a hot frying pan--all because he hadn't liked what she'd prepared for supper. 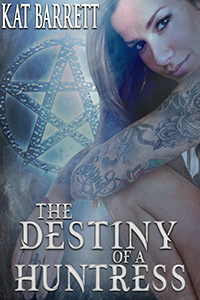 The Destiny of a Huntress
Kat Barrett
In Shelf
$3.99