High School junior Alex Johnson thinks he finally has his life all arranged to deal with his Asperger’s Syndrome, with the help of a handful of close friends and relatives. Everything threatens to fall apart when he suddenly finds his condition is really due to a one-off genetic treatment he had as an infant. Yes, the treatment saved his life, but now he’s going through incredible changes that threaten to stand all his hard-won relationships on their head. Suddenly, he finds he’s big man on campus—literally! 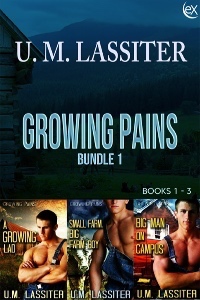 I started dreaming. I was in a large room full of people. They were all milling around, ignoring me. I started moving through the room toward a door. As I was moving, people in the crowd started coming toward me and saying my name. They started touching me. At first, it didn’t bother me, but then they started trying to hold me back, to keep me from reaching the door. As I got closer, more and more were holding me back. I nearly reached the door when the crowd started pulling me down, crushing me. I became aware that I had a hand over my mouth.

Suddenly, I was very, very awake. An arm was across my chest, holding me down. I panicked.

I stopped squirming and looked up through bleary eyes and into the face of Bob Leonard.

“I’m going to take my hand away, but I need you to be quiet,” he whispered.

I nodded as well as I could and he took his hand away. Mr. Leonard slowly straightened up.

“Your Gram knows I’m here. I need a blood sample.”

“She’ll explain everything,” he said as he took a little pouch from his coat pocket. “Let me see your arm.”

I was too flabbergasted to refuse. He took out a syringe and a swab and a piece of rubber hose and started to take the sample with a speed and efficiency that rivaled the nurse.

“It’s a long story. Longer than I’ve got right now.” He held up a newly filled vial of blood and seemed satisfied. He put it and the rest of the things into the pouch and slipped it back in his pocket. Then he picked up a folder that I hadn’t seen before and started examining it under the night-light. He finally spoke again.

“It’s important that you don’t tell anyone about this, Alex.”

More secrets. Terrific. He moved over to the counter and set the folder down.

“If anyone asks how your chart got here, tell them you don’t know. One of the nurses must have left it. Get it?”

“This is really important, Alex. So, get it?”

“Good. Your Gram will explain the whole thing.” Mr. Leonard took a look through the little window in the door, opened the door and stuck out his head. After looking up and down the hallway, he slipped out.