In 1896 Manhattan, Kristin Van Buren aches to be free of her repressive grandfather who wants nothing more than for her to get married. When she is ordered to discard any dreams of singing and to instead focus on debutante season, Kristin falls in to despair, knowing that the chances of finding a husband who will allow her to follow her passion are slim. Hope arrives, though, when she ends up at a weekend country retreat with Eric Westcliffe, who is suave, handsome, well off and when need be anything but a gentleman... 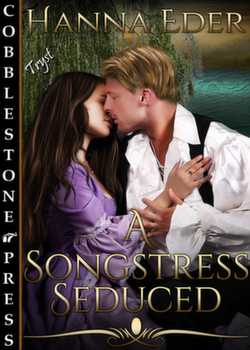 Kristin Van Buren exhaled in frustration. She had been at this the last hour, practicing Isolde’s Liebestod. Standing in the stuffy second-floor studio of her teacher, Signor Verdi, she was quickly becoming disheartened at her repeated attempts to sing the piece.

It was an important part—the most important part—of the whole opera, as far as Kristin was concerned. It was at this point in the dramatic tale of Tristan und Isolde that Isolde, mourning the death of Tristan, says her final farewell to the only man she has truly ever loved. It was despairingly romantic, and Kristin felt chills down her back each time she heard it performed. She had been trying for months to perfect her own rendition of it, but could never seem to do it well enough to please either her meticulous instructor or herself.

But she had to get it right. She had to. Failure was not acceptable.

All Kristin had ever wanted in the world, ever since she had been eight and attended her first show at the Metropolitan Opera, was to be a great singer. She had been studying with Signor Verdi for the last seven years, since she had turned eleven and the great teacher had finally agreed to take her on.

So she closed her eyes, cleared her mind, and opened her body to the notes.

“That will, I think, be enough for today. Until next time, Miss Van Buren.” Signore dismissed Kristin with a wave of the hand and promptly occupied himself with organizing a pile of sheet music. Kristin, for her part, did not take it personally. She knew the signore was a busy man—as he so often reminded Kristin—and she had long ago become accustomed to his eccentricities and displays of self-importance.

Retrieving her hat, Kristin moved toward the hallway adjoining the music room. Lined with a few straight-backed chairs, the hall served as a waiting room. Her chaperone would be waiting there for her. In all the years that Kristin had been taking lessons with Signor Verdi, Emma had accompanied her to each and every session at the corner of 32nd and Broadway.

Emma had been Kristin’s governess and primary caretaker since Kristin was an infant. Although the two were close, it had been years since Kristin had called the gentle woman ‘nanny.’ In fact, since Kristin was now eighteen, it was hardly necessary for Emma to remain in the Van Buren family’s employment, but Kristin’s grandfather had kept the lady on, as she was the only constant female figure in Kristin’s life. The girl’s mother and father had died when Kristin was only three, and Emma, in Kristin’s heart, was the young woman’s one and only true parent.

Fumbling to tie the silk ribbon of her hat with one hand while closing the door to the music room with the other, Kristin did not notice the man until her face slammed right in to his chest.

“Oh! Pardon me, sir.” She looked up to see whose torso she had collided with, and found herself gazing in to the eyes of a stranger—a very handsome stranger at that. He was tall, with wavy, honey-colored hair and blue eyes that, Kristin was sure, perfectly matched the May sky outside. She meant to apologize further, but suddenly found herself at an unexplainable loss for words. The man smiled, and there was a tiny thump in Kristin’s chest.

“Please don’t apologize. It was my fault…and my pleasure.” The man’s gaze bore in to hers. Kristin wanted to look away, but for all her intentions and hopes could not.

Behind the man’s shoulder she saw Emma, sitting in one of the wooden chairs with her crocheting in her lap, watching the exchange like a hawk. Kristin cleared her throat and was about to excuse herself when she was interrupted.

A girl of about fourteen wiggled her way past the man, shooting him a look of irritation, and disappeared in to the music room. Kristin suddenly became aware that both she and the handsome stranger had failed to move from the doorway where they had collided.

“My sister, Lydia,” the man explained. “And please excuse me for not introducing myself after so rudely bumping in to you. Eric Westcliffe.” He bent down to kiss Kristin’s hand and the thump she had felt before occurred again, only stronger this time.

“Kristin Van Buren. I am very pleased to meet you Mr. Westcliffe, but I must say, it perplexes me as to how we have not met before. If your sister is also a student of Signor Verdi’s…”

“Ah, well, Kristin Van Buren, my sister has only recently switched the time of her lessons from morning to afternoon. In addition, I don’t always accompany her; only on occasion, as today. Lydia’s governess usually escorts her, but the lady fell ill just yesterday.”

“I see.” Kristin strongly desired to talk more with this Eric gentleman, but couldn’t think of anything more to say. Her gaze fell dumbly to the floor.

“Well, Miss Kristin, shall we be going?” Emma stood behind Eric now, having collected her crocheting and put on her hat.

“Oh! I’m sorry. Yes, we shall.” Kristin moved across the hall, and then turned abruptly, only remembering her manners at the last moment. “My apologies; I’m feeling so flighty. Emma, this is Mr. Eric Westcliffe.”

“Pleased to meet you, ma’am.” Eric bowed again, and Kristin could not help but admire the elegant and fluid way he moved.

“I wonder,” Eric began, “If I might accompany you to your carriage? I am sure my sister will be fine without my care for a few minutes.”

Kristin glanced at Emma, seeking the older woman’s approval. Emma gave a barely decipherable nod of the head, and Kristin could not stop the pleased smile that spread across her face. “That would be lovely, thank you.”

Eric offered his arm, and Kristin gladly accepted it. He smiled again, and again the crazy thump, thump inside her heart began. It sounded to her so loud that she was afraid he might hear it.