Isobel Marlin is one of the most powerful mages ever born. She has been trained by her father and mother using any and all magical races to supplement her education.

He had been watching the motion of her breasts as she tugged on the bedding, and the pressure behind his zipper was threatening to burst it wide open.

"Your clothing had to be removed to ascertain the seriousness of your injuries. And because we are now hand fasted for one year. According to Realm tradition, you have until the waning of the full moon to come to me to consummate the union. After that, I will come to you."

She had a suspicious look on her face, "How long until the waning of the moon?"

His eyes lighting with anticipation and the smile on her face confirmed her suspicions. "About four hours. Then you're mine."

"Like hell." She scooted up in the bed, and kept the covers to her chin, "This isn't your company, and you can't just do something like that. It's unethical."

The shadow of anger flew across his features as her words struck him. "It may be unethical, but for mages it is quite natural. Either you come to me, or I will come to you. And you will welcome me."

"I don't think so." She crossed her arms over her breasts and hugged herself.

Suddenly, he leaned toward her and caught her mouth with his own. Without warning, his tongue swept inside to take possession. She moaned as heat flared within her, and her eyes widened as she felt the stirring of magic within her. His magic was pouring into her through his mouth and her body was coming alive. 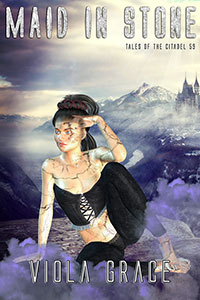