Plagued by guilt, Nicholas Hollsten ended his military career in the Special Forces and returned home only to be forced into a life he never wanted. Nick found himself running his father’s company and making good on a promise to his team. Angry and frustrated with the direction his life was taking, he calms his thoughts by filling his evenings and bed with soft distractions. Until one woman captures his interest.

Rebecca Klayton thought she was happy in her small town, running her bakery and avoiding love. That emotion only meant heartache and being left exactly where you started—alone. Lesson learned. But, when the sexy stranger from their hot New Year’s Eve party shows up at her counter, will she be able to ignore the temptation or will she find what she’s been missing in the Arms of Serenity? 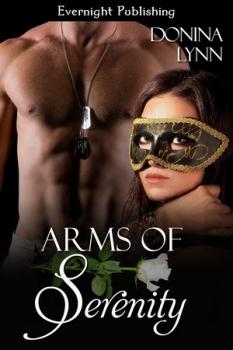 Becca got as far as the curve outside before she heard Nick’s voice calling her name. She closed her eyes and groaned.

Why was he following her? Couldn’t he just leave her alone? She held up her hand to signal a taxi and hoped ignoring him would work until one stopped.

Becca heard him say her name again. Only this time he was too close to pretend that she didn’t hear him. She turned to find him holding the picture frame.

He just wanted to give her the frame. She sighed in relief and reached to take it from him.

He looked at her and put a smug smile on before saying, “You forgot these also.” He reached into his pant pocket and pulled out a glimpse of white lace material.

Becca gasped when she realized it was her forgotten panties. She got closer to put her hand out.

“Thank you for finding them.”

Nick pushed them back in his pocket. “How about that coffee?”

Becca took a step back and crossed her arms. “Are you seriously holding my underwear hostage until I go out on a date with you? Doesn’t that border on blackmail?”

Nick laughed. “Just using whatever means I have at my disposal to get you to say yes.”

Becca would laugh too if she wasn’t so angry. He was being an arrogant pushy ass. She glared at him. From his polished shoes, tailored pants, and what looked like a cashmere sweater, he was head to toe everything that Becca wasn’t. Why was he doing this? Damn him for coming after her. Damn him for wanting more when he could go back into the ballroom and have anyone of those models sitting at the table.

“You’re not my type.” She turned away from him and once again put her hand up in the air.

She stood there not wanting to look back. He hadn’t answered her, and Becca silently hoped that he had walked away. She was a mess. Her insides trembled at the conflicting emotions of anger and longing coursing through her. It would be so easy to give in and go with him.

“I’m going to have to argue that statement. I seem to remember being exactly your type last night as you shook and screamed in pleasure when I was buried deep inside of you.” He kissed the spot behind her ear, and she gasped in response. Shivers cascaded through her, and she leaned back melting into his body.

Dammit, Becca get some control! He’s just a rich guy who thinks he can get anything he wants.

Becca pulled away and turned around to face him as a taxi finally came to her rescue. Opening the door, she stood behind it to use as a barrier between them and took a breath to steady her trembling legs and gain some courage.

“Nick, last night was great, and thank you for not saying anything back in there.” She nodded her head in the direction of the hotel and continued. “But I’m just not interested.” She got in the cab, closed the door, and stared ahead as she gave the driver her destination. As the taxi pulled away, she could see him in the rearview mirror. For the second time in less than twenty-four hours, she left him just standing and staring after her.