Living in the wastelands, Quincy and Tegan eke out a meager existence as scavengers. Tegan secretly has an insatiable crush on the man who saved her from a slave’s fate five years earlier. But Quincy is unaware of Tegan's feelings for him, and in truth, he harbors the same desire for her.

In the town of Last Chance, Quincy goes though his normal routine. He barters for goods with his findings, has a nice warm meal with Tegan and beds one of his favorite harlots, Hannah. This time, Tegan shows her aggravation and decides to make Quincy jealous by taking Jimbo, the local merchant's son, to her apartment.

Quincy McAdams and Tegan Sparrow survived Armageddon, but will they survive each other?

The inn was reminiscent of a tavern from the 1860s, with gambling tables and a full bar on the main floor and with small rooms for rent on the second level. The grand room was loud with scantily dressed bar maidens busily serving drinks to the local drunkards. They didn’t seem to mind the excessive groping that went along with filling the drink orders. Tegan witnessed one inebriated patron slide a hand under a serving girl’s skirt. The barmaid was young with dark red curls framing her slender face. She allowed the older man to feel between her legs for at least a minute before she pushed his hand away and went back to delivering drink tankards. The older man, dressed in overalls and a straw hat, brought his fingers to his nose after she left. Tegan, dumbfounded, grabbed the barmaid by the arm.

“Why did you allow him to do that?” she asked.

The redhead smiled wide. “You have much to learn, honey. Mr. Hill is the best tipper in this place. He may not look like much, but he is loaded. You don’t bite the hand that feeds you.”

“Well, Tegan, for five caps, I can take you upstairs and blow your mind,” the redhead replied, wrapping an arm around her shoulder. Then she said in a low voice, “I will promise you two mind-shattering orgasms. I can do some amazing things to you with my tongue.”

Tegan’s mouth fell open in astonishment. “Thank you kindly, but no.”

“Whatever…your loss. If you change your mind, the name’s Nina.” The barmaid winked at Tegan, then went back to her duties.

She ignored the offer and searched for Quincy. The main floor was dimly lit with overhanging lanterns that added an amber glow to the opulence of the room. It was a place that catered to men and their needs, a place where ruff-neck laborers could come for a meal, relax, drink, get laid—whatever. It was all so vile to Tegan, but she wanted to see Quincy for dinner. It was their ritual.

Tegan joined the man she had been searching for in a private corner. A plate with roasted potatoes and a large juicy steak was waiting for her. He knew what she preferred and had taken the liberty of ordering.

“You look different tonight,” Quincy said, taking another shot of homemade whiskey while watching her devour the meat.

He finally noticed, she thought. She was wholly clean for once and even had the time to do her hair, twin ponytails that she braided and looped behind the ears. And she had applied a little red color to her lips with the rare find she had Quincy purchase at Big Earl’s. She smiled ruefully. “Different as in good—right?”

Her spirits soared for a while. Quincy actually began to notice her, but that attention quickly faded when a blonde harlot slid onto his lap. That bitch.

“Where you been, stranger?” she asked Quincy in a husky voice. Her tight, red latex fuck-me dress barely concealed her ample breasts that were pressed firmly against Quincy’s chest. Like a magnet, her lips went in to taste Quincy’s, her tongue darting into his mouth. Fury rose inside Tegan as she watched the prostitute, Hannah, work her black magic on Quincy. Tegan hated her, not only because Hannah was good at taking his money but also because she was the most gorgeous prostitute in all of Last Chance—tall, leggy, with curly blonde hair that fell around her pleasing features just right.

“Counting down the days until I see you, honey,” Quincy replied after Hannah unhinged her mouth from his.

Okay—that did it, Tegan told herself. She would puke any second now.

Hannah then cast her gaze toward her, and Tegan tried to disguise the flustered look on her face. “And how are you, little sparrow?” she asked in a tone that told her to fly away.

“What?”  Hannah’s shock registered on her face.

“I said, thank you very much. Nice of you to ask.” Tegan never drank hard liquor, but tonight she was in need of a few. Taking the glass in hand, she poured herself a tall shot and threw it back. It felt like liquid fire in her throat the second she swallowed. She wanted to purge it from her body immediately, and it took every ounce of her concentration to hold it down and to put up a façade of enjoyment.

Quincy glanced at her sternly. She had never tasted a drop of home whiskey in her life. Why now? “You drinking tonight, Tegan?” he asked skeptically.

“So what if I am. Is there a problem?” she sneered back.

“No…no problem. Just didn’t realize you had a stomach for the hard stuff.”

She slid her empty glass across the table to Quincy. “Fill it,” she ordered. He removed the cork and topped three glasses.

She gasped and reared her head, feeling his mouth torment her. Her need was getting worse, and she ground her pubic mound into his stomach, his rock-hard cock grazing her inner thighs and sensitive lips. She struggled to breathe as he laved one nipple, then the other.

She needed him inside her…now!

Tegan released a deep moan, fisted his chest, and angled her hips until the head of his penis rested under her opening. With a slight arching motion, she urged Quincy to enter her. But his cock only teased, and his great strength prevented her from feeling the sensation that she had dreamed about for so long. She fought harder against his hold, the tip of his cock touching her wet folds, but he denied her.

Betrayed, she pushed from his chest, reclaiming the nipple from his mouth, and stared down at him coldly. She had a sudden urge to punch him—to punch him hard in the face and say, “What the fuck?”

Quincy grinned, his smile bright as burnished steel. “What the hell are you doing to me?” she said achingly, almost desperate. “Why are you holding me back?”

“Trust me, Tegan,” he said, his voice low and penetrating. “You are mine, and we will not rush through this. I am in control of this one.”

“Whatever—we will see who is in control here!” she said, slapping his chest. She sank back against his cock, but he held her in place, keeping her hips stilled. She rubbed her clit against his stomach, straining at him for more stimulation. Even with a bum right shoulder, he was ridiculously strong.

At this point, she had doubts and really didn’t know, but she reluctantly nodded anyway. Quincy shoveled her to his face, and she gulped having no idea what he had in store for her until her thighs were straddling his head. Her moist pussy lips nudged over his open mouth, and he consumed her, nipping at her from below.

Spreading her gently with two fingers, he lapped at her wetness, flicking his tongue over her ever swelling clit, then sliding it back into her opening. Widening his mouth farther to taste her sweet muskiness, she felt her excitement flowing.

She felt the warm rush of fluid pouring out of her body as her inner walls contracted, seizing his tongue.

She felt his rising urgency as he laid her down on the soft blanket and slid his hips between her spread legs, pressing the head of his throbbing cock against her soaked slit.

She was still in a wondrous delirium from her first orgasm but snapped out of it when his lips, glazed with her own nectar, touched hers. As he forced his tongue into her open mouth, she licked at his chin, inwardly embarrassed at the newly found fact that she enjoyed her own heady flavor. She decided to keep that tidbit a well-guarded secret as she kissed him with increased intensity.

Feeling the slow stretch of her folds, she gently shoved his ravenous jaw away. “You are my first,” she admitted softly, seductively.

Quincy stroked the side of her cheek. “I will go gentle,” he assured her in a hot breath that touched her neck, sending tiny tingles down her spine that resonated to every cell of her body. Even his words had an orgasmic effect.

She hooked her ankles around his back, and his full weight was upon her. She felt the tip easing into her, stretching her more and more. Pain and delight together in strange mix of sensations. Was he too big for her? Panic set in at the thought. “Fuck!” she screamed, squeezing the back of his neck.

Every inch was taken slowly and methodically, her inner walls so tight she thought it would be impossible for him to penetrate her fully. She arched against the pressure and yelped, clawing at his back.

“Am I hurting you?” he asked delicately.

Halfway inside her, she felt him give pause, to begin extremely slow, but steady, strokes. Her legs cinched tighter around his back with every short thrust. She winced and panted heavily beneath him, her hands clutching his back. His stroke lengthened inside her, the muscled walls constricting his movements, folding around him, encasing his cock in a blanket of warmth.

He tried staving off his climax, but each second proved more difficult than the last.

As he smoothly drove himself into her, the initial pain was replaced by pleasure, and a wave of delight enveloped her body. He was like a pleasure machine pumping her into ecstasy. 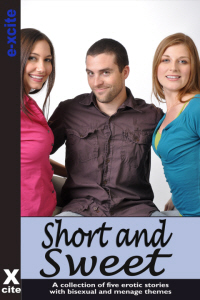