Be Tender with My Love (MF)

Be Tender with My Love (MF)

“You leave her alone,” ten-year-old Chen Wang shouted at a bunch of kids from the elementary school who was bullying his best friend Fanny.

“Her mother is a whore,” one of the kids said in Mandarin. “So is yours.”

“That’s it,” Chen said angrily. He charged at the bigger boy messing with Fanny, catching him off guard and knocking him to the ground.

The other kids gathered around them shouting encouragement as they fought. From the sound of things Fanny too was battling with someone who was hurling racial slurs about her origin.

Even though the nine-year-old was born and had lived in Geylang all of her life, her dark skin and thick black hair were a dead giveaway that she wasn’t Chinese.

Chen continued to punch the guy in the face until he finally stopped struggling. Someone grabbed him by the scruff of the neck and pulled him to his feet. It was Han Sung, one of the other kids in the neighborhood who often played with Chen. “Get off. He’s not worth it.”

Chen dusted himself off and hunted the crowd for Fanny.

She stood off by his rival Quan Guo in tears. Her dress was torn and dirty and her hair had come loose from her ponytail holder. Chen walked over to her as Han shooed the other kids away. “Get your asses home.”

“Are you okay?” Chen asked Fanny.

She nodded and wiped at her eyes. “My mother is going to be angry because my uniform is torn.”

“I’ll buy you another one,” Quan said.

Chen frowned at him. “Save your money. “I’ll get my mother to mend it for her.” His mother was good with sewing when she wasn’t busy with her visitors. They didn’t need handouts from Quan just because he came from a rich family.

“I didn’t mean to insult you,” Quan said to Fanny. “I just don’t want to see you cry.” He bowed and left.

Han walked over to them. “Are you two okay?”

“I’m ashamed of our people,” Han said. “Forgive them Fanny. One day they will change.”

One of the things Chen liked about Han was that he always treated everyone one fairly and didn’t look down his nose at them just because they lived in a brothel. Han’s family owned a fish market not too far from where they stayed. They weren’t rich, but they were respected, something he and Fanny weren’t.

The three of them started walking towards home, once Fanny and Chen located their book bags.

Fanny still fiddled with her dress.

“When we grow up I will buy your hundreds of pretty dresses and marry you,” Chen said to her.

“What kind of work would you do?” Han asked Chen.

“I don’t know, but it won’t be cleaning up behind a bunch of whores like I do now,” Chen answered.

“I’d like to work in a fancy hotel,” Han said. “And I’ll never have to see another fish unless I’m eating it at a restaurant.”

“What about you Fanny? What do you want to be when you grow up?” Han asked.

“A mommy,” Fanny answered. “So I can cook and bake cakes and play with the babies.”

Han teased Chen. “You better make plenty of money then. You’re going to need it for all of your children.”

Chen laughed too, knowing that Fanny only said this because she was lonely. None of the other kids in the neighborhood would play with her. They teased her and called her dirty because he mother was a prostitute. He, on the other hand, was very popular because his mother was one. His friends were always dropping by trying to sneak a peek at the women as they paraded around half-naked for the customers. Fanny never said much, but Chen could tell living in a brothel embarrassed her a lot. He feared for her safely too, because Madam Ju always threatened to make her work as a whore once she reached puberty. Chen didn’t know when that was supposed to happen to Fanny, but he promised that he’d take her away somewhere before Madam Ju got her hands on her.

“Look, something is happening at your house,” Han said pointing straight ahead of them.

They were about a block away, but close enough to see the police cars and the flashing lights.

Chen did not think so. Madam Ju’s place had been raided numerous times and the police usually rode up with a paddy wagon to cart the whores and the johns off.

An ambulance raced past them.

The three kids hurried to see what was happening.

Chen had a funny feeling in the pit of his stomach like something life-changing was about to take place.

“This is my room,” Chen announced once she had stepped inside. Enlai had changed the linens and turned back the covers. A bottle of champagne and two glasses rested on a small bedside table. The lights had been lowered, the music set the ambiance and he was in the mood for a little romance.

“Ooh,” Maria said as he took her hand and danced her around the carpeted floor to the song playing over the stereo. It was nice and slow and Maria felt good in his arms as they slow danced to it. She pressed her head against his chest. “This is so nice, Chen.”

Chen kissed her on the top of the head. He didn’t think this day would ever come. He’d dreamed it so many times, right down to the dancing. By the end of the song his lips were on hers and she was responding beautifully to his touch. “I want to be with you Maria.”

“I want to be with you too,” Maria said. She took his hand and led him over to the bed. “Someone has gone to a lot of trouble to make this night special for both of us.” She gently pushed him to a seated position on the mattress and she began dancing alone just for him.

Chen watched in amazement as the sweater she wore disappeared and she stood before him in just a bra and her pants. He wiped his brow. The champagne was starting to make him sweat. Maria unbuttoned her pants and danced them down to her feet. She stepped out of them and showed him some fancy dance steps wearing only sexy black underwear. “Ooh, work that thing,” he said to encourage her. She just smiled and turned her back to him and nearly gave him a heart attack when she removed her bra and tossed it on a chair. She turned around and he got his first glimpse of the best set of breasts he’d ever seen, and he’d seen a lot. Mother Nature had not been stingy. She also had a small waist and wide hips. He liked women with some meat on their bones.

Chen stood up and went down on his knees before her. “Allow me.” He slipped his fingers into the waistline of her panties and slid them down over the curves of her hips and down her legs. Maria stepped out of them. Chen brought the panties to his nose and sniffed. Her scent just drove him wild.

“Very much so, Miss Santos.” He planted a kiss on her thigh and Maria giggled. She sounded just like Fanny. He rose and led her over to the bed. Maria sat down and turned her attention on him. Marvin Gaye’s “Let’s Get it On” now played.

He didn’t have a shy bone in his body. Chen danced for her stripping out of his sweater and shirt and then opening his belt while wiggling his hips.

Maria clapped and laughed at his antics.

Luckily he was wearing new underwear.

Maria’s eyes widened as his pants went in one direction and he stood before her in black briefs. She didn’t make matters worse by singing the song along with Marvin. She slid off the bed and went down on her knees before him. “May I?”

Marie ran her fingers up his thighs and then grasped the waistband of his briefs and slid them down to the rhythm of the sexy song. His penis came out to greet her. “Chen, you’re big.”

Chen chuckled and stepped out of the briefs. He swept his Brazilian sweetie up in his arms and carried her back to the bed and put her down on it. He poured them some champagne. Honghui had let it slip once that Maria got a little saucy under the influence of the bubbly. She down the glass and handed it back to him. He looked into those dark brown eyes and they smoked. The sexy little smile on her face meant she knew exactly what he was trying to do.

Chen polished off his drink and joined her on the bed for a little “Sexual Healing.” Maria pushed him down on his back, bent over and kissed him and then proceeded to lick her way down his body while humming the song. It was the sexiest shit he ever experienced because she didn’t miss a lick or a beat. She rose and began dancing over him as he looked up at her.

“Sexual healing makes me feel so fine,” she sang as she serenaded him with her body. He’d never seen an ass move so seductively before. “Let’s make love tonight,” she said as she went down on her knees and crawled between his legs.

“Maria, do you know what you’re doing?”

She raised a thumb in the air and then went down on him.

“Oh shit!” Apparently she did know.

That damn Enlai had put on the extended version of the song into the machine and Maria was using it to her advantage to give him a lot of tongue play. His cock rose to the occasion as soon as she licked his balls. She gave them a gentle squeeze. “This is to wake up the little swimmers.” She went back down on him, slurping and taking him deep into her warm mouth. 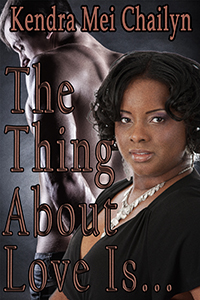 The Thing About Love Is...
Kendra Mei Chailyn
In Shelf
$4.99 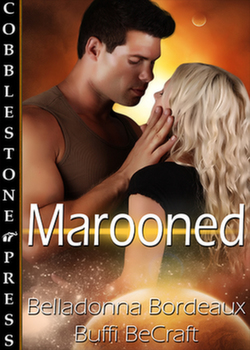