From time immemorial he has walked among us Some would call him a God; others call him the Devil… A lifetime of sacred belief cast aside for one moment of perfect love

Amon traded his soul, his mortality and the only existence he had ever known to save the life of one woman, a beauty who forever marked his heart with the color of her eyes.

Aziza was as beautiful and innocent in her newborn life as she had been before the ancient sacrifice that took her from her one true love. She was also in danger of losing her mortality once more to the very demon that craved her blood centuries ago.

As their souls meet again and come full circle, Amon vows to defeat the ancient evil that denied them their destiny for far too long. This time he won’t allow himself to fail, because he now knows the truth--He can’t live without her, and yet he cannot die… 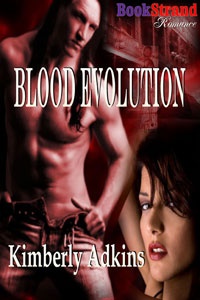 4 STARS: "This story see-saws back and forth between present day with Amon and Alana so while reading you’re exploring two very different timelines. I must say Ms Adkins did an awesome job of running the two timelines without confusing the reader. The way Amon used the journal to tell the story of what led to his predicament was very skillfully done and ensured that the reader ended up empathizing with Amon. The characters were believable and the main characters were likable." -- GJM, Rites of Romance Reviews

"I have to tell you right off that this book is wonderfully wrought. Kimberly Adkins takes a similar and unusual tack with her novella, Blood Evolution, and allows the reader to go on a ride that spans the ages. Told through snatches of journal entries interspersed with the contemporary action, she has crafted a tale of ancient wrong, and lovers torn asunder in a previous life, only finding themselves faced again with a battle of life and death. It is unusual, delightfully written, and a total feast for those who look for a different kind of vampire story. Blood Evolution by Kimberly Adkins does not disappoint!" -- Rose, Romance at Heart Magazine

"Ms. Adkins has definitely written a sweet tale of true love and destiny. I do think it is a good read and recommend it to those who like a different twist on the Vampire story and a few different twists and turns. Her ability to captivate the reader through the characters' words is simply awe-inspiring." -- Mindy Ferrari, ParaNormal Romance

Though the hour was late, I felt vulnerable out in the open oasis, and a primal need to protect the beauty at my side rose sharply in my chest. Without a word, I pulled her away from the falls and into a secluded alcove of worship where I knew we could be alone.

I had to wonder then how innocent my intent was when I came to the lodge, because now that she and I were safely unobserved, I found an overwhelming desire to explore these new feelings which possessed my every thought and movement.

“I must see you.” The words came on their own from the depths of my soul, and she nodded in acquiescence as if this were a perfectly normal request.

With agonizingly slow movements, she reached up to her headpiece and began to undo the clips that held her covering together. The soft, black fabric of her simple tunic slid away from her arms and my breath caught as her tiny, delicate wrists were revealed.

It was everything I could do to keep myself from capturing her hands, before they could complete their work, so that I might touch the fragile veins near the surface of her skin with my lips.

Only the burning desire to see the whole of her face kept my attentions at bay and, when she finally pulled away the covering, I was stunned as her glistening hair cascaded down her back like liquid obsidian.

Her face was lovely beyond compare, with the high cheekbones of a queen accentuating her full, sultry lips. She was everything a glorious vision of Mediterranean beauty should have been, with the grace and stature of Macedonian royalty.

I had never seen anything so lovely in all my years, and I desperately wanted to throw her veil in the fire so that it could never cover such a wonder as her face again.

“I have been promised to the God since my birth.” She breathed the words reverently as she came closer to me. “I know it would be wrong to love a mortal man and I never gave it thought because I knew it could not happen. I think I need to discover how wrong I have been on all accounts.”

She was bold in her movements! I could see the fear in her eyes, but I could also see the desire as she unlaced my tunic with determination.

I did not judge her for her actions. I had the same feelings for her that she had for me, and she was on the eve of her deathbed before she ever had the chance to live. I could not know what I would do in her stead.

She slipped the rough linen shirt from my shoulders, laying my torso bare, as her fingers lingered on the smooth skin of my chest. The thick layer of muscle did nothing to muffle the rapid beat of my heart as she traced the contours of my form. She worked her fingers down, watching their progress with a kind of fascination. I knew she was innocent of all carnal pleasures, because it was one requirement of a sacrifice to the God.

Her fingers found my navel and she kneeled down to taste my salty skin with her trembling lips. I was terrified that she would brush against my hips and feel the full effect of my arousal, so I wound my fingers in her hair, guiding her mouth in ways that I could control, though I was not sure how much longer I could maintain restraint.

Her fingers circled the front of my waistband, slipping inside and probing for something that she could not possibly be ready for.

I cupped my hands at the base of her neck and raised her to her feet, pulling both of us as far away from the doorway as possible and into a shadowy corner.

“I cannot believe that the feelings I have for you in my heart could ever be wrong,” she said to me softly as she stood on tiptoe to brush her swollen lips against mine. “Either way, I die tomorrow evening. I would rather know the love of my soul mate when I pass into the next realm than leave here an empty shell of unfulfilled dreams.”