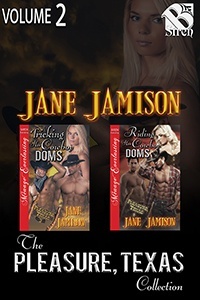 She slowed down, easing around a couple who were too busy kissing and fondling each other to notice her, then came to a stop.

Owen and Ryce were as sexy as always as they stood talking to Paul. They wore their usual perfect-for-their-bodies jeans with roughhewn boots and simple long-sleeved shirts with the cuffs rolled up. According to the club’s rules, they both held their hats in their hands. Their hair was mussed as though they’d just walked in from the brisk October wind. She figured they must’ve forgotten to leave their hats in the front foyer with Lindsey, the receptionist.

If a girl could order exactly what she wanted in two men, they’d fit her order perfectly. Judging by the one time she’d stood close enough to measure, she’d guessed them to be at least a couple of inches over six feet. She was tall for a woman, around five nine, but they made her feel small, even dainty.

No matter what kind of clothes they wore, she’d bet she’d still be able to see their muscles. Funny how their arms could look so strong, so muscled, and their round tushes could seem soft enough to bite. Unlike a lot of men who tried to look like cowboys, they were the real deal. They worked for Paul and Destin, content to remain ranch hands, even though rumors said they could easily afford their own spread. She wondered. Did that mean they lacked ambition? Or were they men who were so comfortable with their lives and in their skins that they didn’t need to own a ranch? From what she’d seen and heard so far, they were far from unambitious or lazy. And most of all, she’d heard they could be trusted.

Trust. She’d love to trust them with her secret. If anyone could help, she had a feeling they were the men who could. But even though she ached to put her faith in them, she couldn’t take the risk.

If only I could’ve met them some other place and time. And off the job.

They were so physically alike. Tall, gorgeous specimens of men any woman in her right mind would love to have in her bed. And yet, once she’d gotten to know them, she’d realized they were their own persons. Ryce was funny as hell, always trying to make her laugh. He was quick on his feet and never seemed to get thrown for a loop no matter what anyone said. It was as though a bomb could go off at his feet and he’d simply ask if anyone needed ear plugs.

One night soon after they’d met, she’d had to stay and help close the club. Ryce had helped her, showing her what to do. Although closing up shouldn’t have taken any longer than an hour, it had taken them almost two hours. She’d been so busy laughing at Ryce’s jokes and his impersonations of several of the club members and employees. Somehow he was able to bridge the gap between humor and sexiness and combine them into one amazing package. Even with all the laughing, they’d come close to kissing, the sexual element between them growing stronger and stronger. At last, once they’d finally finished doing everything they’d needed to do, she’d said her goodbyes and left. If she’d have stayed a minute longer, she would’ve jumped on top of the bar and begged him to take her.

Owen was the flip side of his brother. He was friendly enough, but he let his younger brother take the attention he craved, often becoming the target of his brother’s jokes. He acted like it bothered him, but he’d told her once in confidence that he really didn’t mind.

Owen was the solid one of the two. If there was a problem, he’d stepped back and think through the solution step by logical step. Ryce, on the other hand, would jump in with both feet, then figure out where to go from there.

She hadn’t had time alone with Owen yet. Instead, they’d shared brief conversations where they’d talked about their lives. She’d done most of the asking. To give him too much information could’ve been dangerous. But every time she talked to him, she got a firmer grasp on the type of man he was, confident, easy in his own skin, and ready to help wherever he could. He reminded her of the perfect hero type she’d loved in her favorite romantic movies.

She liked the Killian brothers. A lot. But on top of that, she was more sexually attracted to them than she’d ever been to anyone in her life. Both at the same time.

Her body instinctively reacted to them, something that had never happened to her. They were amazing, sexy men, but she’d seen her fair share of hot men. No, it was something else, something that made them stand out from the rest. Something that made her think that maybe, just maybe, she’d met two men who could make her life as exciting, yet as safe, as she’d always dreamed it could be.

Her dreams. That had to be it. Obviously, she’d done far too much fantasizing about finding two men who would dominate her and bend her to their wishes. She would’ve liked to have blamed working at the club for her dreams of her own personal Doms, but she’d fantasized about dominating men for several years. Well before she’d even heard the word Dom. But they were only dreams, and letting her fantasies bleed into her real life was not only futile, but possibly dangerous with a secret to keep.

Naked in front of a crowd. How was this different than what her sister had done? And yet it was completely different. Her sister had been an unknowing victim, without having a chance to give her consent to be watched and videotaped.

Leaving her, Ryce moved to a box that was at the side of the platform. She’d seen many of the members get different sexual tools and toys out of the box. He selected a pair of fur-lined handcuffs, then walked toward her.

She held her breath, trying to steady her jittery nerves, then let out a sigh when he passed her to go to Danni. But was her sigh one of relief? Or of disappointment?

“Are you ready, darlin’?” Owen turned his back on his brother and Danni, then found the hook at the neck of the halter top. His hands paused, along with her breath, but he didn’t undo it. “Are you ready to become a real submissive?”

Saying no wasn’t an option. Not only because she had to stay on at the club to take more pictures, but because she didn’t want to say no. The realization hit her harder than she’d have thought possible, but wasn’t that the way of truth? Sometimes it just snuck up on a person and whacked them in the head.

She’d yearned to know Ryce and Owen, and now was her chance. Was she going to blow it because of fear? Or would something more come out of her time there?

Was that it? Wasn’t that the real reason she was going along? Could she have a relationship with them? More than what they were offering her? Or, if she gave into her desires, would she find that she liked being a submissive? Their submissive?

She was letting her dreams enter where they had no right to be. For years, she’d kept them locked away in the recesses of the night to be brought out only while she was alone in her bed. They were better left in the dark.

But what about her other dreams? The ones that included a man, maybe even more than one man, men who would love her, care for her and keep her safe? Was that even a remote possibility? No, she couldn’t give into her secret desires. Even if Owen and Ryce could come to care for her, they’d find out, sooner or later, about the column and the photos and they’d end up hating her for it. Never taking a chance with them would hurt less than losing them later.

“Jewel? Are you ready?” repeated Owen.

Yet, as though she no longer controlled her own mind, Jewel answered the way she wanted to, ignoring the warning signals. “Yes.” It was all she could do to keep back her pleas to fuck her brains out.

What the hell is happening to me?

Owen undid her halter top and let the straps fall. At first, she was too afraid to move. She’d never been exposed before, had never even liked wearing a bikini. Yet there she was with the lights shining down on her tits. Men and women nodded and let out appreciative murmurs.

He cupped her breasts, lifting them as though they were prizes offered to the crowd. She felt the rise of her blush as it burned her cheeks, but held her head high. Although at first she’d found their stares daunting, all at once, she no longer did. Her embarrassment had shifted, leading her to a kind of pride that had her thrusting her shoulders back to jut her breasts out farther.

“Take your skirt off,” whispered Ryce from his place beside Danni.

Shit. They expected her to get totally naked.

“Are you saying green or red, darlin’?”

Green meant she was good to go. Yellow was cautionary and red meant bringing everything to a total stop. She hovered between green and yellow. What would the members think of her if she stopped? What would Owen and Ryce think of her?

“Hurry up, Jewelly. I feel like everyone’s forgotten about me.” Danni stood to one side, her arms crossed. The girl’s pout grew bigger when neither Owen nor Ryce looked her way.

Had he sighed? As though leaving Danni was the last thing he wanted to do?

He whispered something to the girl who, at first, frowned. But when he whispered to her again, a big grin doused the frown. “Sure, Ryce. Anything for you.” She wiggled her fingers at Jewel, then at the crowd before going down the steps of the stage.

“Wait. Where’s she going?” Having another girl on stage with her had helped her.

“Don’t worry. She’ll be taken care of.” Ryce fingered the waistband of her skirt. “I think I gave you an order to strip. Better get to it.”

She hesitated, once more torn between her craving and her need to stay away, keeping her secret safe.

“Just relax, baby. You can do this. If you really want to.”

Whenever she had a doubt, as soon as either Ryce or Owen said anything, her doubt was washed away. All she wanted to think about was the here and now. She’d had enough of worrying for her sister, enough of acting like she was someone else. If for no other reason, she needed this for herself as a distraction and as a release. Wasn’t that what Paul had told her once? That many of the members and employees used BDSM as a way to relax, getting away from the pressures and responsibilities of their lives? Could the same be true of her, too?

“You can trust us, darlin’. Stop and just listen. If you do, you’ll hear the answer coming from inside you. Listen to your gut and follow it.”

She closed her eyes and did as he’d suggested. 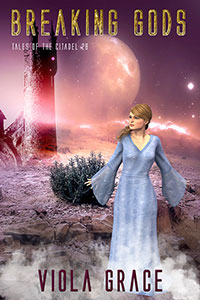