Three people, three different destinies, a common deadline. Will Christmas of 1855 prove to be their downfall or the way forward to a new union and everlasting happiness?

Count Mathew de la Roche feels trapped. To keep La Belle Dame, the sugar plantation in Martinique he inherited at his uncle’s death, he must enter into a stable relationship and provide for a viable heir of his own by Christmas of 1855. Problem is—he likes variety in his bed and doesn’t want to be tied down to a single person.

Amandine Duvalier is the Creole daughter of a slave and a marquis, the master of the now-abandoned Cantrell plantation. Impossible for her to inherit her father’s estate, she’s about to be kicked out of the place where she was born, and she has only until Christmas of 1855 to find new accommodations. Problem is—she’s a certified witch, so no one’s going to offer her a roof over her head.

Kabir Sayed is an Indian prince from one of those obscure reigns tolerated by the British. He stands to inherit the throne, but he’s not sure he wants it. His brother would be better suited for this job, and Kabir has left home to learn more of the world surrounding him. He’s working as an indentured laborer on La Belle Dame, cutting up sugar canes by the hundreds, and he has until Christmas 1855 to make up his mind about the succession. Problem is—Johannes Van Dyke has it in for him, and he might’ve just killed him after a severe beating.

As their paths cross in unexpected ways, the Christmas deadline looms on the horizon. What hasn’t entered the equation so far is the magnetic attraction they feel for one another. Will it be enough to overcome their prejudices and lead them to true union and everlasting happiness? 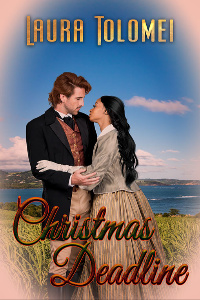 “Welcome, Count de la Roche.” Octave Rimbau rose from his chair to greet the young man entering his office. “Please, take a seat.” He gestured to a leather armchair in front of his desk. “I’m glad you could see me on such short notice.” On sitting down, he studied his guest intently.

The twenty-seven-year-old Count Mathew de la Roche was a fine specimen of a man. Tall and slender, his broad shoulders and chest tapered to a slim waist and long, elegant legs. His large, smoky green eyes shone from a deeply tanned, intensely masculine face. A connoisseur of male beauty, no one better than Octave could appreciate the aquiline nose, high forehead, full lips, square jaw with an adorable cleft in the middle, not to mention the prominent and bushy eyebrows. Thick auburn hair to the shoulder completed the look of a French aristocrat who has settled in the West Indies with a certain degree of success.

“You didn’t leave me much choice,” Mathew teased lightly. “When the baron’s lawyer summons, one must comply.”

“Especially if one’s future is at stake,” Octave agreed in an equally bantering tone.

Mathew gave off the first sign of impatience. “I thought mine was settled.”

Not by a long shot. “Not exactly.” Octave twisted one side of his long mustache of which he was inordinately proud.

“What do you mean?” On the offensive, Mathew threw back his shoulders as though getting ready for a fight. “I thought you called me here to finalize the transfer of all property rights to my name after the six months’ probation that started back in January 1855.”

“Please, don’t get mad. I’ll explain everything.” Soothing the young man might prove difficult, given the complexities involved. “As you know, your uncle, Baron Nestore du Chartreuse, left a very complicated will when he died last year.”

A pause was in order if only to quell the furious throbbing of his heart. The baron hadn’t been an ordinary client. Nestore had been his lover. Not something they could’ve disclosed to their families back in 1820, it was the reason neither of them had ever married.

The reason this damn will is such a torment. Octave sighed.

Being Nestore’s lawyer had proved worthwhile in many ways. Not in all, alas.

Suppressing the memories rushing to the fore, he composed his face in the impenetrable mask he always wore whenever dealing with his dead lover’s relatives. “La Belle Dame, his sugar plantation situated here in Martinique—in Cul de Sac Marine to be precise—has always been your uncle’s pride and joy.” Not to mention the most convenient place where we could be ourselves.

When in 1821, Nestore had suggested investing part of his immense capital on a rundown plantation in the remotest part of the world, Octave had thought he’d taken leave of his senses. Or maybe Napoleon’s death in May of that year had something to do with it, given how much Nestore had admired the man. Either way, it had seemed an absurdity until Nestore had pointed out its undoubted advantages. For one thing, the price had never been lower due to the British occupation and the neglect that followed. The prospect of significant profits was another sure bet given the increased demand for sugar following the end of Napoleon’s wars and their disastrous repercussions on international trade. The abundance of cheap labor was an added bonus thanks to the restoration of slavery after the brutal repressions of the abolitionist movement the damnable French Revolution had stirred up in the West Indies.

These were all excuses, of course.

What had attracted Nestore and convinced Octave was the freedom such a faraway place would guarantee to their relationship. In the end, it hadn’t taken them long to decide to uproot their comfortable Parisian life and move to the Caribbean Sea. The island had been the perfect hiding place for illicit affairs between masters and slaves, so why shouldn’t it also conceal two men’s lustful passion?

“That’s why he wanted to be sure his heir would cherish and make it prosper it as he would have.” Octave ruffled the papers on his desk, pretending to glance at what he’d long ago memorized. “That’s why he didn’t nominate one heir alone but left a list of possible successors chosen from his nephews.”

Even more than a collection of names, it had been a ranking.

Octave still remembered how Nestore had come up with his pecking order. His sisters’ sons had been his first choices. “Because I’m sure they’re my flesh and blood,” had been his lover’s justification. He’d gone on to explain how Julius Caesar considered his sisters’ sons as the only ones who shared his heritage, something he couldn’t be sure of, not even if the offspring came from his wife. The mother was always certain while the father, eh bien, who could say?

Nestore had used this simple truth as his excuse for not wanting a progeny of his own, which was a far cry better than revealing his utter distaste for anything feminine.

Watching Mathew de la Roche’s guarded expression, he remembered the young man had been only the third choice. “I followed the terms of the will scrupulously and gave La Belle Dame to your cousin, Marquis Gasparde du Fauvre.” Octave adjusted the pince-nez on his nose. “He didn’t bother to come visit the property. It wasn’t required, but in not doing so, he allowed production to plummet.” He pursed his lips in disapproval. La Belle Dame had been his home, after all, and he still felt firmly attached to it. “Since the first requirement to inherit the baron’s property is to show a constant increase in production, I had no choice except to assign ownership to the next heir on the list, your cousin Count Barnabe du Croyande—”