Harper’s father has issued her an ultimatum—quit working herself to death and have fun, or he’ll oust her as CEO of their company. She thinks hiring Doug to be her assistant and play her boyfriend is the answer to all her problems, until she finds out about his secret.

Deep in debt from medical bills, Doug’s parents are losing their home. Going to work for Harper is the answer to Doug’s prayers. Yes, it means pretending to be Harper’s boyfriend. That’s a small price to pay. Unfortunately, it also means he has to say good-bye to Tate, his boyfriend and the man he loves.

Tate doesn’t hate Harper when he finds out why Doug went to work for her—and broke up with him. Can he gain Harper’s trust and convince her Doug had good intentions…and that Doug’s contractual obligation can easily become a two-hunk deal?

Heat Rating: Sextreme
Word Count: 64,361
51 Ratings (4.3)
Contemporary Menage a Trois/Quatre
In Bookshelf
In Cart
In Wish List
Available formats
Mobi
HTML
PDF
ePub
Cover Art by Jinger Heaston
Reviews
Amazingly written and I love how real the characters were.
PoetLove726
This one a bit of everything I love in the books I read. There was some guy love, a dash of domination, a splash of spanking, mix-up menage, and a hard to believe happily ever after. And to top it all off it takes part in a part of Florida I'm familiar with. It was fun to read a place or road mentioned and be able to picture it immediately.

After dinner they made her wait until they’d cleaned everything up and the dishes were done and put away. Then Doug reached over and gave her a gentle slap on the ass. “Upstairs, young lady,” he teased. “March.”

She wondered for all of a second if scrambling full speed for the stairs counted as marching. Harper was already naked in the middle of the bed by the time the men made it upstairs and to the bedroom doorway.

“Hmm, she sure seems eager, doesn’t she?” Tate asked.

“Yep. She sure does,” Doug replied with a grin.

They advanced on her as they stripped, naked by the time they joined her in bed. She was ready for more than a show from them tonight. She wanted to go to sleep well fucked, and the doctor had cleared her to do it as long as nothing hurt.

Tate lay on his back, rolling her over on top of him. He kissed her, a firm fist in her hair holding her in place as she squirmed against him and tried to play Pin the Pussy with his cock. She was vaguely aware of Doug reaching for something before he returned to kneel behind them.

Then she heard the unmistakable sound of a condom pouch being ripped open. Doug delivered another playful slap to her backside. “Stop squirming. I can’t see what I’m doing.”

She reluctantly fell still as Tate distracted her with his tongue in her mouth. She felt Doug reach between her legs and realized he was rolling a condom onto Tate’s cock.

“Okay, now you can ride the pony, baby,” Doug joked. She felt him position the head of Tate’s cock at the entrance to her pussy. She slid him deep inside her with a happy moan. When she tried to ride him, Doug pressed one hand on the flat of her back. “Hold on, not yet. Just sit there and look pretty.”

Beneath her, Tate chuckled even as they still kissed. She finally lifted her head enough to talk without his tongue in the way. “Hurry up,” she whined.

“I’m hurrying.” She heard another condom pouch open before feeling cool lube drizzling down the seam of her ass.

She relaxed, her head on Tate’s chest, his heartbeat thrumming under her ear. It was finally going to happen. He slowly loosened her with two fingers. Both of them had done a lot of playing with her ass over the past few days. Her body had already learned to respond, her clit throbbing and cunt growing wet anytime they played with her there, knowing it would feel good and soon end with an orgasm one way or another.

Doug withdrew his fingers and grabbed her hips. “Hold on, baby. Tell me to stop if it hurts.” She felt the head of his cock press for entrance and relaxed, enjoying the suddenly full sensation of both their sweet cocks stretching her at the same time. It was a sweet, delicious, momentary burn that soon turned into waves of pleasure as the men slowly began to move inside her.

She rose up a little on her arms, the sudden change in angle allowing both cocks to hit all her sweet spots at the same time.

Tate reached up and gently rolled her nipples between his fingers, adding to the pleasure. “You think you can come like this for us, baby?”

Before the sound of the question even died in the air, she felt the first orgasm swamp her from the way his cock stroked against her clit. She cried out, trying to thrust harder, deeper, but Doug wouldn’t let her.

She came three more times, between Tate’s cock against her clit and hitting her G-spot deep inside, before Doug turned her hips loose. He grabbed her shoulders as he grunted. “Okay, baby. Time for us to let loose.”

She let them take total control, giving up trying to maintain any kind of rhythm as Tate and Doug fucked her. It wasn’t more than a few seconds before she felt both of their cocks grow harder and thicker inside her. Then the men came nearly simultaneously.

As they lay there in a sweaty, sated pile, Harper smiled. “I love both of you,” she whispered.

Doug kissed the back of her neck. “We love you, too, baby. Don’t worry, you’re stuck with us no matter what.”

She looked down into Tate’s smiling blue gaze. He nodded. “No matter what. We love you and you’ll never get rid of us. So put that into your contract.”

Harper laughed. “I might write a clause in there that I have the right to hunt either of you down if you try to leave.”

Doug nipped the back of her neck. “Maybe we’ll write a clause in there that you have to get our names tattooed on your ass.” He sat up and marked out two spaces on her ass cheeks. “There, and there. ‘Property of Doug and Tate.’”

She wiggled her butt at him. “Maybe I need to get you two tattooed.”

Doug carefully withdrew, but rolled her off Tate and onto her back. He grabbed her wrists and pinned them over her head. He liked to do that a lot, she’d noticed.

“Maybe,” he growled, “I’ll make you get a clit hood piercing so when you’re sitting in a meeting you’ll feel it and think of how well-fucked we’re going to keep you for the rest of your life.”

Her breath caught. She knew he was teasing, but the fantasy of it was enough to send another gush of juices into her already-swollen pussy.

“You’d like that, wouldn’t you, baby?” He nipped her below her ear. She was vaguely aware of Tate getting up and doing something, but Doug had her full attention. “We’d take you to the piercing parlor,” he rumbled in her ear, “and put you up on the table. Tell the guy you’re our girl. Tate would hold one of your hands over your head, and I’d hold the other.” He reached down and pinched one of her nipples. “Maybe get these done, too. Have a chain connecting all three to lead you around by at home.”

She whimpered and squirmed, trying to get traction against his thigh to rub her clit, but he wouldn’t let her move.

“Would you like that, baby? To know under your clothes you were wearing our piercings?”

Harper couldn’t respond, her brain totally disengaged by all her available blood flow pooling between her legs and not her ears.

He chuckled as Tate came back. He kept her arms and shoulders pinned to the bed, but shifted his lower body enough so Tate could get between her legs.

Then she heard the unmistakable sound of the Hitachi being switched on. 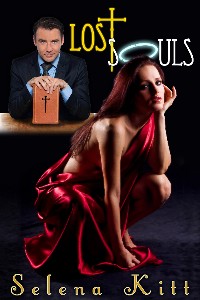