THREE HIRED LOVERS: Jillian Masters, a chemist for Sensual Pleasures, has never had a climax. To save her job, she consents to a week of stimulation. Will she be able to handle discovering her sexuality? And the hired lovers who awaken it?

UNDERCOVER FANTASY: Tiffany North, a hot but jaded vice cop, is assigned to entrap three hunky cowboys at a fantasy resort suspected of prostitution. She’s shocked when her decision-making process is shot to hell by the very men targeted in her sting operation. Can she do what needs to be done?

HIDDEN FANTASY: Stubborn but sexy prosecuting attorney Larissa Viamari is targeted by a violent gang and goes into hiding at a fantasy resort. When she explores her sexual fantasies with two hunky bodyguards, what sacrifices will she need to make, or rather want to make, as she gets to know them better?

Joe tapped the table. “Hop on up and lie on your back.”

Steam built up in the room as Joe unlashed the clamps that held the table together. Once she was fully prone, he separated the two halves, spreading her legs wide. Her heart pounded. Her whole body began to shake as carnal lust filled every cell of her body.

He dragged a velvet cuff around her ankle and attached it to the bottom of the table.

“Do I need that?” She failed to remove the quiver from her voice.

“I don’t want you to fall off, darlin’. Couldn’t live with myself if you got hurt.”

So that was his reasoning. “You’re so thoughtful.” The excitement of what these wonderful men were about to do to her body had her climbing higher, reaching deeper into her soul to explore who she was, what she wanted.

“Just you wait and see how thoughtful I can be.”

Frank took her hands, pulled them over her head, and secured them with another set of cuffs attached to the wall behind her. Being held captive should have made her squirm. Instead, she reveled in her powerlessness.

The warm water gently fell on her belly, splashed on her tits and down her legs just enough to entice, but not enough to satisfy.

Joe grabbed a handful of liquid soap and started with her belly. He slowly dragged his hands across her abdomen and down the sides. She closed her eyes and inhaled. Frank must have done the same, because his large hands covered her breasts with a cool, thick goo and acted like he’d been told he’d win a trophy if he polished her body the best. The two worked in tandem, but Joe seemed focused on avoiding her fully aroused sex. She ached to be touched but refused to beg.

He stepped closer and nudged her opening. Her eyes sprang open.

She had to wet her lips to speak. “Yes, more than you can know.”

His cock entered no more than one inch before slipping out. “You aren’t quite ready for me.”

Why did they always say that to her? “I am, I am.” She couldn’t get any wetter. She bucked and tried to slide down, but he stopped her. Damn.

His slick index finger dragged down her clit and she almost came.

Rod appeared in her field of vision. He’d removed his shirt, but not his pants. “Sweetheart. Do not come. We need to be first.”

He was talking crazy. Don’t climax. Right. She was on the brink and needed the release, needed someone to put their big cock inside her.

“I think it’s time to release her. Frank?”

The cuffs came off, and she lowered her arms. Rod helped her sit. The water flow stopped. Rod smiled. “I want you to get on your hands and knees.”

She did so. She’d loved it when Rod had come from behind. The angle caused more pressure inside her. Instead of Rod, Joe stepped behind her. Rod stood at her side, touching her nipples, massaging them, acting as if they were some little orbs of precious joy. Legs spread wide, she lifted her butt, expecting Joe to lube her forbidden ring of muscle. Instead, he opened her pussy and nudged in. The sweetness took her breath away.

When Joe thrust into her, her body shot forward, and she nearly toppled until Frank stopped her shoulders. Rod rubbed and pulled, tweaking her nipples, the need in her so great, she was ready to explode. She could tell Rod’s cock was bursting to get out, and she wanted to suck him dry.

“Rod, can I see you?” She let her gaze roam over his tented pants.

“In a minute, sweetheart.”

Joe’s movements took her mind off of Rod’s cock as he stroked in and out, each time going deeper until she was sure he’d pop out the other side.

He tapped her butt. “Roll on your side, darlin’. We’re swapping places.”

Oh, my God. The intensity of the experience took her breath away. She couldn’t wait to try out Frank. As if on a signal, they rotated. Joe would be attending her breasts, Frank at the stern with Rod standing close, watching once again. Why wasn’t he willing to share his body? From his hooded, dark eyes, he wanted her bad.

When on her side, Frank lifted one leg above his shoulder as Joe went behind her and attended to her tits.

“Now, sweetheart.” Even though Rod wore slacks, she reached out and cupped his balls over the wool fabric, rubbing and squeezing. Rod’s eyes rolled upward as if he’d gone to heaven.

“Sweetheart, you are too much for me.” He stepped back and undressed completely. “Care to try that again?”

Finally, she could touch him and fuck him with her mouth. Glorious Rod neared, his dick pulsating in front of her. Frank rubbed her wet clit then drove his sex into her hard. Her mind blanked. His larger-than-life cock stretched her walls to near breaking. In this position, every thrust took her to a new place. She pulled Rod closer and drew him into her mouth. 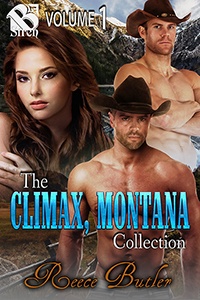