From Sea to Shore (MM)

Two Men on a Dead Man's Chest: Harry has about had it with Thomas, the newest member of the crew. Unfortunately for them, the crew has decided the best way for them to work out their differences is to maroon them for seven days, chained together the whole time.

My Pirate Love: Abraham loves the sea more than anything, but he can't resist the pull of his alluring lover Dale, either, eagerly awaiting each time they reunite. 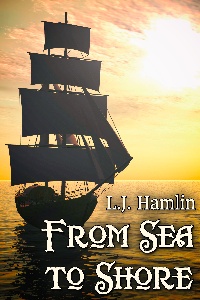 From Sea to Shore (MM)

EXCERPT FROM "Two Men on a Dead Man's Chest"

Harry was drunk, sitting below deck with a few of his shipmates. He’d had a rough day, fighting again with that blasted Abraham. They worked aboard the same pirate ship but were far from friends. From the moment Abraham had joined the crew, he’s been a thorn in Harry’s side. He disagreed with everything Harry said -- hell, Harry was sure he could say the sea was wet and Abraham would swear on the good Lord above that it was dry.

“You’re brooding. The whiskey was meant to help with that,” James, a friend of his, comments, sounding surprisingly sober and pouring another drink for them both like he meant to fix that.

“Think if I throw Abraham overboard the captain will flog me? Might be worth it,” Harry muses drunkenly, taking a deep swallow from his glass and feeling his head swim.

“He’d more than flog you. You know he’s fond of Abraham, has been from the start,” James points out, and that’s another thing that gets under Harry’s skin: that the sainted Abraham can do no wrong in Captain Greyfeet’s eyes.

“Prob ... probably sp ... ppreads hiss legs,” Harry frowns at how garbled his words come out. He hadn’t thought he was that drunk yet.

“Don’t think so. The Captain may be fine with those of your persuasion on board his ship, but I don’t think he swings that way himself. He has a lass waiting in every port.” James laughs.

Harry tries to say you can like maids and fellas both -- and any other gender -- but he can’t get the words out past his numb feeling tongue and lips. He tries to reach for his drink so he can sniff it, fearing he’s been poisoned, but he can hardly see the glass, and he knocks it over instead of grabbing it. The next thing he knows, he’s slumped face forward on the table, strong liquor spilling all over his face and loose black hair.

He hears a chair scrape the floor as it is pulled back. “Sorry, Harry, Captains orders.”

James has poisoned him, he’s sure of it, and as darkness takes hold of him, he curses the ship, the crew, the captain, James, the sea, and mostly Abraham; and hopes to God he haunts the lot of them, especially that rotten bastard Abraham.

Waking up is a surprise. Harry’s head is pounding enough to let him know he is alive but also to make him wish he wasn’t. He doesn’t care to open his eyes yet, and plans to raise his hand to shield them from the sun he can feel on his skin, but when he moves his arm, he feels the familiar tug of a shackle and chain, and his eyes spring open, uncaring of the light that burns them and makes his head throb.

The sight that greets him is so confusing that Harry blinks, certain that he is still drunk. He is on a beach on the shore of some island, there is a fire flickering, on the verge of dying, and a trunk, but the oddest thing of all is the person he’s shackled to -- Abraham, the captain’s favourite sailor. He’s still unconscious, his handsome face more pleasant when relaxed in sleep rather than red in anger. His shaggy blond hair is full of sand, and his lean muscular body is laid out in a tangle of limbs.

Harry will admit privately that he finds Abraham pleasing to the eye, but he’d rather die than let the smug bugger know.

Harry spots a piece of paper pinned to Abraham’s chest just below the open V of his shirt, and Harry refuses to entertain the thought in his head about how that warm patch of skin would feel under his finger. Or how it would taste.

Your fights have begun to interfere with ship life. I will not have my crew taking sides. So you have seven days to either sort out your differences or to leave my ship. There are limited supplies in the trunk, but you will need to hunt and forage for food and water. Learn to work together.

“Damn him!” Harry yells, and Abraham beside him sits up with a jolt.

Abraham looks at Harry with pure confusion on his face. “What on earth?”

Harry hands Abraham the letter from their captain without a word and watches as he reads it. Harry knows he can read -- the captain makes sure any man who is illiterate quickly learns once they’ve come on board. He believes it’s a useful skill they all should have.

“Shit, I knew he was pissed, but I never thought he’d do this.” Abraham puts the letter down, sitting up more and rubbing his hair with his free hand.

“Surprised he’d even punish his golden boy,” Harry says bitterly, spoiling for a fight. He’s stuck on a damned island with his worst enemy chained to him, and he fully intends to blame Abraham entirely because otherwise he’ll have to admit he’s been acting such a fool himself, and it’s his own inability to control his emotions that’s caused him to be left here. With Abraham.

Abraham glares. “The captain is never anything but fair.” Abraham doesn’t sound like he’s too happy about the captain’s idea of fairness.

“I should punch you square in the mouth,” Harry says thoughtfully. He’s angry, but it’s half-hearted, since he knows being here is just as much his fault as Abraham’s.

Abraham looks him right in the eye with his own baby blues. “Go ahead.”

“Don’t want to risk knocking you out and having to drag around your dead weight. Fire will need tending soon.”