Davin is the son of a powerful vampire. A vampire who enslaved werewolves and turned them into the beasts they are feared as.

Davin has never been interested in what his father does, but he never thought he would be kidnapped out of his bed for it either, and by the most handsome man he's ever seen.

He should be afraid, but something pulls him to Triton, and learning of his tragic past makes him sympathize even more.

Triton is an alpha. Not born, but turned by a vampire lord. Davin's father. After years of freedom from the vampires, he's losing control. He needs a vampire, the blood of the male who enslaved him, to drink the bad blood from him and tame the beast.

The sex is a nice bonus as far as either of them are concerned.

The fact that Davin is Triton's mate complicates things, especially when Davin's father goes to war to get him back.

Well, Davin was getting a good hard lesson as to why that was an important rule to live by.

Being grabbed out of his bed in the middle of the night by gloved hands, tied up, and put into a bag before being carried out of his childhood home hadn’t been a pleasant experience.

The gag they had put between his teeth to keep him from biting had hurt like a bitch. Even when the bag came off, and the bright light shone right into his eyeballs, they didn’t take the gag out.

Davin imagined it had something to do with his fangs. Most people didn’t like vampires too much. It was the whole bloodsucking thing. Even though he would never stick his fangs anywhere near someone’s throat or drink their blood without it being thoroughly tested. That was just nasty.

But it didn’t matter to some people. They tended to think their blood was precious. Humans liked to act as though their blood was a hot commodity, that it couldn’t be purchased at every drugstore nowadays.

To be fair, that might have something to do with the fact that the vampire elders still enjoyed biting at a good neck or thigh from time to time. Sometimes feeding a little too much, and the bodies that were found and broadcasted all over late-night news did stir a few things up.

Like the fear people tended to have of things that bit in the night.

“I think so. Fuck, Wilson, grab his other arm and pull it back here. Perfect.”

That hurt so much. It occurred to him that he probably shouldn’t be fighting them so much. Maybe they would go a little easy on him if he didn’t hiss at them, but he couldn’t help it.

He was terrified. And cold. All he had been wearing in bed was the sweat pants he put on after his shower. Now it felt a little as though he were in a damp basement.

Davin kind of hoped it was a basement. At least that was normal. The concrete everywhere and high windows made it feel as though it were a basement, but this could easily be some torture chamber in an abandoned factory for all he knew.

Maybe he shouldn’t be thinking things like that. If he pissed himself in fear in front of these people, that wouldn’t look too good.

Might make his father even more disappointed in him than he already was.

The two men, no, there were three of them, stood in front of the bright light. With it shining behind them and more light in his eyes, it made them look like dark, tall shadows.

No, those were their shoulders. These guys were hairy as fuck. He doubted it was because they just happened to be that hairy. There was no way a bunch of humans could get past the guards.

His father demanded only the best to work in his home.

Which meant these had to be shifters.

Holy God in heaven, Davin had the stupidest luck in the entire world.

He was never going to get his father’s respect after this.

“Look at him! I think he shaking.”

One of the shifters swatted the other on the arm.

The shifter who had been making fun of Davin raised his hands and took a step back, so he sounded as if he was mocking his friend. “Whoa there, I wouldn’t want to offend your delicate sensibilities or anything. Didn’t know we had a vampire lover in the house.”

“Will you both shut the fuck up?” This voice belonged to the tallest of the three men. His tone was much gruffer, grittier, and it was very telling the way the other two did as he told them.

It was all in their body language. That was when Davin knew—this was the guy in charge. This male who stepped up to Davin and put his hands on either side of Davin’s chair. He leaned in, just enough so that Davin could make out the deep brown of his eyes and the little scars that ran across his cheeks and nose.

And something inside him snapped. Davin wasn’t sure what that feeling was, where it came from, or why he had it, but looking into those eyes…

It was obvious that nothing in his life was ever going to be the same after this.

The worst part was how Davin didn’t mind that.

How he kind of wanted it.

He was totally screwed.

Davin could tell by the way he thrust his tongue into Davin’s mouth.

There was something so utterly raw, so frantic, so alpha about it that Davin couldn’t help but melt against Triton’s perfect chest.

Nearly perfect, he should say. The only thing that made it not quite the best chest in the world was the fact that they were still separated by their clothes, and Davin was getting desperate for more skin-to-skin contact.

Anything than just the kissing.

His cock throbbed and his testicles tightened. The only reason why Davin didn’t start dry humping the other man was because he started to use his hands to pull at the too-tight T-shirt Triton wore.

And Triton, the cocky bastard, chuckled against Davin’s mouth.

Davin growled back, playfully biting at his lower lip, if only to remind the man that he had fangs, too.

Triton tensed, but he didn’t stop what they were doing.

No, if anything, he took that gentle biting as a sign of a challenge, and he grabbed Davin around the waist and pulled him up into his arms.

Davin wrapped his legs around the man’s waist, instinct taking over, as well as the fear that he would be dropped.

“What…what are you doing?” Davin wished he didn’t sound so utterly breathless, but he couldn’t help it.

The position seemed a little too…weak. Triton’s strength unnerved him.

Davin was a man. It shouldn’t be so easy for Triton to pick him up and walk around with him as he pleased.

As though Davin weighed nothing at all.

He was no warrior vampire, and he certainly was no alpha wolf, but would it kill Triton to act as though this wasn’t something he did all the time?

Triton fell down on the small sofa with Davin beneath him. His claws came out, too. He didn’t just pull at Davin’s sweat pants—he tore them wide open.

“Hey! Those are the only clothes I’ve got here!”

Triton ignored him, and Davin was angry. The guy had better be planning on giving him more clothes before sending him home.

If he tried sending Davin home with nothing but his birthday suit on, Davin might have to kill him.

Which was something he really didn’t want to have to do.

Again, Triton didn’t say a word to him. It was as though the other man was insisting on being an asshole as he pressed molten hot lava kisses to his chest and stomach.

The instant Triton’s lips brushed around his budding nipple, Davin forgot all about the annoyance of having the only clothing he’d been kidnapped in destroyed. He sank his fingers into the man’s thick hair and gripped it tight, arching his chest forward, desperate for more, thrusting his hips, his cock searching for anything that would give him the friction he needed.

The most he could get was some shallow sensation whenever the head of his dick happened to tease against Triton’s thigh, but the absolute bastard insisted on pulling back, preventing Davin from getting the friction he really needed in order to feel any amount of relief.

Then his large hand slid down and found Davin’s cock, thick fingers wrapping around the shaft, pumping his dick and really making Davin moan.

And then he came. It was so humiliating, and he felt his body on the cusp of that sweet sensation before it hit him. He tried to hold it back. He thought he could because his body did give him the forewarning, but he couldn’t.

Thick spurts shot onto Triton’s chest and stomach, catching him even on the arm as he stroked Davin’s cock. He didn’t stop. He didn’t give Davin shit for it either. The glow in his eyes seemed to get brighter as Davin thrashed beneath him.

As though this pleased him.

Davin hoped it did, because it embarrassed the hell out of him.

He collapsed on the sofa, heart slamming, breathing erratic, but even through the embarrassment, Davin had to admit that he’d never felt better in his entire life.

Then Triton brought his fingers to his mouth, licking away some of the seed that had spilled there.

“Did you…did you really just do that?”

Triton nodded, closing his eyes and moaning softly around his fingers.

When he opened his eyes again, that glow wasn’t quite so bright.

The wolf being pushed back? Or was Triton thinking better of doing something so intimate in front of him?

“That’s what I needed. You getting thirsty yet?”

He still had a craving for something else entirely. One orgasm was not enough. Being stroked while his chest and stomach was kissed and licked wasn’t enough.

There was better than this, there was more, and he was going to get it.

“You still have more work to do.”

Triton lowered his hand. He stared at Davin as though trying to figure something out.

Whatever it was, he seemed to get it fairly quick, because then he nodded. “You’re right.”

Triton grabbed Davin by the hips, turning him around, putting him on his hands and knees. The sofa was small enough that Davin had to grab onto the arm of the couch just to keep any sort of balance as Triton settled up behind him.

Davin moaned, glancing back, wanting to see that proud cock as Triton played with Davin’s hole.

Davin pressed his lips together, but he nodded. “Yeah, once before, and he didn’t talk the same way you did.”

“How do I talk?” Triton said, still teasing Davin’s hole with his fingers.

Triton paused what he was doing, but then he continued on, his fingertips still teasing the muscle of Davin’s hole. “You’ll get used to it.” 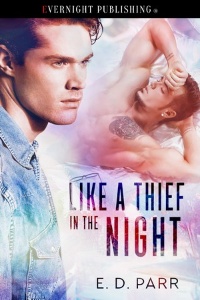