More From The Cat Burglars

In and out, Leah. In the window, into the study, grab the stamp albums and get the fuck out of here.

She forced herself to stand still long enough to catch her breath and steady her inhalations, and then tiptoed to the bathroom door. As her sisters had promised the house was still and silent. The thieving fucktard and his wife were supposed to be in DC for a few days attending some important party or other and from the silence surrounding her Leah hoped like hell her sisters’ information was accurate.

She walked silently out of the bathroom—leaving the door open for a faster exit—and down the hallway to the rear corner of the house where the fucktard’s study was supposed to be. The door was open and she peeked in, but the curtains were closed, the light off, and the room silent.

Much to her relief the entire house felt empty, which was what she was hoping and praying was the truth.

Praying. Oh yes. Her father would insist she pray.

Please God, help me get these stamp albums. You know they don’t belong to the f—Mr. Lutterworth. Thank you. Amen.

Leah looked all around the architraves and door jamb, but saw no signs of an alarm so stepped into the room ready to run if she was wrong. There was no sound so she hurried across to the huge wooden desk. It was piled high with files and papers. She rested her head on the desk making sure only the hood touched the wood, not her actual skin, and sighted up and down each pile looking for the distinctive dark blue fabric of her father’s stamp albums. Not in the three piles she could see from here. Leah moved around the desk to the next side and repeated her actions. Then the third side. Still no.

Fuck! Where else might they be? Leah wanted to start checking the bookcases but she forced herself to look at the piles of papers and files on the final quarter of the table, and there they were, only three or four items from the top of the pile.

Carefully she pulled a mesh bag from her back pocket and lifted the top items from the relevant pile onto the desk chair. She slid her father’s stamp albums into the bag, replaced the files, carefully lining them up with the stack she’d taken the stamp albums from, and checked she hadn’t moved the chair at all.

Leah slid her arms through the straps of the mesh bag, turning it into a sort of backpack, and tiptoed from the room. She hurried down the hallway and into the bathroom, closing the door behind her. Climbing out of the window was more difficult than getting in, because she couldn’t see the fucking drainpipe and had to reach for it with her foot, shove her foot behind it, then slide most of the way out of the window, grip the pipe with one hand and close the window with the other.

Finally she managed it. The back of her sweater was damp with sweat dripping down her spine, and she hoped it wouldn’t hurt the fabric binding of the stamp albums. But at least she had them so it was all good.

Leah slid down the pipe, jumped onto the grass, raced across the backyard as fast as she could, and vaulted up the fence.

In her desire to get the hell out of there she forgot to look over the fence before she jumped, and when she landed on the ground it was to see a big, dark-haired man staring at her.

Leah took to her heels, running with all the speed the adrenaline rush of fear had given her. She wasn’t stupid enough to head back to her car, sprinting left at the end of the street instead of right, and going as fast as she could toward the mall, which was the only place she could think of to lose the man.

She didn’t want to look behind her as she knew that would slow her down, but she thought she could hear him running. He wasn’t stomping or panting or anything that would definitely prove he was there, but the area between her sweaty shoulders itched with the knowledge the man was after her.

She raced around another corner and up ahead of her were two more large men standing, staring at her. Damn! He must have phoned a friend. Two friends.

Leah cut across the road, and bolted toward a side street, but the men moved damn fast and she was starting to tire. She wasn’t a distance runner or a sprinter unfortunately.

And then two strong arms wrapped themselves around her waist tugging her backward, and she would have fallen if not for his tight hold of her.

Desperately she wiggled in his grasp. She was so close to retrieving her father’s stamp albums. There was no way she was letting this man take them from her. The fucktard had already stolen them once.

The big man gripped her arms and turned her to face him. Instantly she slammed her knee with all her strength up and into his family jewels.

He let go of her and dropped to his knees but she was already running back the way she’d come.

Unfortunately she didn’t get far. Another man grabbed her from behind and this time something crashed into her head and the world went black.

“Tell us we can fuck you. Say yes. Admit that you want our cocks deep inside your body.” The third man’s cock was pressing against her hot butt, the cockhead damp with pre-cum.

A million thoughts raced through Leah’s brain. A life-time of being the oldest, the wisest one, the one who set her younger sisters a good example, the perfectly behaved preacher’s daughter, swamped her mind. Her nipples ached for more. Her cunt longed to be filled with a thick cock. Her body craved being possessed by a man. Or all three of them.

To say yes would be insane, wild, stupid. She knew nothing about these men. She didn’t even know where she was, far less how to get home. They’d already locked her in the trunk of a car and whipped her.

But I escaped from the car and I enjoyed being whipped.

She opened her mouth to say No, calmly and firmly. Instead, “Yes, please,” came out.

“You won’t regret it. I promise you excellent orgasms,” whispered the man behind her. He pulled her up onto her hands and knees, and kneeled behind her gripping her hips. The man whose cock she was sucking wiggled around until his cock was under her mouth again, and then he held her head, focusing her mind where it needed to be to suck his balls. Next she rolled them very gently in her hand as she balanced on her other hand and moved her mouth down over his cock.

The third man slid under her body and sucked a breast into his mouth. The pleasure was so intense her hand couldn’t hold her up and she dropped to her forearms using only her mouth on the cock she was sucking for a moment.

She sucked the cock deep and as she did, the man behind her slammed his erection into her cunt from behind, gripping her hips fiercely as he rammed his cock deep in a single movement. He was much bigger than anyone she’d ever had before and her gasp of breath had her inhaling the first man’s cock deep down her throat. She groaned and gagged on it, but he held her ears tightly, grunting, “Swallow me,” to her. So she did, managing to inhale through her nose and fill her lungs somewhat.

Meanwhile the man behind her slammed in and out of her cunt, pumping fast and hard, stretching and filling her on every stroke.

Underneath her the third man licked and sucked her breasts and her nipples, painting wet lines on the soft undersides of her globes and nibbling gently on her nipples. Leah had almost forgotten the pins gripped to her labia, until he started clipping and unclipping them.

When he nipped the one on her clit she cried out around the cock in her mouth, and genuinely couldn’t breathe for a few seconds.

Lean’s body went limp, sprawled over two of the men, with the one behind her leaning over her back. But the one underneath her, pushed her onto her side, held her breasts together tightly and pumped his cock between them. Her eyes flew open in surprise as his hot shaft slid between her breasts. No one had ever done that with her before and it was amazingly sexy. 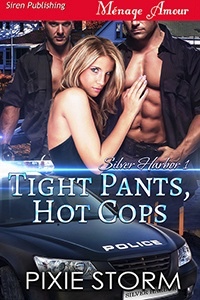