Love Among the Stars (MM)

Love Among the Stars contains three M/M science fiction romances that are out of this world! Contains the stories:

Miracles in Space by Kris T. Bethke: On a space station far from their homes, Terran Brody Phillips and Ssarften Sol Sousou share an evening together that turns into more when Sol discovers he’s pregnant. Brody will do anything he has to in order to keep Sol and his children with him. Can he convince Sol they are meant to be together?

Renegades from the Time War by Gordon Phillips: Carl Obermeier, a cadet at the Time Corps Academy, is on Conditional status due to emotional tendencies. Ordered to study and mediate to train himself out of this, he sees and falls in love with Armand, one the Time Pirates, enemies of the Ordered Society that the Corps serve. Kidnapped by the pirates, he and Armand fall in love. But both are caught between the two sides of the Time War.

See Ya, Space Cowboy by J.V. Speyer: Genthry escapes his own execution when strangers blow up the prison. He’s almost taken into custody by handsome marshal Dryath, but when the mob closes in, he rescues Dryath and takes him hostage instead. Now they’re both on the run. Can they find their way to safety and happiness, or will these enemies sell each other out first? 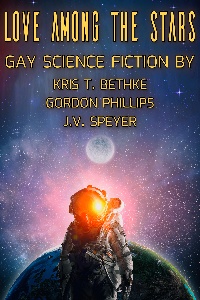 Love Among the Stars (MM)

EXCERPT FROM "Miracles in Space"

The third day we spent mostly sleeping, punctuated by the occasional easy, slow, but no less intense sex. Sol no longer felt like a furnace to touch, and his rosettes had faded back to their barely noticeable state. I knew we were at the end of his cycle, and I told myself not to be disappointed by that. By tomorrow, we’d both be back to reality and at work, which was as it should be.

But I was selfish and I didn’t want to lose him.

I watching him sleep, and didn’t even feel like a creep. I knew his body inside and out now. I knew how he liked to be fucked when in the throes of his cycle, and I knew how he liked it when the “heat” wasn’t gripping him. I knew I could give him pleasure, and he knew how to give it back. There was no doubt we were compatible in bed.

But I wanted to get to know him better outside of sex. As more than just a friend. I wanted to date him.

Except that’s not what we agreed to and I couldn’t tell him.

When he woke, he blinked up at me, then gave me a soft smile. I knew his cycle was over, that he was wholly himself again, so I kissed him quickly and suggested a shower, which we shared. The touches were loving and sweet, but not sexual, and when we were both clean, he helped me change the bed. I almost didn’t want to put the sheets laundry chute. I wanted to keep the evidence of our time together, but I shook my head at my maudlin thoughts and pushed them in.

When I turned around, Sol was dressed. Or at least, he had his shirt and pants on, and his jacket draped over his arm. I put on a brave face and smiled.a

“Three days is not so bad, really. The last time, it lasted for five.”

I didn’t know how to take that, so I tried turning into a joke. “Guess I’m better than your last partner for this.”

Sol rewarded my effort with a smile, though it didn’t quite reach his eyes. He strode forward and kissed me soundly, the first time he’d taken charge. But before I could really get into it, he stepped back, and touched my cheek.

“I thank you, Brody Phillips. You took care of me well.”

“It was my pleasure, and my honor,” I said truthfully. It was on the tip of my tongue to suggest he come to me when the next cycle hit, but it had to be his choice and I didn’t want to pressure him. Instead, I clasped his hand against my face for a moment, and then stepped back. “You have the rest of the day off, as do I. But we’ll see each other tomorrow.”

“We will.” Sol gave me one last look and headed to the door. With a word to Majel, I lifted the security, and a moment later, Sol was gone.

I blew out a shaky breath and sat on the edge of the freshly made bed. Godsdamn, but I didn’t want this to be over. Not just the sex, though that had been amazing. But the rest of it. The closeness. Having Sol in my space. I loved it more than I had words for.