William McCade sits in a wheelchair after almost being shot to death. On that fateful night, he lost his last living relative. While recuperating in his mountain cabin in North Carolina, he’s forced to take in-house nurse Elle Wheeler into his home. Drawn to Elle’s beauty, witty personality, and compassion, Mac struggles with his feelings for her while pursuing his one goal in life—to walk again.

Elle admires Mac’s strength and independence even when sitting in a wheelchair. She’s determined to see him walk again. Being in close quarters, the two soon learn to trust each other and against their better judgment become lovers. But can the relationship last when Mac’s therapy is completed?

When Mac’s would-be killer escapes, Mac immediately goes on the hunt, leaving Elle behind. Can Mac find the killer before he strikes again? Can Mac protect Elle when the killer comes knocking on her door?

Heat Rating: Sextreme
Word Count: 25,293
11 Ratings (4.3)
Contemporary Romantic Suspense
In Bookshelf
In Cart
In Wish List
Available formats
Mobi
HTML
ePub
PDF
Cover Art by Harris Channing
Reviews
A great book
Jlg29
This is the first book that I have read by Ms Hogan and it was absolutely wonderful! I loved the life challenges that the characters face, the emotions, and their intimacy with each other. I also hope to see how the surrounding characters find their happily ever afters just as Mac and Elle found theirs. Ms. Hogan's works are definitely on my must read list now!
Deb
Read more...

Per their routine, Elle followed Cade down the hall and stopped just outside the door to his room. There she waited for Cade to finish his business in the bathroom then get settled into bed. To pass the time she would ask Cade questions about his day, usually about his therapy. Cade would obligingly answer. Little by little, she felt they were getting along better. Elle wasn’t sure that was a good thing. The better she got to know Cade, the more she was attracted to him. That had never happened to her before. She never got involved with her clients. She learned the hard way on that one.

But with Cade it was different. Not only was she physically attracted to those rippling muscles and hypnotic blue eyes, but also by his intelligence and personality, snarls and all. Elle had worked as a nurse long enough to know that Cade was just lashing out at the unfairness of being wheelchair bound. It was obvious he never depended on anyone but himself. So it had to really chafe to be dependent now. Deep down Cade was a strong, hardworking, independent man fighting his way back to his normal self. Elle did not know the details of his injury or the circumstances of how it occurred, but Cade was not letting himself be mired in self-pity, and Elle admired him for it. She would do everything she could to help him. So there she stood waiting outside his door for him to come out of the bathroom and get in bed safe and sound.

“So, how did you meet your friends?” she asked.

“We all went through basic training together at Fort Bragg, then we were a team in Special Forces. After we retired, we started McCade and Associates,” Cade answered, still in the bathroom. “Our main office is in New York, run by another friend, Thomas Jerrico, but we have a satellite office in Charlotte.”

Elle could hear the water running while he brushed his teeth.

“Are you all from around here?”

“No,” he answered, then the toilet flushed and the bathroom door opened.

This was Elle’s favorite part of the day. Cade only wore pajama bottoms to bed, even now when it was late fall. That left his chest bare for Elle’s perusal and admiration.

Cade’s chest was broad and had a light dusting of hair that was slightly darker than the blond hair on his head. Elle now understood the term “pleasure trail” she read about in her romance books. Cade’s started between his two pale nipples, then through honest-to-God six-pack abs, circling an “outy” belly button, and ending somewhere past those pajama bottoms. Elle kept telling herself she only wanted to make sure Cade got safely in his bed, but after the first night she arrived, she couldn’t deny that she also wanted a glimpse of that beautiful body.

Still ogling, Elle realized Cade had stopped and was sitting there looking at her.

“I said Evan and Sam are from here, but Garrett is from Virginia and I was born in New York.”

“Oh,” she mumbled. What else could she say? She had been caught staring, had no excuse, so silence seemed the best option. Cade wheeled his chair back to the bed, but she caught the slight grin on his face.

Mac couldn’t believe it. He actually caught Elle ogling him. He should be offended, especially coming from his nurse, but he wasn’t. Deep down it was a nice stroke to his ego that a sexy woman, albeit an infuriating one, still saw him as a man and not an invalid.

Still grinning, Mac parked the chair by the bed. He placed his hands on the bed and made ready to hoist himself in. Suddenly the chair started rolling back before he was ready to move. Shit! He forgot to lock the brakes. He braced himself for the impact he knew was coming.

Unexpectedly, warm hands caught him by the waist and brought him upright back into his chair. Mac held onto Elle’s arms, face in her hair, as he tried to help her get him situated in the chair.

Instantly he jerked away from her. He placed his hands over his lap, trying to hide his erection. He was hard as a rock just from her smell alone. Elle tried to get him to look at her, but he pushed her hands away.

He turned away from her, embarrassment settling in from needing this tiny, little woman to rescue him.

“I just forgot to lock the brakes. I can handle it from here.”

Before she could continue, Mac said, “Elle, please, just go.”

Knowing he was a proud man, she didn’t want to further embarrass him, so she turned and walked out of the room.

Mac pounded his hand against the wheelchair. Dammit! He hated this fucking thing. The minute he began to feel like a man again he was jerked back to reality. God he hated Elle seeing his weakness. But damn she smelled good. Her hands on his body felt even better. The fact he sustained an erection from just her hands was a miracle.

Mac put the brakes on and hoisted himself into bed. He’d been distracted by Elle’s ogling, flattered actually. No more. No matter how much he was attracted to Elle, he couldn’t let anything get in his way from walking again.

“You can’t possibly be hungry after that Thanksgiving meal,” she said.

Mac stood up straight and looked at Elle over the refrigerator door.

“Well, someone wore me out a while ago, so, yes, I am a little hungry,” he said with a grin.

Elle rolled her eyes and went to the cabinet for a bowl. “Have a seat. I’ll fix us a bowl of ice cream. I don’t want you putting too much pressure on your hip.”

Mac sat down at the table as instructed and watched Elle. A smile came to his face when he realized she was wearing his T-shirt and, if he was correct, nothing else. His dick began to twitch imagining that creamy pussy and those toned legs wrapped around him. Mac stifled a groan as she bent over in the refrigerator looking for the whipped cream. Mac could see just a hint of that sweet ass of hers.

Finally Elle came to the table with a big bowl of ice cream and two spoons. Shaking the whipped cream, she sprayed a line on her finger and tasted it for freshness. Mac sucked in a breath watching that delectable finger in her mouth. His cock was no longer twitching but a full hard-on begging to be the next thing she tasted.

Elle noticed his interest and gave him a mischievous grin. Mac gulped, waiting to see what she would do.

“Would you like a taste?” she said as she sprayed another line of whipped cream on her finger.

Mac was speechless but did manage to nod. Elle stood between his legs and offered her finger to him. Mac kept his eyes on hers as he sucked her finger into his mouth. Slowly she pulled out.

“Hmmm. I wonder if the cream would taste good on something else,” she said.

Slowly Elle sank to her knees. Mac began to pant, anticipation building. Elle shook the can again and slowly sprayed some cream on one of his nipples. It was cold, but when Elle locked on with that hot mouth of hers, fire raced through his body. Sensation after sensation pulsed through Mac as Elle laved his nipple with her tongue. After sucking every last bit of cream from his nipple, Elle moved to the other one, giving it the same attention. Mac never realized his nipples were so sensitive, but he was ready to come, and Elle hadn’t gotten to his dick yet. And Elle was heading for his dick.

Finishing his second nipple, Elle sprayed a line down his stomach until she reached his pajama bottoms. Setting the can on the floor, she reached and pulled his pants past his hips and down to his ankles.

“I never got to see you the first time,” she whispered.

At first, Mac was self-conscious about the scar on his hip, but Elle’s look of reverence then lust quickly dispelled that feeling. She looked like she wanted to devour him. Mac’s hard cock jumped a bit. It was all for that.

Elle placed both hands on the sides of his ass and leaned down to lick off the cream. She started at his breastbone, between his nipples. Lick. Down his midsection to the top of his belly button. Lick. One swipe over his belly button. Lick. Then down his stomach where the cream trail ended. Once she licked all the cream off his body, she then kissed her way down to his scar. She took her time worshipping his body with kisses. Stomach, hips, and thighs. Nothing was left untouched. His whole body was quivering when she looked up at him.

“I don’t think this needs any whipped cream to taste good, do you?” she whispered as she nuzzled his cock with her cheek.

Mac shook his head as he watched Elle take his cock in her mouth. Ecstasy washed over Mac. Nothing was sexier than watching Elle on her knees sucking his cock. It took all his will power not to thrust, to just take what he wanted. But he let Elle run the show. She bobbed up and down on his cock, taking it all the way to back of her throat. She licked. She sucked. She pulled back to the tip, tongued his slit, then slid all the way down again. Mac was going to go insane.

Suddenly he jerked out of Elle’s mouth. Standing, he reached under her arms and lifted her onto the table before she could utter a word of protest. Hands shaking with excitement, Mac yanked his T-shirt off Elle and plunged into her sweet pussy. 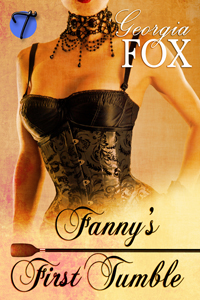