Drew is an omega who's desperate for a second chance. He wants out of the business. Being a temporary mail order mate for random alphas has left him jaded, but with no money and no options, there's little else he can do to earn his living as an omega.

His last alpha hurt him bad, so he's not quite sure he's ready to trust Ryan. A strange, isolated alpha with some problems of his own.

Ryan just wanted to be left alone, but when his new mate is dropped off, a prank from a friend, he figures there's not much left he can lose. Injuries from his former career as a fighter have left him in need of some help around the house, and Drew is a handsome male who calls to all of Ryan's alpha instincts.

The instinct to provide for him, and protect him is strong, especially when Drew's former alpha shows up, looking to cause trouble.

Drew jumped when the door swung open, and an alpha, a tall one who looked like he’d just woke up, dark hair cut short, tired dark eyes with bags beneath them, and a beard shadow definitely appeared.

This was his new mate for the next month.

Drew had worse. He reminded himself of that.

Of the four males who’d purchased him before, one had been older, much older, another had been ugly, and the third had been so good-looking it nearly blinded drew.

The good-looking guy had been the meanest son of a bitch Drew had the misfortune of spending two years of his life with.

The oldest male had taken Drew in as a mate and had bitten him, but never fucked him, really only needing help around the house and with his medication.

The ugly guy had something against showering, and having sex with him had been some of the worst of Drew’s life.

This guy looked somewhere in the middle. Older, but not a senior, maybe forty? He seemed a little messy, and his yard wasn’t in great shape, so it was good that he wouldn’t freak out and hit Drew if he put something down and it wasn’t in the spot where it was meant to go.

He was also kind of good-looking. His nose was a little crooked, but he had a nice expression and nice eyes, and despite the look of his clothes, there was nothing that smelled sour.

Drew could definitely do worse.

Drew flinched. The male hadn’t been rough, exactly, but he was still an alpha and Drew was still getting used to being away from Bernard.

This guy was an alpha? Well, he looked like one, but all the alphas Drew had ever been around talked like they owned absolutely everything around them.

Well, usually they did, including Drew. This guy seemed…a little unsure.

The handler reached into his inside pocket, pulling out his phone. One of the big models. “I’m here to drop off your new mate for a duration of four weeks. Our notes show this was a gift, so you will only need to sign here as proof of drop-off.”

He handed over his phone to the alpha, and Drew’s heart sank.

He was here as a gift? That was the worst.

He might be here for some fun before this guy got married. Some alphas took omegas as temporary mates, fulfilling all kinds of fantasies their real partners would never tolerate.

Ryan was strange for an alpha, but in a good way, and when he got going, he really got going, growling and kissing and nipping at Drew’s lips in a way that made him forget all about the sweet, heartbreaking idea that he could ever be welcome to put his teeth into anyone.

No, as Ryan’s big, rough hands roamed up and down his sides, his waist, and under his shirt, Drew told himself he’d done the right thing.

He was trying to seduce the man, and he did want to stay for longer than a month, but to let Ryan bare his throat like that and invite Drew for a bite was…

Drew couldn’t do it and feel right with himself.

But he could do this and feel all right.

This was what he was here for. He was an omega, and this was an alpha. It was only natural they would want each other, and why not enjoy themselves while they were under the same roof?

Drew suddenly struggled to breathe with the sheer heat that surrounded him.

He pushed against Ryan’s chest, thrilled and kind of shocked that Ryan allowed himself to be pushed back at all.

Which made it easier for Drew to settle between the man’s legs, made him want to do this as he pulled at the button and metal teeth of Ryan’s fly.

“I’ve been thinking about your cock in my mouth for days,” he said.

It was the sweetest thing. Drew had never seen an alpha blush before, and definitely not one Ryan’s age.

He looked right into Ryan’s eyes as he pulled the man’s pants down.

Ryan stared back, lifting his hips, neither breaking that eye contact.

He had absolutely nothing to be embarrassed about. When Drew finally took a look, he saw just how well-endowed the male was.

Even for an alpha, his dick was big.

“Wow. Huh,” Drew said, rubbing the back of his neck as suddenly he was the one feeling a little heat.

“You don’t have to do anything you don’t want to.”

Did he have to be so fucking perfect?

“No, I want to, and I’m pretty good at it. I think, but…you’re bigger than any of the males I’ve ever had.”

Ryan glanced down at himself, then at Drew.

He didn’t get mad, and he didn’t puff himself up with pride either.

“I wouldn’t hurt you. We don’t have to have sex if you’re worried about it hurting.”

Jesus fucking Christ. Was this an act? Was he seriously like this?

“I do, but I was more worried that it wouldn’t all fit into my mouth. I can use my hands and my mouth, though.” Drew was determined that he was going to try before Ryan could come up with something else stupid and sickeningly sweet to say.

Drew was starting to get the feeling that Ryan would decide they wouldn’t have sex altogether if Drew said he wasn’t feeling good about it.

So he leaned in, his tongue darting out and licking at the drop of pre-cum that formed at the head of Ryan’s cock.

Ryan closed his eyes. He was propped up onto his elbows, but his head fell back the instant Drew’s tongue touched him.

Drew got that thrill of power he usually did whenever he did this. He wanted to see just how good he could make his alpha feel.

And, if he was honest, he wanted to reward the male for being so good to him, for asking him things and just being so sweet.

So he slid his tongue from the bottom of Ryan’s cock, slowly, sweetly, tasting every inch of him until he made it all the way to the head, then messily slurped the man’s dick into his mouth.

Ryan threw his head back and moaned.

One of his hands came down into Drew’s hair and held him tightly.

It kind of hurt. Drew must have made a sound because Ryan pulled back suddenly.

Drew made another sound, a displeased one as he reached up and grabbed Ryan’s wrist, pulling his fingers back to Drew’s hair, looking him in the eyes, trying to keep a serious face while his mouth was wide open with the man’s cock in it.

Drew didn’t give a shit. So long as Ryan kept touching him, that was all that mattered.

So he got back to work, sinking down as far as he could go before he was reminded that his gag reflex existed and then back up and down again.

He definitely had to use his hands on the lower part of Ryan’s shaft, stroking the part of his prick where Drew could not reach.

Bernard hadn’t been nearly as big, and Drew had thought the man well-hung, too.

This was a proper challenge, and if he was honest, there was a part of Drew that was stupidly glad to know that this kinder, better alpha had a bigger dick.

This was going to be so much fun. 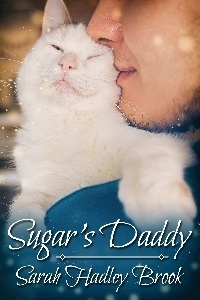