Zania and her familiar, Fluki, are weathering a snowstorm when a bang on the porch alerts them. Upon opening the door, instead of the expected fallen branch, Zania finds a man who is near death.

Aidan wakes in front of a fireplace to find a beautiful young woman tending him.

Zania heals her unexpected guest, her manuwhiri, only for them to be led into the adventure of a lifetime. And to discover a love that spans the universe. 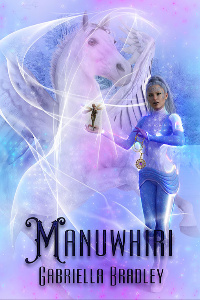 It was still dark when they were rudely awakened by a huge bang. It was so loud, the noise vibrated off the walls and shook the cabin.

Zania jumped up and ran to the window. She gazed out but didn’t see anything except a ton of snow and the dark outline of the forest. “What the heck was that?”

Fluki flew up to the windowsill. “It almost sounded like an explosion. Maybe a tree broke and crashed?”

“We’re not close enough to the forest for a broken tree to make the house vibrate. No, it was something else.”

“Well, we can’t see anything while it’s dark. And you can’t go out there to investigate. Not while that storm is still raging.”

“No. For now, I’ll make us some breakfast.” Zania took the eggs off the table and went to the kitchen. She quickly beat three of the eggs, chopped up some onions and ham, then tossed the mixture into a frying pan and scrambled it.

Fluki had her own very tiny doll size plate, cup, and utensils. Zania dished up a miniscule amount on the little plate, then set it on the table. “There you go. Do you want milk or coffee?”

Zania dipped the thumbnail size cup in her own coffee and set it beside the plate. Fluki sat cross-legged on the table next to Zania’s plate and began eating.

“Yuck, no salt,” she muttered, and using her fork, lifted a few granules of salt off Zania’s plate.

“Sorry, my mind is still on that big bang we heard earlier.”

“It’ll be light soon. Maybe we’ll be able to see something,” Fluki said.

The wind settled, and the howling ceased. Light began to filter through the windows, though it was dim. The snow was still falling, and the heavy gray sky made it seem like dusk.

Zania gazed through the window. “I can’t see a thing. The snow’s too heavy.”

“We’ll have to wait, Zania. Like I told you, it was probably just a big tree that broke and crashed.”

Zania added logs to the smoldering embers. Within a few seconds, the wood ignited, sending warmth into the cabin. “I hate being stuck inside. We haven’t seen a tempest like this in a long time.”

Just as she finished talking, a loud thud sounded just outside the door. “What was that?”

“Snow falling off the roof onto the porch, or maybe a broken branch,” Fluki concluded.

“No.” Zania hurried to the door and opened it a bit. She looked out at the porch. “By the gods, there’s a body in front of our door!”

Opening the door wider, Zania saw the deep tracks in the snowfield leading to her porch. She gazed at the unconscious form of a man, dressed only in a spacesuit. His face was tinged blue from the cold. Was he even breathing? Where had he come from?

Fluki fluttered around her head. “Don’t just stand there. Pull him inside. That’s your manuwhiri.”

“He looks like he’s dead.” Zania summoned her lifting powers and setting her hands beneath the man’s armpits, pulled him into the cabin and toward the fireplace. She rolled him until he lay close to the flickering flames, then felt for a pulse. Though it was faint, she detected a heartbeat. “He’s alive.”

“See, the gods said you would have an unexpected manuwhiri.” Fluki fluttered over the inert form of the man. “He’s a human but not of our world.”

“Tell me something I haven’t noticed already. Now what do I do?”

“Take off his boots. Get him out of his wet clothing, or use your magic to dry him.”

“Fluki, are you crazy? I’m not undressing a man.” Zania waved her hands over him to dry his clothes.

She examined him from head to toe. He had on a tight suit, similar to what space travelers wore. His black hair hung to his shoulders in gentle waves, and he had a nice face. A face that looked uncomfortably grayish right now.

“Blankets.” She quickly fetched them from the couch and from her room and piled them on top of him. “He’ll be fine. He just needs to thaw out,” she told Fluki.

“It’s not as if you’ve never seen a naked man before. You’d better examine his fingers and toes to make sure he’s not got frostbite.”

I’ve never seen one like this... Zania pulled off the man’s boots and socks and examined his feet. They had a gray tint to them, but she didn’t detect frostbite. His fingers looked fine.

“He’ll warm up soon. All we can do is wait now until he wakes.”

“What’s that huge bulge on his arm? Maybe he broke it?” Fluki asked.

“Yes, I wondered about that. I’ll check it later. We’ll watch him closely until he wakes up.” 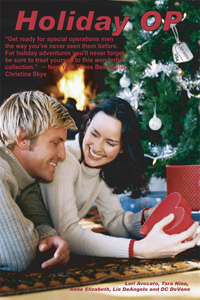