The Town of Casper 7

Meg Simmons is tired of waiting around for Rory, Jordane, Landers, and Motley Tango to notice and love her. But moving on brings danger only they can protect her from.

As she starts a new job, makes new friends, and meets new people, she ignores her gut instincts and focuses on success in order to get her heart and mind off of the four men she really loves. She's thrown into a world that could destroy who she is and make her a victim in no time. She trusts the wrong man, and she suffers the consequences.

When she gets a second chance, trusting the Tango men will be the difference between a future with them, or a life sentence as an object, bartered and paid for through business.

The Town of Casper 7

More From The Town of Casper 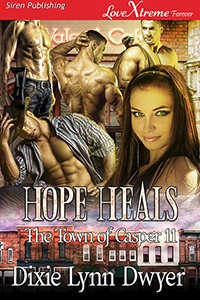 “What do you mean move out of Casper and look for a place in Fayetteville? Your family is here,” Rory asked.

She made a funny face and tilted her head sideways at him.

“I’m seriously considering it. There’s nothing really holding me to Casper, and Fayetteville is about an hour away, so I can visit my family and my friends whenever I want to. Anyway it isn’t written in stone yet, just something I’m tossing around. The job is great and I’ve met great people.”

“Guys?” Rory asked. She held his gaze as she looked up at him. She chuckled.

“No need to be a big brother anymore. In fact, I’ve been doing some training,” she said to him and they all looked her over. This protective, possessive feeling slid over Motley’s body. They were huge compared to her, and her waist was thin and flat, her breasts pushed out like her ass, but otherwise she was feminine and small.

“Training in what and with whom?” Landers asked.

“Grant and Paulie, they’re tired Marines. They’re good friends with Ally, a young woman I used to play with all the time when we would visit my aunt. We’ve stayed friends over the years, and anyway, she’s introduced me to a lot of people and these guys are great instructors. Well, for the most part,” she said and then looked away and as if she was looking to get away from them. What the hell were they doing? Why was he feeling jealous? Were his brothers?

“Are they real instructors or just trying to get you into bed?” Rory asked.

“Really, Rory?” she asked him softly and she looked intimidated. Rory shocked them as he slid his arm around her waist and hauled her close.

“I worry about you. How feminine and sweet you are, and so willing to accept someone’s words, assuming they have good intentions. You know I care.”

“Of course I know you care. You remained right by my side when I was hurt and scared.”

Motley saw Rory’s large palm splayed over most of her lower back and part of her ass. An even greater sense of protectiveness consumed him at the sight. She would be lost in any of their arms, and they could hurt her they were so much bigger. She reached past his shoulder and placed her drink down and then kept her arms at her sides.

“You know that I always keep eyes on you and that I’m here if you need me.”

“You’re a good guy, Rory. You and your brothers make sure that the women of Casper are safe, and that’s appreciated.”

“That’s not what I’m saying,” Rory said firmly and pulled her closer. She didn’t touch him. She kept her arms at her sides submissively, and Christ did the sight do a number on him. One look at his brothers and their dead stares at her and he knew they were feeling the attraction, but this was Meg. This would mean commitment, a whole change of life, a woman to protect and watch over. She was too fucking young.

“What are you saying then?” she asked him.

Rory was breathing through his nostrils as he released her. “I’m a friend too, not just a guy. Remember that, and if you need anything just let me know,” he said and she narrowed her eyes at him, stepped back and looked insulted before she walked away.

“Let’s do this and get her ready,” Rory said. He eased fingers out and Jordane lifted her up, their naked bodies colliding against one another. Her breasts felt oversensitive. He lifted her and held her as if she were light as a feather with a palm to her ass and one to her neck and hair as he plunged his tongue into her mouth. She clung to him, her thighs tight against his, and he lowered her to the bed. He lifted up and caressed her arms, brought them above her head and held her wrists together with one hand. He cupped her breast with the other and palmed her body. “You’re a super model. My God, I will kill any man who ever tries to touch you, to hurt you. You’re mine and my brothers’. You belong to the Tango men, got it?” he asked, teeth clenched as he lowered down and suckled on her tit.

“Oh God, yes. I got it, Jordane, and you’re all mine. The four of you,” she said and that was it. Jordane released her wrists.

“Keep them up there,” Rory ordered as he climbed on the bed, naked, his brown eyes sparkling, his dirty blond hair looking a little wild. He pressed his hand to her wrists and locked them together. She tilted her torso upward as Jordane ran both palms down her body, from breasts to hips. He lowered to his chest and he began to feast on her cunt. She gasped and wiggled.

“Stay still and let go. That pussy is ours now,” Rory said and lowered down to kiss her as he played with her breasts, pinched her nipples while Jordane licked and sucked on her cunt and her asshole.

Rory released her lips and trailed his mouth over each breast. It was overwhelming to have two men, these sexy, older experienced men attack her body, her senses, and make her scream to be fucked.

“Oh my God, yes, yes,” she cried out as Jordane fingered her asshole and rubbed her clit with his thumb.

“What’s going on in here?” She gasped when she heard Landers’ voice and then saw him and Motley enter the room. Both were dressed in black, Motley in SWAT uniform, their guns on their hips, and she came. She moaned and Jordane chuckled.

“Our little virgin has a naughty side. Get undressed but bring the handcuffs. I get the feeling we will be incorporating them into our love making with Meg,” Jordane said and eased down to suck on her clit as he pulled fingers from her asshole.

“Did you say virgin?” Landers asked.

“Yup. She’s going to be all ours, and only ours forever,” Rory said and he eased down to the end of the bed and stroked his cock.

“Jordane, it’s time,” he said and Jordane lifted her up and kissed her, then turned her around and placed her over Rory.

“We picked this up,” Motley said very seriously, and she didn’t see what it was until Rory released her lips and she saw the tube of lube on the bed. She was going to make love to four men. They were going to fill her up with cock and claim her.

“You’ll be fine. You were made for us. Let’s make this official,” Motley said to her.