Olivia Stanton ran from the nightmare and gilded prison that had become her life. She wanted to be anywhere except in the house of a man her mother had taken her to after her father's death. When she overheard the plans and demented thoughts of a crazy man and what he wanted from her, it pushed her to run sooner than she anticipated.

When Jace Hunt and Dane Walsh saw Olivia for the first time after finding her in the forest, they thought she looked more like a doll than a human. Besides the injuries she’d received on her escape, she was perfect. It’s like she’d been living in bubble wrap her whole life.

As they got to know her, she gave them hints about her life before. All they cared about was keeping her safe from the monster that chased her.

Olivia stopped and hid behind a tree, looked over her shoulder, and tried to calm her racing heart. For the moment, she felt she was away from the threat that had taken over her life. But the thought of going back to the gilded prison made her want to run until she was as far from the threat as she could get. She would almost rather be dead than go back.

The only thing she was going to miss was her mother. She would have thought she’d given up on her mother after what she had turned into, but deep down, she couldn't forget the years before their lives changed so dramatically. The family she once had and the happiness she had felt were gone.

When she thought about it, the happy times just seemed so long ago. She was afraid the memories were starting to fade, and that was all she had of her father and the way her mother used to be.

She wiped angrily at the tears that burned her eyes and slipped down her raw, aching cheeks. She couldn’t afford to weaken. Not when she’d come this far.

She’d fought so hard to get where she was at. Sneaking, saving money and food, learning out to unlock doors for her escape. Then she had her mad run to the bus station and from there bought a car and drove without a destination in mind, she just wanted to be as far away from her imprisonment as she could go. She continued on her race because she knew that all her planning and risk would be for nothing if she were caught.

Olivia tried to forget that she was lost in the middle of a forest in a state she’d never been to before or knew anything about. She had no idea what the weather was like or what wild animals were a threat to her. At that moment, she didn’t care. She wanted her freedom at any cost.

When her breathing was close to normal, and the pain in her side had receded, she set off again, going higher up the mountain with every step. She had no idea where she was going or what she would find, but she didn’t care at that moment.

She bit back a scream when she tripped over a hidden branch. The pain that was running through her got worse after each fall. She knew her hands and knees were bleeding, but she couldn’t stop to check or do anything about it. As long as she could and was able, she needed to stay on the move because the alternative was unthinkable.

Jace grimaced, and Dane cursed and grabbed onto the wheel when his truck hit another pothole. “We’ve got to get gravel down on this road.”

“I know. I’ll order it on Monday if the weather holds,” Jace replied.

Dane looked up at the sky. “I’m glad we went to town for supplies today instead of tomorrow as we planned.”

“Yeah, the way the temperature is dropping, this rainstorm could turn into sleet, and then we’re stuck until it dries out.”

Dane grinned over at him. “That doesn’t bother me because then no one will be able to get up to us.”

Jace snorted. They had come back from the military wounded, shattered men. They decided not to re-up because they had already seen and done too much. The innocent people, both women and children, they saw being terrorized and killed, would stay in their minds for the rest of their lives.

They hadn’t known what they were going to do or where they would go when they got back to the States, but they’d been lucky. Jace’s uncle had left him several hundred acres on the mountain. It had one road in and out, and there was the cabin Jace had remembered from his childhood.

It wasn’t much, to begin with, but they didn’t have anything to do but improve the home and survive. Something they were incredibly good at.

If he thought Dane was a bit anti-social, his uncle Henry had been a full-blown hermit.

The cabin they’d found had actually been in great shape considering how old his uncle had been, but it had been too small for two large men, so the first year they built on and up, turning the two-room cabin into a two-story, five-bedroom, three-bath home.

It was larger than they had decided initially, but they still held out hope they would find the woman that would fit them both. They had tried going into traditional relationships, one man and one woman, but had both been miserable and decided they’d rather be alone and together than unhappy. The fact women were hard to come by in the area made the possibility that much worse.

“Jesus, the sky is getting dark,” Dane said. “I think we’re going to get wet before we can get everything into the cabin.”

Jace grinned. “We’ve been wet before.”

“Watch out!” Jace bellowed and braced his hand on the dashboard when Dane slammed on the brakes to keep from running over the woman standing in the middle of the road.

“Fuck, that was too close,” Dane hissed, and they both jumped out of the truck.

Jace held his hand out when she looked around frantically. “Easy, baby. We won’t hurt you.” He cursed in his head when it started misting. The woman was already shaking and looked like she was about ready to collapse.

“Honey, where did you come from?”

The woman looked from Jace to Dane and tried to talk, but her teeth were chattering.

Dane took a step towards her. “Sweetheart, we need to get you inside. We’ve got a storm headed this way, and frankly, I doubt you you’d survive. Let us take care of you until we can get you to a hospital.”

She backed away, she held her hands out as if to ward them off, and her eyes grew wider. “No! No hospital. Please.”

Jace held his hands up. “Alright,” he said to appease her. “We’ll take care of you. We won’t hurt you.” He took a few steps towards her and held out a hand as he would to a frightened animal. “Come on, baby. You’re getting colder by the second, and your lips are already blue.” He breathed a sigh of relief when she set her frozen white hand in his. “That’s good, baby. Let’s get you into the truck and home.”

He made his way down her body, licking and kissing every part he could reach while Dane ravished her mouth and played with her breasts. While Dane plucked and caressed one nipple, Jace sucked on the other, overloading her system with pleasure.

Jace continued to move down. He spread her legs and made room in between them for his shoulders. He used his thumbs to separate her cunt lips to see the little jewel he would use to drive her crazy.

“Jesus, baby, you taste like honey. I could eat you for breakfast, lunch, and dinner.” He grinned when she tightened her grip on the blanket that laid underneath them and moaned.

“Just a little bit more.” He lowered his head and concentrated on her pleasure until she thrashed around, begging, and tears were sliding out the corner of her eyes. He blew on her clit again, then pushed two fingers into her pussy, loving her answering moan. His cock felt impossibly hard, and he couldn’t help but press it against the mattress as he pleasured her to bring himself some relief.

“Is anything we’re doing hurting you?” Dane asked in concern.

“No… yes. You have to make the ache go away,” she murmured.

Jace glanced up at him and mouthed the word condom. Dane handed him one and then concentrated on distracting her by kissing her deeply and pinching and pulling her nipples until they stood out.

Jace rolled on the condom onto his throbbing dick and spread her legs farther apart. He kept touching her clit, thigh, and lower stomach as he moved up into position, with the head of his cock at the entrance to her cunt.

Jace nodded at Dane and started to press in bracing his weight on one of his hands so he could use the other one to thumb her clit to keep her at a high level of need. He stopped and gritted his teeth when he bumped into the barrier of her virginity. He didn’t wait and give her a chance to tighten on his cock. He pushed through until he was in her tight wet cunt and then stopped.

She cried out and reached for them both.

Dane pressed a kiss to her forehead and wiped away the tears that slid from the corners of her eyes. “Shhh, we’ve got you. It’s all over. No more pain ever again.”

She nodded at Dane as he kept talking to her, and Jace stayed still waiting for her to get over the initial pain.

He waited until Olivia lifted her hips to start to thrust inside of her. Riding her slowly at first but steadily forcing his cock to fuck her faster and deeper to bring her the pleasure he knew they could give her that would guarantee she’ll want them again..

“Are you doing okay, baby?” he asked.

“Alright. Tell us if we need to slow down.”

“Okay,” she said and sniffed.

He watched her wrap one of her hands over Dane’s and squeeze. His thrusts got steadily deeper and faster, and he knew he was about at his limit.

Dane chuckled and slid his hand down her stomach and then started to circle her clit with his finger.

“Come for us,” Jace demanded.

He felt her start to tighten on him unbearable and knew she was close.

Her voice rose until a scream burst from her. He continued to fuck her as his own orgasm swept through him, making a groan tear from his throat. He’d never felt this depth of desire or euphoria in his life and knew it was because of the tiny woman he was making love to.

A grunt tore from his mouth as he tried to balance on his elbows. Dane had pulled back to put on his own condom and gave them a chance to bond, which he appreciated.

Jace kissed her over and over. “Are you doing okay, baby?”

She nodded and smiled as she raked her fingers through his hair.

“Do you think you’ll be able to take Dane, baby?” 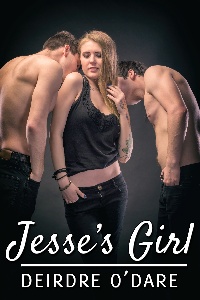