Mari McCabe’s life centers around remote Red Canyon, Arizona and her horse training. Her secondary goal is earning her high school diploma. She is troubled by unanswered questions about who she is and how she came to be living as the ward of half-Indian horseman Berne McCabe.

When a controversial construction project starts nearby, her ordered life is shaken by sudden changes. Horse training may be dangerous work, but danger is relative. She learns some relatives can be dangerous indeed and loyalties may be severely tested. Are her little dog and the construction boss she recently met her only real friends?

As superintendent on his first big construction job, Dusty Layne has to prove his capabilities. A chance meeting with a young woman leads to an unlikely friendship. He’s single, following a painful divorce, but feels the age gap between them is too great to attempt a relationship. Mari seems to have no such doubts.

When those concerns converge with problems at the site and environmental protests, he confronts a major challenge. How can he reconcile these issues while he saves Mari from the grave danger created by her loyalty to him, especially when he’s not sure he can even save her from himself? 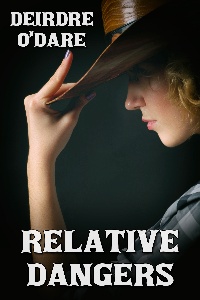 Mari felt Paisley tense as they entered the arena. His ears flickered nervously, but he trotted obediently in a circle, about six feet from the fence. She slacked the reins slightly and nudged him into a slow canter. He surged ahead, taking the proper lead at once. She reined him in a figure eight, which he executed perfectly, although she noticed he was breaking into a sweat much too quickly for the light exercise.

True, the afternoon sun was warm, but not enough to account for his building lather. She sensed the horse was anxious, almost fearful, as if he expected at any moment to be hurt. Just then, seemingly out of nowhere, a dust devil appeared. The whirling wind picked up a couple of tumble weeds and spiraled them skyward, right in front of the horse. He gave a shrill squeal and reared straight up, pawing at the attack he perceived. Mari slacked the reins at once, grabbing a handful of mane and gripping hard with her knees to keep her seat. She slapped the horse across the ears with her right hand. As she hoped, he ducked away from the blow and dropped down, but only for a moment. An instant later he reared again, teetering precariously on his hind legs.

Dusty looked up at the sound of the horse's cry. His heart stopped somewhere high in his throat. Mari clung like a burr to the horse, but what if the animal fell? Could she shake herself free quickly enough to get out of the way? He stood, transfixed and helpless. Moments before he had watched her trot the horse into the arena, admired the easy way they moved in unison. She's good, way too good for this dump. But no matter how good she was, if that damn horse fell ...

"Mari, get clear! Let go and jump free!" He wasn't sure if he yelled or only thought that desperate plea. Time skidded to a stop, the whole world in balance with the frightened horse.

Again, Mari slapped across the horse's ears, kicked him hard in the ribs, and attempted to rein him away from the dust devil, which hung persistently right in front of them. Apparently the habit of obedience took over. He turned, coming down again on all four feet as he did so. Now he might buck, but that would be far preferable to falling. But he didn't, he trotted a few paces before she checked him with the reins. Then he stood, shaking as with a bone-deep chill although sweat streamed off his body in rivulets.

Dusty gulped in a great breath of air, almost giddy with relief but also illogically angry. What right did she have to put him through such a fright? What right had she to be so important to him so soon? He tried to rationalize he simply did not want to witness a horrible accident and have to render first aid or get help, but his fears went far beyond that and deep inside, he knew it.