Heat Rating: Sextreme
Word Count: 55,698
14 Ratings (3.9)
Contemporary Menage a Trois/Quatre Paranormal Vampires/Werewolves
In Bookshelf
In Cart
In Wish List
Available formats
PDF
ePub
Mobi
HTML
Cover Art by Les Byerley
Reviews
A very good follow on book
Jlg29
All that fighting, ugh.
Too much going on around the characters, it would have been best to stick with the one story.
AussieGirl
Read more... 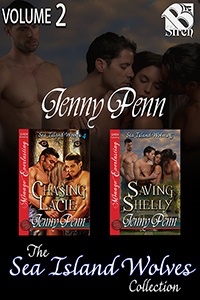 “Do you always argue like that? Always picking and bitching at each other non-stop?”

“Yeah,” Arik finally answered her. “But I don’t know if I’d call that arguing.”

“Arguing requires fists,” Rune assured Shelly, who stared back at him like he’d just said the sky was pink.

“That’s called fighting,” she finally corrected him after a long moment.

“And don’t fists cause pain to whoever you use them on?” Shelly asked with a heavy hint of annoyance.

“Not the way he uses his.” Darby nodded toward Rune before pinning Arik with a pointed look. “But sometimes you get a little carried away, cuz.”

“No. No! And no.” Shelly turned to wag a finger at each and every one of them as she puckered up with the stiff indignation of a school teacher. “There will be no insulting each other. No antagonizing each other. No threatening and definitely no fists.”

“Or what? You going to chunk more paint balls at us?” Rune lifted a brow when his question earned him a dirty look.

“Don’t risk the wrinkles scowling at him,” Darby advised her. “He can’t be changed and he most certainly deserved to be covered in paint. Those balloons were ingenious, by the way. I can’t wait to see what you do next.”

That drew Shelly’s gaze in his brother’s direction. “Are you sure about that?”

“Oh, hell, yeah, but just remember I’m the good one. These are the two you want to aim for.” Darby pointed toward Arik and him as he leaned in close to whisper loudly in Shelly’s ear. “They’re not really domesticated.”

“Now that’s a lie,” Rune instantly objected, ready to smack his brother for trying to ruin his image. “Trust me, honey, I’m so tame I’d let you put a collar on me.”

“Please,” Arik groaned and rolled his eyes. “Women don’t really fall for that cheesy ass come-on, do they?”

“Do they? Are you saying he’s used that line before? On other women?”

“Try all the women,” Arik answered, causing Shelly’s mouth to pucker with the sour look she turned on Rune.

“What?” He held his hands out in confusion. “What works is worth repeating. That is the sign of an intelligent mind.”

“Or an over-indulged one,” Shelly muttered in disgust.

“Well, look who is talking. At least my exes never set fire to a restaurant.”

“What? Ow!” Rune hunched over, his hand dropping to rub the sting out of his leg where Shelly had just kicked him. “That hurt.”

“Then I guess this qualifies as a fight.”

“Now look who is getting all big and puffed up, a little girl who seems to have forgotten she shares her bed with three big bad wolves. You better watch it, little Red, or you might get eaten.”

Rune straightened back up to tower over their mate with a look that would have intimidated most men. Not Shelly. She lifted her chin and stepped right up to Rune and tapped him in the chest.

“Well, maybe you better remember it is my bed and there might only be room for two.”

“Now wait a minute,” Rune interrupted, already seeing the pitfalls of letting Shelly get away with thinking she had that kind of control. “It’s our bed and you’ll be happy to share it with all of us. There’s not going to be any playing favorites or trying to manipulate us with sexual favors.”

“Actually it’s my bed,” Arik interjected in true alpha form. “My bed, my woman. You get yours when I’m willing to share.”

“Excuse me?” Shelly’s jaw dropped so low Rune thought it might hit the ground. “I’m my own woman and I’ll decide what I share with whom.”

Indignation laced Shelly’s words but she couldn’t disguise the faint hint of feminine desire thickening beneath the heavy odor of smoke filling the air. Rune had a feeling it was the idea of being shared that had her pussy dripping. Or maybe it was Arik’s bossiness. Rune had noticed earlier Shelly got hot whenever they got demanding.

“If you can manage to say ‘no’ you have the right to deny us anything,” Rune assured Shelly for giving into the happiness bubbling up within in him and grinning. “That is if you can remember to say ‘no’ between the thanking God and begging for more—ow!”

“You know, we’re just two men sitting naked in a hot tub.” Rune glanced from the glass in his hand to the one in Arik’s. “Drinking champagne.”

Arik scowled as he set his glass down and stood up. “I think I’m going to join Shelly in the shower.”

“Sounds like a plan.” Rune followed Arik to his feet but Arik refused to let him pass.

“You want to arm wrestle for it?” Arik asked, offering up their traditional method of solving disputes. It was also tradition that he won.

“Fine.” Rune gave in with ill grace. “Go on and enjoy the shower. I’ll just sit here and get drunk.”

Arik rolled his eyes but remained silent as he headed off after Shelly. His cousin could pout all night long if he wanted. Hell, somebody had to sleep on the couch and Arik would rather share Shelly’s bed with Darby. The bastard didn’t snore half as loud as Rune. Of course that wouldn’t bother Shelly. She kind of snored a little, too.

Arik wondered how indignant she’d get if he shared that fact with her. He’d save it for later when Darby was around. Something told Arik it would be a lot of fun to ping-pong Shelly between his antagonizing and his cousin’s soothing attitudes. They might even be able to drive her nuts. Arik couldn’t wait until she went wild…this time without the paint balloons. That reminded him that he owed their little mate some payback.

Pausing in the entrance to the shower, Arik watched Shelly turn beneath the fast rush of hot water pouring down from the ceiling. She’d found the waterfall feature and looked even better under it than he’d dared to dream. All wet and slicked down with an endless, glistening stream of water rolling off her plush curves, Shelly looked like a Grecian goddess just waiting to be bent over. The wolf inside him growled its approval at his thoughts but they had a small matter of her punishment to see to first.

With her eyes closed and her face facing into the spray, Shelly must have been dreaming of him because she didn’t even start when Arik stepped up behind her. He settled his hands on her shoulders to hold her still as he snuggled the throbbing length of his erection into the plush softness of her ass, drawing a whimper from Shelly as she shifted away from his hardness.

“I thought we had that conversation earlier. I’m still sore,” Shelly complained with enough bite in her tone to assure Arik she hadn’t forgiven him. Not that he minded. Her resistance was just the right spice to help intensify the moment.

“Ah, don’t worry, babe. That’s not what I had in mind,” Arik assured her as he ran his hands down her arms to capture her wrists. She barely had time to utter his name before he managed to lift her arms up into the cuffs built into the rock wall.

“What the—damnit, Arik!” Panic mended with arousal, thickening her tone into a husky caress that held little bite as she demanded her freedom. “Release me!”

“Soon enough, baby, don’t worry about it. I’m going to take good care of you,” Arik promised her, tracing the delicate line of her spine all the way down to the lush flare of her ass. “But first we got some business to settle.”

Shelly’s demands twisted into a shriek as his palm cracked down over the rounded curve of her rear. Arik watched a beautiful pink flush in the shape of his hand spread out over her pearly skin and couldn’t help but deliver a second smack to her other globe, branding her with a pair of prints as she panted and strained before him.

“I’m your mate. That gives me every right,” Arik retorted just because he knew it would piss her off even more. Sure enough it had Shelly snarling.

“I am so going to get even for this.”

Shelly could bitch and bicker all she wanted, Arik could smell the need dripping from her cunt. It thickened in the air along with the steam in the glass enclosure, assuring Arik she enjoyed the moment as much as him. She was as turned on as him. If she wasn’t then he would have pulled back, but the delicious scent of her pussy unleashed his restraint and he gave into the urge to see her whole ass glowing.

Only once her skin blushed with a beautiful red hue and she panted with her need did he slow up and admire his work. Going to his knees, he soothed away the sting of his slaps with the gentle brush of his lips. Slowly the little whimpers falling from her lips deepened into soft moans as Shelly arched backward in a sensual stretch that invited his attention lower.

Arik nibbled his way down the back curve of her ass, teasing himself with quick, hungry swipes of the cream coating the inside of her soft thigh. He could have dined on her for hours but that wouldn’t be the punishment Shelly deserved. Instead he denied them both and rose back up to his feet to reach for the soap. With slow, deliberate movements he sudded up his hands before setting about meticulously cleaning every inch of Shelly’s body while avoiding touching her with any intimacy.

That didn’t stop her from growing hotter and more desperate. With each stroke of his hands Shelly mewed a little louder, shifting beneath his touch as Arik learned just where she was most sensitive. He recorded every discovery for later use. Right then, he only had one objective.

Howling for Their Mate (MFMM)
Jane Jamison
In Shelf
$4.99
Tweets by
sirenbookstrand