Princess Whimsy Featherstone is shopping for her trousseau when she is kidnapped and sold as a pleasure slave. When she’s given to a stranger as a gift, she has every intention of denying him. However, resisting the sexy stranger is easier said than done.

King Gaedrian has been injected with fate, a drug that induces a pheromone enhancing mating heat. Every woman wants him but only one woman can free him. Whimsy may be that woman, but she comes from a world where giving into their desire will cause her to be an outcast. Can fate bring these two together?

The room was dark. Whimsy stood with her back to the door. The opposing wall was covered in dark burgundy drapes. The only lightning was provided by candles placed at regular intervals around the room. It was warm, so very warm. She frowned at the unusual sensation. It was as though waves of heat rolled over her body.
She stepped forward cautiously, squinting into the darkness. Candles were lit at the far corners of the room, but due to the size of the room, they proved inadequate lighting. She spotted the massive bed with its rumpled sheets trailing the floor almost immediately and looked away.
Whimsy swallowed. She pressed a hand to her belly to quell the funny sensations the heat was causing. The sensation seemed to be increasing. There was also an unusual scent permeating the air. It was rich, thick and somehow disorienting. She felt drowsy and drugged. Whimsy shook her head. What was it? Was it a drug? Is that how he had gotten the two other women to submit without a fight?
She took another hesitant step forward. A sloshing sound drew her attention to the right. In the shadows, almost tucked away in an alcove was a bathing pool. It was large and circular in shape. The water was dark. A large man stood in the middle of the pool. A very large man with a fierce scowl, Whimsy mentally amended.
He soaped his body with slow precise movements. He was spectacularly built, tall and muscular. She’d never seen a man so large before. Yet, he was perfectly proportioned. His skin was a warm honeyed tone and his features were beautiful and sensual. Black hair fell from a center part in a thick wavy curtain to his strong shoulders. His dark eyes finally lifted to hers. They narrowed. His long fingers wrapped around his turgid shaft and a hiss escaped his lips. His eyes never left hers as he pumped his hand up and down his thick length. He was well endowed in this area, Whimsy noted.
The clenching in her belly increased. Whimsy moaned. She turned and fled for the door. She knew it was locked. That wouldn’t stop her from trying to leave. She struggled with the knob, hoping the lock was weaker than it appeared. What she was going to do once she got on the other side, she never found out.
Giant wet hands slammed on either side of her head. She gave a small cry and whirled to face him. She hadn’t heard him move. He towered over her. This close, she could see that his eyes were a deep blue, the color of the night sky. He pressed in closer until her gown clung to his moist skin and then closer still until her back was flush against the door. The feel of his cock against her belly caused more of the curious clenching there. She inserted her hands between their bodies, pushing against his chest. His body was slick and he was strong. She couldn’t budge him an inch.
He did nothing for the moment, merely smelled her neck, his lips hovering over her skin. Whimsy closed her eyes. An uncontrollable trembling seized her limbs. The heat was stronger now, as was the fragrance. It seemed to spread from him, pounding over her in waves. The feelings he was effortlessly evoking in her were more frightening than the physical threat he posed.
“Delicious,” he finally voiced his verdict. His voice was sinfully deep, and thick with emotion. He tipped her chin back and kissed her. The touch was light and undemanding. Whimsy turned her head but he only followed. He tugged on her bottom lip with his teeth before running his tongue over it. With small pressure from his thumb, he opened her mouth for his further perusal.
Whimsy moaned at his taste. Her nipples instantly hardened and her pussy flooded. He slanted his mouth over hers. With the deeper kiss, her blood roared in her ears. She kissed him back helplessly.
He trailed kisses down her neck, homing in on a sensitive spot beneath her ear that had her gasping. “I-I won’t . . .,” she whispered, “allow you to take me . . . oh, don’t do that,” she ended in a shocked gasp as he thrust himself against her.
“Why not? You want me.” 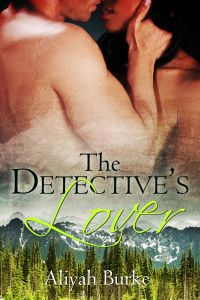