In a world of intriguing magic and mystical skills, the body still ignites with passion and the heart still throbs for love.

Savvina must kidnap her elusive life mate and deliver him to her planet before she is forced into a loveless marriage. She will seduce, entice, and allure, but she must never surrender to his demands or succumb to the demands of her body or the longing of her heart!

Warlord Zephyr will answer the call of her body on his own terms while guarding their backs against a devious enemy, utilizing his unique talents. But he is to find that resistance is an emotion easily slain in the world of love and compromise is the key to her heart. He casts his net, setting his trap—he will kidnap her instead! But to keep her he must battle hard to win the conquest for her hand—for her heart!

“Come closer.” His voice was a low growl.

Delicate shivers raked her body but she stubbornly refused to move or utter a word. Zephyr extended a hand to her. “Have no fear, little one. I mean you no harm.”

She held her place. Zephyr narrowed his eyes. She seemed to take strength in the fact that her face remained concealed beneath her cape. Her voice resonated with strength from the darkness of the hood. “I resent the fact that you have commanded. Should you wish my presence, a request would be sufficient.”

Zephyr watched the petite woman with a surprisingly strong voice. He had been mistaken. Fear did not hold her back. Arrogance did! He smiled. He appreciated the vigor of a chase as much as any man. The challenge would not go unheeded. He stepped forward. “Yet here you are.”

“I have come for answers.”

The corners of Zephyr’s lips tilted upward once again as he inquired, “Answers? You are correct. We have unfinished business.” He reached out and scooped her up in a move too fast for her to anticipate. As her mouth opened on a surprised gasp, he covered it with his own. He swallowed her panic and fed her his own satisfied growl. His arms tightened like steel bands around her while his tongue softly plundered her mouth.

Zephyr groaned as she stopped resisting and became pliant. The feel of her soft body flush against his own hard one ignited a flare of desire deep within him. Her body trembled as he commanded her surrender, demanded it. Nothing mattered except this moment. Nothing existed except this feeling!

He savored the sweet nectar of her mouth. She tasted just as he remembered her, honeycomb and ripe melon. He reveled in the feeling of her petite body pressed against his, her shudders against his own. Although he had to stoop down from his great height to feast upon her lips, there was no hardship. She fit into his arms to perfection. She was young and fresh, fragile and pure. He gentled his hold. He had thought her experienced. He had been yet again mistaken. Her ardor stemmed from her enthusiasm. He sensed her naïveté now. Her actions, erratic and unschooled, required tutorage, nurturing—his!

Zephyr lifted her onto the bed and paused as she stiffened. He caught her frenzied movement, her harried fumbling with her hood, her sigh of relief. He respected her need for anonymity—for now. He leaned over her and rained light kisses upon her darkened face. The skin was smooth and soft beneath his lips. He closed his eyes and feasted upon her. His teeth nipped as his tongue soothed. In his mind’s eye he knew she would be perfection beneath the hood. He could taste it! He inhaled deeply as his lips traveled down the length of her exposed throat. Her scent, sweet and natural, seeped deep within his lungs and stayed.

He sensed her immediate awakening. The feelings he’d experienced the previous night returned in full force. It overcame his senses and demanded fulfillment. His hands, powerless to resist, drove into her hair. Her breasts peaked and pressed desperately against the rough fibers of her cloak. He ached for more than her touch, her taste. He longed to be a part of her. As her hips lifted, demanding the touch she knew he was capable of gifting her, he thrust. The muscles on his back rippled, clenched, and tightened as her hands roamed its expanse in frenzied desperation.

Zephyr rejoiced in the satisfaction that overpowered him. Her sighs and moans beckoned for him, pleaded for him. He pressed the stiff evidence of his arousal deep within the V of her thighs. He swallowed her cries and matched her thrashing. He had to get control of this situation! There was time aplenty when she was with him on his planet—once they embarked on their journey. But he could not ask. He never asked. He simply took!

Carefully, he lifted both her hands to the polished brass headboard. He entwined his fingers with hers as he deepened the kiss. She stretched beneath him and returned the favor. Zephyr held his breath as she plunged her tongue deep within his mouth, exploring and seeking. She was wild and insatiable. He would love every moment satisfying her—but later! Now there were graver matters at hand. He could not allow her to escape once again. The metal slapped around her wrists with a loud snap.

He sensed her panicked, uncomprehending stare within the dark, concealing hood. As her mouth formed a perfect circle, he quickly covered it with his own. He whispered into her mouth. “Do not scream, Cara, my heart. I do not wish to hurt you.”

She thrashed out wildly with her legs. She jerked and yanked upon the binding metal at her wrists until they bled. Zephyr tried frantically to calm her, but she became more hysterical in her pain and panic.

Suddenly her well-secured hood loosened and slid away. Zephyr froze. He sought neither the features of her face nor the color of her eyes. He saw not the alabaster of her creamy skin or the redness of her plump lips. He saw only one thing—the bright streak of silver flashing dangerously down the length of her hair. He sprang away from her in alarm. “You’re a mind-meddler! Witch!”

Savvina stiffened beneath him. Two patches bloomed bright red on her cheeks as she spat out, affronted. “You! You dare condemn me when it is your hands that are drenched in blood? Murderer.”

Zephyr flinched at her sharp tone and harsh words. And then she did something he could never have anticipated. She laughed. She laughed as loud and hard. 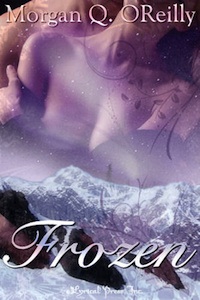 Her Canadian Dream (MF)
May Raymond
In Shelf
$4.99