Brandy’s been hurt in the past by bikers. The gang who’s rolled into town to do construction work in the area adds to her unease, especially when two of the handsome men set their sights on her.

Kyle and West see forever when they look in Brandy’s eyes. They set out to woo her. Will she put aside her fear and give them a chance? She only has a few weeks left to make her decision before they move on to the next job.

When someone uses Brandy as a pawn to stop the construction, Kyle and West must find her before it’s too late. Is it personal or is it business?

For them, it’s very personal.

Heat Rating: Sextreme
Word Count: 37,247
52 Ratings (4.1)
Contemporary Menage a Trois/Quatre
In Bookshelf
In Cart
In Wish List
Available formats
Mobi
HTML
PDF
ePub
Cover Art by Les Byerley
Buy Audio Book at:
Amazon | Audible
Reviews
A great storyline
Jlg29
This was such a good book. Brandy was so sweet and the men Kyle and West where HOT. they feel in love with Brandy almost by the time they first saw her. This book has hot military men/bikers. BRAVO! You've done it again with a really Awesome book Marla I cant wait for the next one in this series.

They pulled in to the Sunset Café a little after nine that night in a cloud of dust. Twelve dusty bike riders looking tired and aggravated climbed off their bikes and began stripping off their helmets. Brandy sighed and prepared for the worst. She was the only waitress left this late at night. They normally closed at ten on Saturday nights. This wouldn’t be one of those nights. She’d be lucky to get out of there by eleven or eleven thirty.

“Hal! We’ve got about twelve bikers coming in. They look hungry,” Brandy called back to the back so that the cook would know what to expect.

“Fuck! I was hoping for an early night.” He stuck his head through the pass-thru window. “You going to be okay out there?”

Actually it had been a long time since she’d had to deal with a bunch of rowdy bikers. In Sunset, Oklahoma, there wasn’t all that much going on. They weren’t on the normal biker’s routes. She shivered and hoped they wouldn’t be rough. She’d had her fill of that and didn’t want to experience it again.

The sound of the bell over the door snapped her back to the present, which she wasn’t sure would be much better than the past. They filed in and began pushing tables together to accommodate their large group.

One of them looked her way when she moved in to take their drink orders. He smiled in a tired sort of way.

“Hope you don’t mind. We’ll put them back when we get finished.”

Brandy was taken aback that he’d been so polite.

“Um, sure. No problem. What can I get all of you to drink? We don’t serve beer here.”

“Hey, everyone. Pipe down. What do you want to drink?” The biker seemed to be the leader. He looked rough and was huge, but he didn’t try and loom over her, and kept a few feet back as if he knew he was making Brandy nervous.

The other men settled down, taking seats and picking up menus from the holders on the tables.

“Got sweet tea?” one of them asked.

“Yep,” she managed to get out.

“Everyone want sweet tea?” he asked, looking around the table.

“Looks like we all want it. Thanks.” He smiled at her and cocked his head. “Brandy is a pretty name.”

“Um, thanks.” She hurried away as they all began looking at the menus.

She rushed to serve up their drinks and take their orders. The man who had told her she had a pretty name introduced himself and the man next to him.

“I’m Kyle, and this is West,” he said. The other man nodded his head with a small smile.

“Nice to meet you.” She finished getting their orders and turned them in to Hal.

“You still okay out there?” he asked.

“Never know what someone is like till you meet them.”

Hal was right, but she had a reason to be wary of bikers. Her past tried to resurface and pull her back, but she refused to dwell on it. She’d thought Hal was a bugbear when she’d first applied for the job there. He’d turned out to be her best friend.

For the next hour, she served their meals, refreshed their tea, and fielded questions from West and Kyle. Why they were so attracted to her, she didn’t know. The other men were polite, but didn’t get friendly. Those two men, on the other hand, got very friendly, asking her all about the town and if she dating anyone.

“Maybe while we’re here, you’ll let us take you for a coffee at that Starbucks I saw when we rode in,” Kyle suggested with a smile. “I promise, we don’t bite.”

West winked at her when he said that. “Much.”

“West.” Kyle seemed to be warning him to behave.

That thought amused Brandy. She smiled despite her plans to keep everything professional. Why would they be staying in town for any length of time? It was none of her business. Nothing about them was her business, and she needed to remember that. She purposefully let another time intrude into her thoughts, and she was able to back away without asking them why they were sticking around.

West couldn’t wait to touch her, taste her. He began unbuttoning her blouse, only slowing down when Kyle touched his shoulder. They both caressed her skin as soon as they uncovered it. West turned her so that her back faced Kyle so that he could unfasten her bra. Then they both began licking and kissing her breasts.

Kyle latched on to one and began sucking while West tongued and sucked on the other one. He unfastened her jeans and pulled away from her breast to help her stand so he could remove her jeans.

Kyle pointed out that they needed to remove her shoes first. He grinned at himself. He was way too nervous. He needed to slow down and think before he did something totally inappropriate this soon in their relationship.

Once the shoes were off, he pulled down her jeans and then removed her socks. He massaged her feet and legs until he had her stretched out on the couch.

“This isn’t going to work. Would you mind if we took you to your bed? I promise we aren’t going to fuck you.” West saw Kyle wince at his words.

He couldn’t help it. He was rough. Kyle was the smooth one.

“It’s down at the end of the hall on the left.”

West breathed a sigh of relief. She hadn’t taken offense at what he had said, after all. Kyle looked relieved as well. He picked her up and carried her to her bedroom and laid her on the queen-size mattress. There was no footboard or headboard to get in the way.

Kyle climbed on the bed and began to love her breasts with kisses and sucks and nips. She moaned and held his head to her.

West smiled and knelt at the foot of the bed and pulled her toward him, so that he could get to her sweet pussy. Her heady aroma went straight to his already hard cock. He leaned in and blew across her wet cunt. Then he sucked in her pussy lips one after the other. He licked them clean of her sweet juices. She tasted of a tangy honey.

Her clit called to him, but he refused to give in right then. Instead he licked up and down her slit, gathering her juices on his tongue. As fast as he licked them up, she made more. He flicked his tongue once over her clit and she bucked beneath him. Using two fingers, he entered Brandy’s cunt and began to slowly push in and out, searching for her hot spot as he moved within her.

When he found it, she bucked again, and whimpered this time. He looked up to see Kyle pinching and nipping at her nipples now. He could tell she was close by the way her cunt was squeezing his fingers. He nodded at Kyle that he was ready.

West leaned in and sucked in her clit as he continued to fuck her with his fingers. He caught her swollen bud between his teeth, and stroked the bundle of nerves with his tongue over and over until she was screaming her climax. He slowly let her down with long, slow licks and easy pumps of his fingers until she moaned. He withdrew his fingers and sucked them into his mouth as she watched.

“You are so beautiful when you come, Brandy. I love watching your eyes cloud over and your mouth open. We could make you come all night and not get tired of it,” Kyle told her. 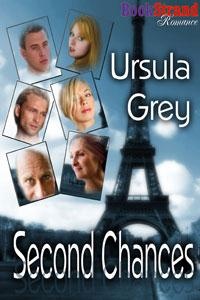