Jolene Saint James outshines debutants and geniuses alike, but you won’t find her dancing at a chic nightclub or sipping champagne on a posh veranda. She’s a long-haul trucker and proficient diesel mechanic.

When it comes to sex, Jolene doesn’t date or flirt—she hooks up and moves on. She’s used men competing for her favor and warns them ahead of time about the firewall and failsafe protecting her heart. But the unthinkable is about to happen.

She meets Jarred McKiernan under the simple pretense of a quick and tawdry hookup. Jarred doesn’t have to fight his way through her defenses—his effortless charm renders them useless.

Jolene finds herself locked in a battle between her own free spirit and the loving angel she’s afraid to become. With the help of some odd but special family and friends, she learns that when a collision can’t be avoided it’s best to control the crash. Behold the amalgamation that becomes a true angel. 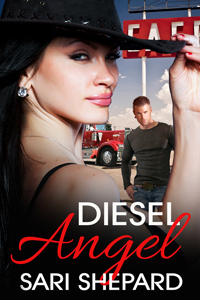 Jarred McKiernan geared down and pulled into the right hand lane as he approached Norbert’s Truck Stop on Route 4 outside of Turner, Maine. He cringed, jake-braking with a thunderous growl as a beat-up jalopy with no side mirror passed on the right. Offering the other driver a blast of the air horn, he pulled his Kenworth T-660 to the far right and slowed to a crawl, then pulled into the lot. Rumbling past the diesel pumps, he rolled into the trucker’s area in the rear of the building. He drove to the back of the lot and brought his rig to a halt, leaving the engine at idle.

After setting his brake and turning off a few electronics, he hopped between the seats and into the sleeper cab. Sitting on the bunk, he opened his laptop and connected to the open wi-fi signal from the truck stop. Once connected, he clicked the Highway Smiles Club icon on his desktop, logged in as Roaminglad, and scrolled to the men seeking women tab. Once on the menu screen, he sighed, seeing no female members had checked in within a twenty-mile radius.

“Okay,” he huffed to himself. “Widen the search area and send a hookup request.” Under time frame, he entered four hours, figuring if anyone answered, he’d still get a short rest in.

Made it in early to Norbert’s on Rte 4, he typed onto the forum. Ladies, if you’re nearby in the next few hours, I’ll be waiting to hear from you.

He clicked merge with mobile phone and minimized the window. Grabbing a bottle of water from the mini-fridge, he sat leaning against the side of the cab. As he tapped a few trip details in his driving log, a burgundy-red Western Star 5700 with a full-size sleeper cab pulled in and rolled to a stop a hundred feet or so to his left. Jarred couldn’t make out the form of the driver in the fading light, but he took a quick check of his app from his mobile phone.

“Probably some old cowboy,” he mumbled, lying back on the bunk. But when his chime sounded, he bounced up like an acrobat and tapped his screen.

A response from Dieselangel asked, New to the club?

Got my card yesterday.

Is that you in the green Kenworth?

That’s me. WTF is that you’re hauling?

That’s one big-ass pump Roaminglad. Go inside and get yourself a shower. Then buy me a burger in the restaurant. I’ll see you inside.

How will I find you?

Dieselangel didn’t answer. Gathering his shower kit and a change of clothes, Jarred turned off the engine and climbed out of the truck. He peered over at the Western Star, hoping for some hint as to the general shape of the driver, but the tint of the glass only reflected the glare of the setting sun. “Well,” he mumbled. “Now she knows what I look like. Let’s see if she bothers.”

He jogged to the side door of the building and waved to the attendant. The middle-aged woman offered a friendly smile and tossed him the shower room key, attached to a five-inch long piece of two by four. Jarred tipped his hat and chugged down the hallway between the store and the restaurant.

For a full minute, he stood with the water spraying his forehead, washing away the fuzz of eight-hundred highway miles rushing under the hood. Washing his hair, he wished he’d taken the time to open his laptop and get a decent look at Dieselangel’s profile picture. He dried off and shaved, anticipating the possible hookup to follow and wondering what excuse he’d make if she looked ghastly.

With his dirty clothes in a plastic supermarket bag, Jarred stepped into the restaurant side of the building and scanned the dining room. A few older couples sat in the booths lining the back wall, but no one stood out. He sighed as he saw the half-full coffee counter. Huffing, he dropped his shoulders and hung his head. But when he turned back toward the door, he jolted and froze.

Jarred heard the shower room key hit the floor, followed by the thud of his liquid soap as he dropped his bag. A squeezing pressure gripped his throat as he listened to himself breathe. Before him stood a tall, sleek, and slender form, gracing the windshield de-icer display so elegantly, he thought for a moment it may be a photo shoot with a high-class model. She stood hands on hips in a sleeveless magenta blouse, short denim skirt and flip flops. Long, full, chestnut-brown hair framed her striking green eyes as she tilted her head and tendered a breathtaking smile. Her skin glowed in a tone two shades deeper than alabaster, gracing thin but capable shoulders and shapely arms adorned with dainty bracelets. Jarred fought not to drop his jaw as she shook her flowing mane, tossing it back.

Her high hips swayed as she took several graceful steps to cover the distance between them. As Jarred gathered the mess, his gaze fell to her long calves and the burgundy polish on her toenails. He stood to face her, still stuffing his clothes into the shopping bag. Her slim but robust lips offered a glossy, knowing grin as she stood face-to-face with him, almost as tall as his six-foot height. Twirling her finger in the tuft of chest hair bristling from his half-buttoned shirt, she purred, “I’m hungry, Roaming Lad.”

“You’re D-Diesel Angel?” he stammered, handing his club card to her.

“Only one D,” she sassed, checking his credentials. Still holding it, she asked, “Mind telling me your card number?”