Monica has fought to keep Haden as her friend. Her girlfriends don’t approve of him. When he sings, it transports her to another world where Monica doesn’t have to think about her impending duties. She keeps him close to her heart and secretly craves to feel his sweet lips on hers.

Haden sings to forget his responsibilities. Whenever he gets together with Monica, his obligations fall away and he feels like a normal man. His band mates constantly remind him she isn’t good for him. Haden is already in an arranged marriage to a woman he’s never met. No matter how much he admits his feelings for Monica, in the end their relationship will only cause both of them heartache.

The time comes for Monica and Haden to follow their destinies. Little do they know, fate has something fiery up her sleeve for these two star crossed lovers. Fortune brings them together one last time. Only then will the depth of their feelings be realized. 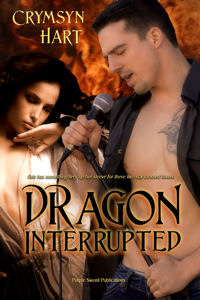 “I missed you too.” Her eyes studied his face. The attraction between them was something he had always ignored in the past. But now, being so close to her, the irresistible pull was something he couldn’t shove aside anymore. Her shirt revealed the shadow between her breasts. Haden stretched up from his seat and pressed his mouth to hers. Monica made a small noise and froze. The taste of the pizza clung to her lips, but her sweetness was all he desired to taste. He slid his fingers along her cheek and slipped them into her hair.

Monica returned the kiss and leaned farther over the couch. Haden needed to feel her pressed against him. To have her scent all over him. He swept his tongue along her top lip and waited to see what she would do. He wished she would let him hold her. Let him draw her into his arms so he could make love to her. But she shied away. Monica pulled in a few breaths. Her face was flushed and her eyes bright from the excitement. He licked his lips, savoring the taste of her along with the spice of the pizza. Her fingers touched her lips.

“I’m sorry. I got carried away. I just really missed you.” She sank into the cushions of the couch. Panic washed over him. Her silence made him wonder what was running through her head. Her deadpan expression remained. He laid his hand on her knee, and Monica glanced at him. Tears lined her lashes.

“Haden…” She shook her head.

He growled and ran his hands through his hair. He launched himself off the couch, realizing he had just ruined the best friendship he had. “Fuck! Fuck! Fuck!” He slammed his fist into the wall. After another hit, his hand punched through the sheetrock.

He tried to strike again, but she held him fast. “I’m sorry.”

Monica pulled his fist to her mouth and kissed his knuckles. A small moan slipped from his lips. Her expression had melted. “Don’t be sorry. It’s not like I haven’t thought about it before. Or dreamt about it.”

“You’ve thought about us?” He cupped her cheek.

“Yeah. More times than you know.”

“What were your thoughts about us?” Haden held his breath, hoping she had coveted the same thing he did.

“Do you remember when we first met?” Monica smiled at him.

He nodded. “Yeah, you were being mauled by the groupies. I pulled you from the horde of people and into the dressing room. You’d gotten elbowed in the face and had a black eye. I stuck my beer bottle on it to ease your pain. We talked for a little bit before the guys barged in and your three friends whisked you away. After that, I couldn’t get you out of my head. Then you were at my next show, and we got to talking. We’ve been friends ever since.”

“Yeah. You came to my rescue. I’ve always appreciated that.” Her hands slid over her face, and she shook her head. Haden needed to know what was going on inside of her head. Is she going to reject me? Her approval of him was all that mattered. Nothing else of what his destiny foretold had prepared him for her. They had always been friends, but there were times he had fantasized about them being together.

“Appreciation? Is friendship all you feel for me?”

Monica bit her lip. She glanced away and then studied her hands. He noticed she wore a silver and amber ring. It glowed in the light and reminded him of dragon fire the longer he stared at it. The flames danced inside of the amber and in his heart for her. It didn’t matter what the others said. She was the one who he wanted to be with. He wanted to taste all of her and touch her soft skin.

“You know it’s not.” Her answer came out in the barest whisper. “But—”