Heat Rating: Sextreme
Word Count: 68,342
10 Ratings (4.3)
Contemporary Menage a Trois/Quatre
In Bookshelf
In Cart
In Wish List
Available formats
HTML
ePub
PDF
Mobi
Cover Art by Les Byerley
Reviews
A great book
Jlg29
Been waiting for this book and it was so good!!! Hot and sexy all the way!
rhondavb
Read more... 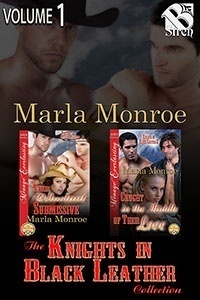 “Come on, Gunner. I’m starved, man. Working on the house is killing me. I’m used to regular meals,” Chester “Scope” Nettles said as he got out of the truck.

“Fuck you, man. You haven’t had regular meals since boot camp. I don’t see you drying up and wasting away there, Chester.” Gunner produced one of his infrequent half smiles.

Scope scowled at him. “Stop it with the fucking Chester. Just because my mom calls me that doesn’t mean you or anyone else can.”

He led the way into Rizzoli’s, purposefully letting the door close behind him, leaving Gunner outside. The other man didn’t bat an eyelash. He opened the door and walked in right behind him. His normal unreadable expression had a little something different about it. That worried Chester. Payback was a bitch, and he was usually on the other end of Gunner’s payback. He sighed.

Looking around, he noticed that the place had been through a nice update. Everything looked freshly painted and the tables were new since he’d been there nearly eleven years ago. As he waited in line to order, he caught a glimpse of someone familiar to him, yet different. Was that Darla Sanchez all grown up?

Damn, she looks fucking amazing! I can’t believe how good she looks. I sure hope she’s still as sweet as she used to be. I really missed that about her while I was gone.

“Hey, meathead. Are you going to order or not?” Gunner asked, punching him in the arm.

“Ow. Yeah.” He looked up to smile at Taylor Rizzoli. He hadn’t seen her in years either. “Hi, Taylor. How are you doing?”

“Ches? Is that you? Wow, welcome home,” she said with a huge smile. “How long have you been back?”

“It’s Scope now, and I’ve been back for about a week. How are you doing? What about your parents, the twins?” he asked.

“Mom and Dad retired to Florida. Rod and Rich are planning to move back from Houston.” She shook her head. “It’s really great to have you back. Where’s Darla? You remember Darla, don’t you?”

He watched as she turned and got Darla’s attention. “You’ve got to see who’s here!”

Darla walked over with a smile as she dried a plate. When she looked up, her face paled then turned a dark pink. He loved that about her. She always had blushed despite her darker skin. That initial paleness wasn’t normal, though.

“Ches? You’re home. Um, that’s great. How are you doing?” she asked, looking even more flustered than before.

“Doing great. It’s good to see you again, Darla. You look fucking amazing, doll. Here, I want both of you to meet my friend, Gunner Barnes. We were in the same unit, and he’s moving back with me since he doesn’t have any family anywhere.”

Taylor quickly extended her hand. “Great to meet any friend of Ches—uh, Scope’s.”

He slowly took her hand and nodded. “Thank you. It’s my pleasure.”

Taylor nudged Darla who, after sneaking another peek at him, stuck out her hand as well.

“Nice to meet you.” Her smile seemed a little brighter for a second, then she pulled back and, nodding, turned and quickly left.

“What can I get you boys? It’s on the house. We’re so happy you returned safely,” she said.

“Oh, that’s okay. We can buy our—” Scope began before Taylor cut him off.

“Nonsense. We all owe you big time for fighting for us. This one’s on me. Now, what do you want?” she asked again, her eyebrows furrowed together as she waited.

He and Gunner ordered burgers and fries then took a seat at one of the back tables. Gunner hadn’t said another word since they’d sat down. Scope was used to his silence, but this time, he wanted to talk out his thoughts.

“I haven’t seen Darla in eleven years. She’s about three years younger than I am, but she’s one of the nicest people you’ll ever meet. Man, she’s fucking beautiful.”

Gunner arranged his silverware before looking up. “I remember you talking about her a lot at first. You didn’t talk much about anyone after a few years. Wasn’t sure if you’d gotten a letter that made you stop or if time just deadened the memories.”

“I think time just made everything seem so far away that I didn’t want to think about it as much. Made me homesick, ya’ know?”

Gunner grunted and shook his head. “Not really.”

Scope wanted to kick himself. No matter how long they’d known each other, he could never quite get it through his thick skull that Gunner had no fond memories of anything or anyone in his past. It was something so foreign to him that he was never able to stop from making stupid statements like that.

“Anyway, she’s really something now. I loved how sweet she was back then. I hope she hasn’t changed any.”

“Taylor has a wedding band on, but your Darla doesn’t,” Gunner told him.

“You were checking them out?” Scope grinned at that. Gunner never really gave women much thought outside of fucking them or dominating them.

“They’re friends of yours, so I figured one of us needed to be sure you didn’t step on any toes by accident. You are known for jumping before you look.”

Scope frowned at him. “I’m not interested in Taylor. We were good friends in school but that was it.”

“And Darla? Are you interested in her sweet or not?” his friend asked him.

He dropped his mouth open for a second before recovering. How did he feel about her? When she’d been 15 to his 18 it had been mostly a type of adoration on his part, but now she was all grown up and hot as hell. Yeah, he could see himself getting to know her all over again. Three years wasn’t much of an age difference now. Besides, she was most definitely all grown up. You couldn’t miss those curves or how her breasts were a generous handful.

“Yeah. Yeah, I guess I am. If she’s anything like she used to be, and with those curves, I can see getting serious about her fast.” He smiled at his friend. “Interested?”

Gunner started to say something when Darla walked over with their orders. She still had that cute blush going on. He wondered if it was from earlier or if it was new and just for them.

Darla sucked at the edges of the cap then lapped at the new drops forming at the slit. When she took his cockhead into her mouth and hummed around it, Gunner nearly came up off the bed.

Her soft giggle as she licked around the head vibrated down the shaft to settle in his balls. She was going to kill him. He was more sure of that now than he’d ever been. She was a demon in disguise. She had to be in order to affect him like this. He’d had women go down on him before and if not for his own imagination, they would never have made him come. It was all that control he kept on himself, but with one look, one touch, Darla had stripped him of all of it, and he wasn’t sure if that was a good thing or not.

The little minx slowly swallowed him down, groaning when he hit the back of her throat. To his amazement, she swallowed and took him deeper than anyone had even attempted before. She swallowed around him again, sending enough electrical impulses through his balls that he thought he was going to embarrass himself and come before she’d even gotten started.

“That is fucking amazing, babe. It feels too good. I’m not going to last long if you keep that up.” His voice sounded strained even to him.

She slowly came up off him and captured his eyes with her stare before going down on him much more quickly, roaming the stalk with her tongue as she did. The effect was to slam the breath right out of him, leaving him gasping as she twisted her good hand around the base and squeezed. His hips jerked as he lost total control for a second. God, what was she doing to him?

Over and over, Darla sucked him to the back of her throat then took even more of him, constricting her throat with one swallow after another, milking his cock like a fucking Jersey cow.

I’m ruined. No one will ever satisfy me or stimulate me like she does. This is it for me. She’s it for me!

As she sucked his dick as if it was the best thing since sliced bread, her good hand surprised him when it curled loosely around his swollen balls. She gave them a couple of light squeezes, then as she took him to the back of her throat again, Darla raked her nails over the skin of his tight balls, and it was all he could do not to grab her head and pound his hips up into her face.

He had his hands in her hair with his nails digging into her scalp before he realized it. At least he’d managed not to restrict her movement or shove his cock deeper into her hot, wet mouth. God, it felt fucking fantastic what she was doing to him.

With her hand wrapped around the base of his dick, Darla sucked on just the mushroom cap until he thought his eyes would pop out. Pressure began to build in his balls as she slowly moved up and down his stalk again, resting her good hand on his inner thigh as she seemed to invite him to take back control, but he resisted. He didn’t want to hurt her, didn’t want to damage what she’d given him.

“I’m close, Darla, so fucking close,” he told her, warning her in case she didn’t want to swallow him.

Her hand closed around his balls just as she took him down again, and that was all it took to set him off. It felt as if his balls turned inside out and an IED had gone off in his dick. It fucking curled his toes as he loosely held her head against his abdomen to keep from holding her down on his cock.