For the past two months, Tabby’s been dreaming of a luscious man who changes forms every time she closes her eyes. He’s whatever she desires, but only in her dreams. Then one day she hears his voice outside of her dreams.

Only when he reveals his true nature does she understand how much danger she’s truly in. He’s not the angel Tabby thought he was. He’s something far worse: a daemon who feeds off of souls. And her soul is next on the menu. 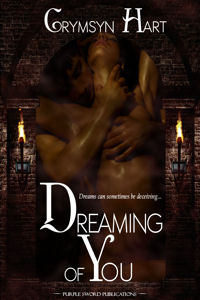 “Can I ask you something?”

I leaned in, kissing him lightly before whispering in his ear. “Tell me your name.”

He breathed in a sharp breath through his teeth and pulled away from me. “I can’t do that, Tabby. Then you would have power over me.”

I placed my hand flat against his chest. It felt like he had a fever. Underneath my palm, his heart beat a slow rhythm, slower than mine. “You already have control over me since I saw your true form. Why not tell me your name, and then I can have control over you?” I slid my finger under the waistband of his pajama pants, circling the elastic. His erection was already visible, peeking through the slit in his pants. I gave him a sly smile and lowered myself to his cock, wrapped my lips around the head and took it into my mouth a few inches.

A garbled moan escaped his lips. I licked his soft skin, enjoying the salty tang to his flesh. I went down on him further, drawing more of his length between my lips, devouring him slowly as my tongue ran up and down his shaft.

“Using your wiles won’t get my name out of me, Tabitha.” His hips surged forward as I let my teeth scrape along his flesh. “I’ve had encounters with angels and demons who—” A groan of pent-up agony rumbled from his chest. I moved in centimeters, taking as much of him as I could and then painstakingly slowly coming back up until I had almost let his cock escape the prison of my lips. Then I repeated everything I had just done. His hips thrust forward again, keeping time to my swirling tongue. His sharp nails cut into my shoulders. I could sense he was ready to come, but right at the last moment I pulled away.

The Lord’s eyes were closed and his breathing was labored. When he opened his eyes they were golden. He smiled and I saw that some of his teeth had become pointed. “Maybe you have a little bit of the devil in you yet.” He ran his thumb over my mouth. I nipped at it, playing the part I knew I had to.

“Will you tell me your name?” This time I pulled up my nightgown and straddled him, letting him feel the warmth of my pussy since I wasn’t wearing anything underneath. I ground against him, wrapping my arms around his neck.

His hands slid under my nightgown, lifting it over my head. It landed in the corner, becoming part of the darkness in the room. Rain still poured outside. The thunder rocked the apartment as his nails scraped the round mounds of my ass. “You may entice me all you wish, Tabitha. But you will not tempt my name from me. Now lay back so I can claim you as I am meant to.” Still holding me, he leaned over and brought me down on the bed, but I rolled out from under him and off the bed. He gave me a devilish smile. “What are you doing? If your intention is to drive me mad, then you are doing it perfectly well.”