It was an inevitable thing, death.

For some it was closer than others. Some never knew it was coming. If it were up to Logan he'd choose to not know. Unfortunately for him he did know.

Death was close and it was coming for him and he accepted his fate.

He was set to die. Logan even embraced it, finally happy to leave this painful world behind. That is until he met Gyre.

Gyre gave him a sense of life once again. He wanted to stay with Gyre as long as possible but as far as Logan was concerned, his time left wasn't enough. 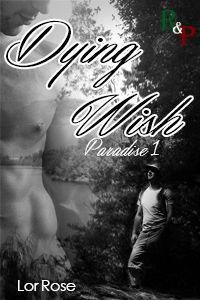 He climbed to the top of Mount Herbert, the tallest peak at 3,020 feet, on Banks Peninsula, Canterbury, New Zealand, alone. This magnificent mountain lay south of Lyttelton Harbour. The harbour itself wasn't something Logan had any interest in seeing; neither was the small township, Diamond Harbour, at its northern foot. He came for the mountain itself.

It had taken him six years, but he was there.

The lush landscape and clear blue water beyond almost brought him peace. Daniel, his lover of four years, had always wanted them to visit together, but it just wasn't in the cards for them.

The painful memory almost brought Logan to his knees. Pushing the memory away, he concentrated on the now. This moment. This place. It was theirs even if they hadn't made it together.

Logan's fingers felt over the necklace Daniel had given him on their first anniversary. It was a simple silver cross, the back engraved with D&L Forever. Their full names were too long for the necklace so Daniel used their first initials instead.

Even back then, with only one year under their belt, they'd known what they had was the forever kind of love. Logan and Daniel wanted to get married, but the politics at the time didn't allow it. By the time gay marriage became legal it was too late.

Being a wildlife photographer, it wasn't unusual for Daniel to vanish. He would often be gone for weeks on a trek to some far off land. He had hated Daniel's job. Logan would stay home and wait in anxious misery until Daniel returned safe and sound. Anytime the phone rang, Logan would flinch, fearing it was some foreigner calling to tell him Daniel was dead or injured. He would've been afraid of all phone calls if he knew what was coming.

It was Daniel's dream to bring Logan to Mount Herbert. Daniel wanted him to know the beauty of a foreign land. To know the peace such beauty could bring.

"By God, Daniel, you were right." Though the peace Daniel described was unachievable. Not with this weight on Logan's soul. He tried to avoid it, the gnawing ache in his chest, the one left by Daniel's death. Logan acted as if everything was all right, and he'd gone about his day-to-day routine till he snapped.

It was a day past the one year anniversary of Daniel's death. The house was dirty, something Logan couldn't stand. He set about cleaning only to come up short. A pair of Daniel's cargo shorts somehow made it into his pile of laundry. The fabric was course and the pockets filled with nonsense notes. A scream ripped free and whatever he had in his hands went flying across the room. His very soul ripped in two. The floor beneath him gave way, relinquishing him to the black depths of his pain. Ever since, Logan hadn't felt a moment of happiness. Everything reminded him of Daniel, and nothing felt complete. But this was the closest thing to peace he felt in six years.

He started saving even before he knew he would make the trip, but his job as a night cashier didn't exactly pay top dollar. In truth, he still couldn't afford to come but, his circumstances being what they were … "It doesn't really matter, does it?" He didn't know who he was talking to. Himself? Daniel? Another gust of wind sent a chill down his spine. The midday sun heated his face, and the lush forest held a scent all its own. "Thank you, Daniel."

Logan stood for another hour, taking in the world Daniel wanted to share with him. Taking another deep breath, he gathered his pack and began the long descent back down the peak. He didn't know why, but he felt as if he was leaving a piece of himself behind.

The walk down would take him longer than most people, just as it had taken him longer to climb up. Logan just wasn't physically capable anymore. He made camp further down the peak the previous night, but he was too tired and drained to make it there that day. He would try anyway. That was all he could do.