A tangled web of love, magic, and seduction, this retelling of the classic fairy tale Rapunzel is not your mama’s fairy tale.

Elle has lived in solitude, high in the tower, her entire life. When Emmett appears on her balcony, poisoned from the vicious Witch Weed and close to death, she knows she must save him at all costs. Her desire for him becomes unbearable, and when she realizes that he has also stolen her heart, she must decide—risk it all to be with him or let him walk away, missing her only chance at true love.

However, Elle's time is short and her life is in danger. Despina, an Enchantress posing as Elle's mother, needs the magic that lives in Elle in order to survive. Can Elle save Emmett, embrace the love that awaits her, and survive her mother’s dark intentions before it is too late?

As Emmett lay on the bed, watching Rapunzelle weave the tale, he found himself struggling with an inner conflict. He knew that magic once ruled the lands. Peppered throughout the history books were tales of powerful wizards and evil witches who had become consumed by their lust for power over all of mankind. They were said to be the cause of the War of the Witches, which had turned into a battle that, ironically, had ended the rule of magic once and for all. Some creatures of magic still existed, of course. Faeries and Ogres were spotted from time to time in darker corners of the woods. A rock troll still lived up in the mountains in a cave hidden by windy paths and thorn bushes. Even the midwives were gifted healers. It was the fact that Emmett’s experience of climbing a poisoned vine could be real, rather than brought on by hallucinations from tainted faerie water, that bothered him.

His thoughts were interrupted by the feeling of Rapunzelle’s hand on his. He looked up to see her eyes fixed on his with intimidating intensity. She lifted his hand from where it had been lying on the bed and turned it so that his palm faced up. When Emmett looked down to see his hand in hers, his heart skipped a beat. The palm of his hand was covered in red, angry wounds that were in the midst of healing. Some of the deeper cuts had thread sewn through them, keeping them closed, while others were slick with what appeared to be a salve of sorts. Seeing the severity of the wounds caused pain to surge through Emmett’s hands, and sweat began to bead on his forehead.

He pulled his eyes from the wounds and found hers still fixed on him.

“You asked me where you are. I do not know why or how you found me, but your memories are not false. You did climb my tower. I found you on the balcony, covered in blood from your wounds and succumbing to the effects of the poison from the Witch Weed that protects me. I brought you inside so that I could heal you, but you’ve been asleep for several days, and I was starting to think that I’d been too late.”

“Why would you attempt to heal me if you have Witch Weed to keep intruders out?”

A sweet smile crossed Rapunzelle’s lips as she reached up and ran her fingers through Emmett’s hair, brushing it back from his forehead.

“Even a pure-hearted man would never survive the climb. He would have succumbed to the poison and fallen to his death not even halfway up. I figured that there must be a reason that you were able to make it all the way to the top, and it is not my place to interfere with your life path. Healing you seemed to be the only true option.”

A whispered “thank you” was all he could manage, but she didn’t seem to mind.

“I’ve made a stew for us, hoping that you would awake soon and be hungry. Let me get you some, and we’ll start working on getting your strength back.”

Emmett watched as Rapunzelle rushed out of the door to the bedroom, her black braid following behind her. He slowly looked around the room, taking it in with newfound awe. The walls were rounded and made from the same alabaster brick he had been drawn to in the meadow. There was no window, but the roof was fashioned to allow sunlight to fill the space. The room was decorated with paintings of flowers and mountain scenes, and books cluttered the tops of furniture. In the corner, only half-hidden behind a sheer curtain, he saw a copper tub big enough to lie in while bathing. Off to the side behind the tub, he could see a door that opened just enough to reveal a room filled with clothing. The bed sat in the center of the room and was large enough that two of him could comfortably fit side by side on it. It was covered in lush, deep-purple blankets and countless pillows that were scented with jasmine and a spice he was unfamiliar with.

If there had been a choice of being healed in a sterile nursemaid’s wing of the palace or high above the ground in Rapunzelle’s bedroom, sealed away from the world below, he would choose her room every time. Sounds of her preparing his meal drifted in through the bedroom door, and Emmett found himself comforted by it. He closed his eyes and listened as he fell asleep.

Emmett reached his hand up to her face, gently tucked the short strands of her rogue hair behind her ear, and traced his fingers down the side of her neck, stopping just above her breast. A tingling sensation shot through her as tiny bumps rose across her flesh and she shivered.

“Why did you get out of bed?” His voice was thick and smooth like honey, and Elle began to feel as if the room was closing in around her.

“I…woke you…but you need your rest…”

“I need a lot of things, Rapunzelle, but right now, rest is not one of them.” His eyes stared deep into her soul, and it made her knees weak.

She watched as Emmett slowly licked his lips. “You.”

It was barely a whisper, but the word echoed through her mind as if he had screamed it at her. Elle didn’t think it possible for a man as beautiful as Emmett to want a woman as plain as her. She wanted to back away, to tell him that she was sure he was still suffering delusions from the poison that lingered, but as he brought his face within an inch of her own, she couldn’t speak, let alone move.

“You are so beautiful…”

Elle felt Emmett lightly drag his finger down her breast, across her nipple, and down to rest on the flat of her stomach.

“Does my touch make you nervous?”

Elle slowly moved her head back and forth. “No.”

He moved his face closer. His lips hovered just above hers as he spoke. “But, what?”

“Yes, you do…I can see it when you look at me. You have longing in your eyes, and I can feel it burn into me, invite me to come to you…You do want me, don’t you?” It was more of a statement than a question, but it didn’t matter. Emmett did not give her a moment to respond. He pressed his lips to hers, gently at first, as he pulled her body against his. His kiss was warm and soft, and she felt him slowly slip his tongue in between her lips and past her teeth. Electricity shot through her body and she responded in kind, finding herself eager to taste him. He filled her mouth as she wrapped her arms up around his neck, feeling her hesitation quickly dissipate as passion overtook her. Arms tight around her waist, Emmett lifted her from the ground, and Elle instinctively wrapped her legs around his torso. The heat from his body radiated through her gown, pressing into her, and Elle lost all reserve. She did not think about how it was wrong to give herself over to a virtual stranger or how painful it would be to have his long, fully erect cock shoved into her tight pussy. All she could think of was how amazing it felt to have her tongue plunged into his mouth, his arms holding her close and his penis at the ready, teasing, rubbing against her.

In one fluid motion, Emmett pushed Elle’s back up against the nearest wall and pulled his mouth from hers. He began to kiss down the side of her neck and his words, thick with desire, danced across her skin. “Can I have you?”

He’d hardly waited for her to answer and Elle felt him pull one of his hands from around her waist and slide down her ass and under the dress that was now so inconveniently in the way. He lifted his mouth from her neck and stared into her eyes as he found her pussy and slowly slipped a finger inside of her. A moan escaped her mouth as Emmett began to pump his finger in and out of her until it was slick with her juices. He brought his wet finger up to Elle’s mouth and traced it along her bottom lip before pushing it into her mouth. Eyes still locked, Elle sucked her juice from his finger. Passion burned in Emmett’s eyes, and he pulled his finger from her mouth and pressed his lips back onto hers. His tongue licked her bottom lip and he pulled it into his mouth as he closed his eyes and leaned his head back. “I have never tasted a woman as sweet as you…” He plunged his finger back into Elle’s hole and pumped harder and faster than he had before as he shifted her away from the wall and back toward the bed. As he laid her on the bed, he pulled his finger from deep inside her pussy, his arm from around her waist, and stood, fully erect, before her.

“Tell me right now if you are not ready, because I can’t promise that I will be able to stop if you change your mind.”

With permission granted, Emmett lifted Elle’s leg and brought her foot to his mouth. He kissed each one of her toes and then moved on to her ankle and up her leg until he was kissing the inside of her thigh. Elle had never experienced half of the sensations that were dancing through her body, and it was all she could do to hold in the scream of ecstasy that threatened to burst free. Emmett’s kisses suddenly changed, and Elle could feel that he was tracing his tongue up the rest of her thigh and over toward her pussy. The anticipation of the unknown was almost more than she could handle, and she held her breath as she waited. She released her breath in a long moan as she felt Emmett’s mouth consume her. He kissed her between the legs more intimately than he had her mouth. His movements were slow at first, his tongue spreading her folds of skin apart as he licked up to her clit. He circled his tongue around the tip of her clit, igniting extreme desire within Elle, and then grabbed her thighs in his hands and forcefully spread her legs wide apart, revealing her dripping pink pussy that anxiously awaited being consumed. 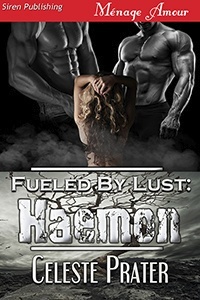