Meeting for lunch at a Chinese restaurant, Jill’s friends are shocked by the improbable, amazing tale of good fortune she spins. Lust, sex, love, pregnancy, and a planned marriage to a strapping young hunk, all from eating a red fortune cookie? A FORTUNE COOKIE? Give me a break!

The owner of the Chinese restaurant sets one of the miracle red fortune cookies in front of each of Jill's friends. Gail, the hi-powered attorney, Rita, the gorgeous model, and Saundra, the uppity socialite, look at each other, then at Chad, Jill’s dreamboat fiancée. What should they do? What would you do?

Fortune Cookie Magic, a 2008 Eppies Finalist, which was subsequently rewritten, originally was published as Fortune Cookies by eXtasy Books

Jill meets her friends, Gail, and Rita and Saundra and others at Eddie Chang's place, because she wants them to sample the fortune cookies that brought her a wonderful lover and the baby she had longed for. The magic in these cookies only works if you are not truly fulfilled in your life and it turns out that most of the girls need a touch of magic in one way or another - but can it work for all of them?

Chapter One - Rita In the back seat of a cab, Rita kept glancing at her watch. “Damn, forty minutes late.” She mumbled to herself.

Riding over, she’d reflected on the crazy story Jill had spun. Magic fortune cookies? Really! Then again she hadn’t completely rejected the story—had she? After all, two red cookies resided in the bottom of her purse. Jill sure lucked out with Chad, but Rita wished she hadn't brought up Randall?” It’s a good thing for Jill, she met him before her. She would have snapped him up in a New York minute. I have so much love to give and I can’t find anyone to give it to. Not since Randall. God, why did she think of Randall? It always made her so sad to think of him. Sometimes she even got mad at Randall for getting killed and leaving her alone. Then she felt guilty for being so selfish.

Tears begin to fall from her eyes as she remembered her deceased fiancé. Here she was, totally depressed, with one of the most important shoots of her life in front of her—the cover of Glamour. Maybe if I ate one of the fortune cookies it would make me think of something else. I can’t screw this up. I’m not getting any younger. I’m already old by fashion model standards. She selected one of the cookies and took a bite. It was good. It wasn’t sweet. It didn’t really taste like anything she could think of. More like a chicken flavored carnival pretzel than a confection.

Suddenly, a whirling wind spread debris and dust all around them. Visibility was so poor the driver had to pull over and then as quick as the mini tornado started, it stopped. A minute later, the cab dropped her off, in front of Cre`mel Studios, a converted warehouse in an industrial area near the East River.

Rita rushed in the building and sprinted upstairs. She burst in prepared to apologize or if need be, beg forgiveness. A man paced back and forth talking on his cell phone. He smiled at Rita. She was speechless, this was the most attractive man she had ever seen. In addition, her nether regions felt warm and fuzzy. She hadn’t been to bed with anyone in four months. Actually, it wasn’t even to bed. It had been a frantic, passion filled five-minute indiscretion in a crowded dressing room with a clothing manufacturer after a fashion show.

The spectacular man snapped Rita out of her reverie when he held up a finger. Covering the phone speaker, he said, “Sorry ‘bout this, but you’re early. I’ll be with you as soon as I can.”

Rita didn’t, couldn’t say anything, so he went back to his conversation.

He said I was early. The digital clock on the wall read 1:49. That can’t be. She looked at her watch—One fifty. Impossible. Five minutes ago it read Two-forty four.

When the man finished he looked up and Rita swore she saw a halo over his head. “Okay, I’m all yours.” Would that were true. “Are you my two o’clock?”

“Good. Cat got your tongue?” He glided over and walked around her once checking out the front sides and rear apparently admiring her slender shape. “Hmmm” The closer he got the warmer Rita’s loins felt. After circling her, he shook her hand. Rita’s moist needy place was simmering. He flashed a friendly smile. “My name is Nikolas Cre’mel and I’ll be photographing you today. All right?”

“Are you ready to get started?”

She nodded once more.

“I must say you are a beauty.”

At last, Rita found her voice. “So are you.”

Nikolas’s eyes sparkled. He threw back his head and roared. After he stopped laughing he said, “When you finally speak, you say the damnedest things. How long have you bee…” Nikolas stopped, abruptly.

Rita’s gaze followed his glance down to his suddenly bulging crotch. After retreating behind his desk, he looked up and said, “Where was I? We’ll start with you fully dressed. Go in the dressing room and pick out your favorite of the three gowns, then come back out here.” 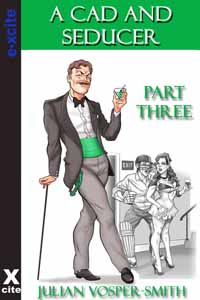 A Cad and Seducer - Part Three
Julian Vosper-Smith
In Shelf
$1.99