One Week in Paradise (MFM)

The Doms of Sybaris Cove 1

Note: This for-sale version has been revised and expanded and is at 26,730 words. The original short version at 21,411 words is available for free only inside the BookStrand App.

One Week in Paradise (MFM)

The Doms of Sybaris Cove 1 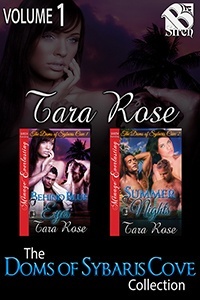 “We would love to prove her wrong,” said Dallas, slowly, as if choosing his words. “But if you heard that much, you already know we’re not going to use someone that way. It’s not right.”

She moved closer, inhaling the combined scents of their cologne. They couldn’t leave the island, but that didn’t stop them from having things flown in or brought over by boat, including expensive cologne and clothing. They not only looked like a million bucks, they smelled like it. And now, hearing Dallas confirm that they’d never use her only spurred her on. It was as if she had no control over her body or the words about to tumble out of her mouth, but she didn’t care. She simply let it happen.

“What if the person agreed to pretend to go along with it? Lucie would never have to know, and she would lose the bet.”

“It would take more than someone pretending to go along with it to fool my sister. Surely you know that. She’d demand proof of some sort. And it would take phenomenal acting skills on the part of the woman.”

Celina’s pussy grew wetter, and her clit began to throb. “What sort of proof would she demand?” Her voice came out breathy. They’d hear that. And certainly they could see her physical reaction right now. Was this real? Was she really having this conversation with the two men who had starred in her fantasies for years?

“Well, photos perhaps. Even video. She’d definitely be watching carefully. And since she knows us so well, she’d detect any hint of deceit from us.”

Dallas nodded. “And whoever helped us with this ruse would have to be on her guard 24/7 for the entire week.”

“What if the woman were going to be in New Orleans on Wednesday? Then she’d only have to put on a show for six days.”

Dallas laughed, but it wasn’t derisive. Instead, it conjured up images of satin sheets, candlelit rooms, and naked, sweaty bodies writhing in bed. “This woman would still have to put on one hell of a show.” Well, at least now they knew. And they still hadn’t bolted. This was too good to be true.

“And, not to be crude,” said Arizona, “but we’re only human. Sex with this woman might still happen, even if we are only trying to put on a show and convince Lucie that it did occur.”

Celina struggled to keep breathing. “I realize that.”

“Why are you offering to help us? She’s your boss.” And they were both too intelligent and too devoted to Phoebe’s Playthings to simply agree to this. Of course they’d want to understand her motivation. Both men were next in line for the CEO positions, after all. Their fathers, Asa Durante and Tim Raleigh, ran the company for now, but everyone knew Arizona and Dallas would one day take over. It made them both all the more vulnerable to women only after their names and money.

Celina stared into Arizona’s gray eyes. In this light, they almost looked silver, like moonlight. She could fall into that silver pool of light and never resurface. She wanted to do this. She had no idea why, but because it was such an impulsive decision, that only made her more determined to go through with it. Now all she had to do was convince them that she could pull it off.

“Because she threw me aside as if I meant nothing. You heard her. She believes I’ll land this job and then I’ll leave the island forever. She completely dismissed me. And what does that say about you two? She believes you’d coldly use someone you’ve known your entire lives, just to prove a point.” She’d never spoken out against Lucie like this, but once she started, she couldn’t seem to stop.

“My sister is a cold bitch. You know that. Why now? Why this?”

Celina took a deep breath. Fate certainly was a fucked-up entity. Now, after all this time, she finally had the perfect segue to tell these two her enduring fantasies. And it would mean nothing in the end.

But if they agreed, at least she’d have one week. She’d have one perfect week in paradise with the objects of her undying lust. She had to tell them. It was the only thing to say at that moment. Otherwise they’d go home and so would she, and that would be the end of her one chance.

“Because I haven’t stopped fantasizing about the two of you since I was old enough to legally do so. Because you’re the most enigmatic, handsome men I’ve ever met, and as much as I respect Lucie’s skill to negotiate and draw up a contract, she’s also a hard person to work for. And now I realize how little she actually values me.”

She licked her lips as she studied their faces. So far, so good. No signs of disgust or revulsion, and no anger. Only interest and—dare she acknowledge it—lust shone forth from their eyes. Her entire body trembled, but she finished what she had to say.

“She values hard work and talent, but she doesn’t respect people. She also doesn’t respect you two, and that surprised me. However, you both showed amazing strength of character when you turned her down. Thank you for the things you said in her office. I’m honored that you respect me enough not to use me. You both intrigue me. You always have. And I want to help you win your bet…just to prove her wrong.”

Arizona gave each ass cheek a gentle smack, and Celina had to grasp the cushion because it bobbled so much she thought it was going to overturn her into the water. They all laughed. “Well, so much for effect,” he said. “That was supposed to be sexy. Why don’t you climb off there and let us look at you, beautiful?”

Oh my. How could she resist an invitation that included him calling her “beautiful”? Celina rolled off and then stood up. She was a bit shorter than they were, but the water still didn’t cover her breasts. She faced them, keeping her eyes locked on their expressions. Both went slack-jawed at the same time and she had to force back a laugh. She knew her tits were nice, but seeing them react this way still gave her a thrill beyond anything she could have imagined.

“Come here.” Dallas’s voice was gruff. He pulled her close and devoured her mouth in a kiss so hot, she expected any second to hear the water hiss. She wrapped her arms around his broad shoulders and moaned loudly as his tongue and teeth raked the inside of her mouth. His body was so warm, and when his dick brushed up against her, all she could think about was fucking him.

When he released the kiss, he cupped her face and gazed at her with so much intensity, she was certain she’d stop breathing. “You are so fucking sexy. I have to tell you this. I’ve…we’ve both…had a thing for you for a long, long time.”

“I didn’t know that.” Was it true, or was he simply saying it because she’d revealed her fantasies to them earlier? She hoped it was the former.

When Dallas released the embrace, Arizona reached for her. He kissed her as well, and Celina actually grew dizzy as he brushed his hands up and down her back and across her ass. She tangled her fingers in his hair, loving the silky texture of it.

When he released the kiss, he smiled at her in a sexy combination of lust and excitement, which made her want to squeal. He was just as thrilled about this as she was, and all her earlier trepidation melted away. He took her hand. “Let’s get out of this pool for now. We can come back later when it’s dark and swim under the stars.”

As she started to wade toward the edge of the pool, Arizona scooped her up in his arms, forcing peals of laughter from her throat. “You’re walking too damn slow.”

Dallas retrieved her clothes and followed them back into Arizona’s house. Arizona carried her up a flight of open stairs, and she marveled at his strength. When they reached the top, she swiveled her head around, trying to take in everything. They were in a loft, dominated by a large bed. Scattered throughout the room was bondage furniture, and she moaned softly as she eyed it.

“Later,” he said, grinning at her in a way that made her pussy wet all over again. “Right now, I’m going to lick every square inch of your luscious body, and then I’m going to fuck you silly. Let’s see Lucie trip you up after that.”

Celina could only stare into his eyes as he laid her gently on the bed, then climbed on top of her and covered her with the length of his body. She cried out as wave after wave of passion rocked her core. He kissed her neck then trailed his tongue between her breasts. He cupped them, squeezing them in strong hands, and then bent his head to lick and suck her nipples.

Dallas crawled on the bed and kissed her, and then he spoke softly in her ear. “I’ve never made love to a girl at the same time as Arizona. This is new for us, but I like it so far. I’m going to lick you, too, and I’m going to wear us both out. Lucie won’t be able to find a chink in your story.”

She gazed into his eyes and giggled as she imagined the look of frustration on Lucie’s face. Arizona let go of her nipples long enough to give Dallas an exasperated look. “Less talk. More licking and sucking.”

Arizona trailed his tongue down Celina’s abdomen, and softly wolf whistled when he realized her pussy was shaved. “Oh, I love that. Thank you.”

“I didn’t know you did, but now I’m glad I do.” She sounded like an idiot, and that forced more giggles from her throat. She couldn’t even think right now. The realization of what was happening overwhelmed her, and brought every happy thought she’d ever had rushing to the surface at the same time.

“We both like it shaved.” Dallas took Arizona’s place at her breasts, gently biting and licking her nipples. Celina grabbed his head, trying to pull him closer while she writhed on the bed. When Arizona spread her legs and began to tease her pussy lips with his teeth and tongue, she cried out again.

She could hardly breathe as Arizona licked her from her clit to her asshole, back and forth, until she was so wet she could feel her juices trickling onto her upper thighs. Dallas straddled her chest and squeezed her breasts together, then pushed his cock between them. She couldn’t stop staring at it. Thick, red, and glistening with pre-cum, all she wanted to do was suck it dry.

“Fuck you. Where’s the fucking lube?”

Arizona sighed loudly. “Top dresser drawer. Condoms and small toys are in there, too.” He winked at Celina. “Might as well bring those over with the lube.”