Living life on Kaddaka station was predictable and profitable. Mala's talent for undetectable repairs has made her quite wealthy and the station quite popular. When a Reflex ship comes in hot, out of control and unable to stop, she is the woman for the job. The job itself is an audition for the Sector Guard, but unless Mala is successful the passengers of the ship will never be able to tell her the good news.

Isabi has been less than enthusiastic about meeting his new partner, until he sees her. Suddenly his interest is peaked. She doesn't seem to notice the pheromones that he exudes and she certainly doesn't fawn all over him. This woman may be worthy of her position as his partner, and he will not have her working with anyone else. Their talents make them the perfect team, now he just has to prove it to her.

Taking off her EVA suit was a lot easier than putting it on. Boots first, then helmet and finally, she unsealed the baggy thing. She stumbled free and stretched just as the hatch opened to reveal the occupants of the ship.

"Holy mother of stars," Mala whispered it as quietly as she could, but there was no getting around the fact that the male Selna was one of the most attractive things she had ever seen. She shook her head, of course he was. All Selna put out pheromones causing compatible races to want to mate. Mala's mixed bloodline was no exception.

She stayed out of their way and merely nodded to the pilot as she passed. It was easy to determine that she was the controller for the ship. The ports in her wrists gave it away. The pilot looked with a smile between Mala and Isabi. Apparently, Mala should have been writhing on the floor in front of the Selna. That just wasn't her style.

Her repair crew helped her look busy as the occupants made the long walk to the end of the repair bay and they waited until the Selna and pilot were out the door. The instant that the coast was clear, Mala stripped off her gloves and ran her hands over the hull. The minor and major damage caused by the blasts ceased to exist at her touch, the metal joining, sealing and healing under her fingers.

This was why she made the credits that she did. The money was compensation for the perfect repairs that she was capable of. It was her one skill, this repair talent, her freak factor when it came to blending in with other techs.

She moved slowly along the ship, inch by inch, clearing and eradicating all trace of the battle. Whatever had hurt this beautiful ship had been brutal. The damage had been deliberate and designed to turn the ship into a paralyzed meteor, it had worked. The poor baby.

She was murmuring to the ship when she reached the engine damage. "Gergar, I need some metal here." She stroked the superficial damage on the exterior of the housing and waited for the hand to tap her shoulder. She took the metal sheet blindly and held it in place, feeling it melt into the surface of the ship. She could repair anything as long as she had enough materials to patch up the holes.

"I am going to need three more of those if this engine was any indication." She clambered over the ship, keeping her focus on feeling the entirety of the ship at all times. It took her two more hours, but at last she was finished. Dizzy and terribly pleased with herself, Mala sat heavily next to the ship and turned to face her crew. Dismay filled her.

"You know, if I hadn't seen it for myself, I never would have believed it."

The Selna from the ship leaned on one of the pylons and played with one of the chunks of metal she had been using to reconstitute the engines.

"The report was quite insistent that she was capable of it. I am glad to see that it was not exaggerated." The pilot was smiling.

Whatever race she was from was in Mala's own makeup. She could feel kinship with the strange pale creature with its wide eyes and cheerful grin. Her crew was huddled together near the door, mouths gagged and arms and tail confined. "Let them go and tell me what you want."

The beautiful Selna moved close to her and whispered, "We want you." 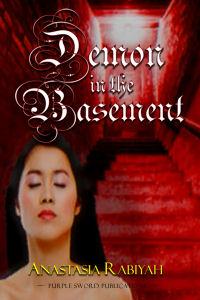 Demon in the Basement
Anastasia Rabiyah
In Shelf
$4.50