Tricia Williams has been handed over to the Sector Guard, her talent for tranquilizing those around her has become dangerous and uncontrolled. The Sector Guard techs rise to the challenge and in no time, Tricia has been outfitted with a uniform that will let her eat and converse in public without putting her in a bubble. Guardian is her new commanding officer and they have met before. When she was a mediator and he was joining the Alliance, she mediated his contract and he took a place in her nocturnal fantasies from that day onward. Now, assigned to Guardian as a partner, Pax has several things to deal with, and her life depends on his attention to detail. If he would stop staring at her butt, things would go a lot smoother.

“I wouldn’t choose anywhere else. If you run into her, ask Pilot about it in more detail. As the first Guardsman, she might have an insight that I lack.”

Tricia made a face at the monitor and laughed outright as the image of a hand with the middle finger extended came up on the screen. “Charming, Aggie.”

“I do try. We are coming up on Morganti. Star Breaker is en route to escort the shuttle in. The staff from the base has already made contact and will be loading you into their shuttle. This is where I wish you good luck. Once your bubble is unhooked, I won’t be able to speak to you.”

“I know. It has been wonderful to have you to talk to though. Those stiffs at the Citadel didn’t even want me to have a book in here.”

“I have passed your appreciation to the captain. I had several packs of cards made for crew members and he parted with his personal set.”

Tricia swept the cards into a pile and tapped them square. “Would he like them back?”

“You know you are under contagion protocols. Anything in that room that isn’t you is up for scorching.”

She grumbled silently. Her talent had been refined and honed by the Citadel to the point where she could simply touch, speak to or be in the same room with someone and they would go from irritated to placid in an instant. Her very voice was considered toxic and even Aggie had to use an audio filter so as not to be touched by her talent.

Talent or curse, Tricia couldn’t make up her mind. She was on the fence as to what the classification for her condition was.

“Thanks for the sympathetic ear, Aggie. I hope to see you soon.”

A laugh came through the speakers as the door to the hold opened to display four friendly faced base staff. “See me or hear me?”

“Whatever. It was nice to have another human to talk to.”

“Same here—” Her voice cut off as the staffers disconnected the leads to the walls of Tricia’s bubble.

Thick layers of clear plexi were sealed and without the air coming in through the umbilical, she had less than an hour. It was a good thing that the crew that moved her was efficient.

They trundled her out of the bay in which her bubbled had been installed and into a shuttle bay where a large transport vehicle was waiting.

Something was wrong. There was no Sector Guard logo on the side of the ship. Frantically, Tricia ran to the com and tried to connect, but there was no answer.

Her escort noted her frenzy and moved quickly, their eyes keeping a look out for any members of the ship’s crew. Tricia’s heart sank when a staff member from the Deckar came around the corner and one of her escorts blasted him.

She was being kidnapped and she couldn’t get out of the damned cage! 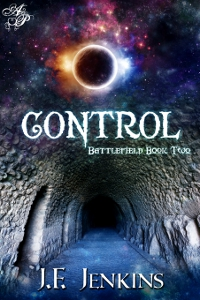