Guardians of the Gray Tower 4

What does a man about to enter the priesthood do if he meets someone who makes him question his calling? Jai Weiling has come to Winterreach to spend his Time of Testing, a period that prospective priests spend experiencing the worldly pleasures they will forsake as priests of Salara. Guardian Brax Lockeed is content with his life until his eyes meet the green-eyed gaze of a stranger. He knows that he should keep his hands off the young priest-to-be, especially since the Gray are currently kept busy trying to locate the man who was behind the assassination of their queen. But when Jai tells him that he wants Brax to become his lover, he can’t resist. Can their faith in one another save Emryn from a traitor? And will Jai give up his dreams of the priesthood for a life with Brax?

Guardians of the Gray Tower 4

More From Guardians of the Gray Tower

“So where’s the priest-in-training?” Pike asked.

Javan looked around and frowned. “I’m not sure where he’s disappeared to. Goddess knows, I’m having a hard time keeping up with the boy.”

“He may be twenty in years, but he’s about ten in experience.” Javan’s eyes continued to scan the surrounding faces. “If that fool gets himself in trouble his first night in Winterreach, I’ll never hear the end of it. My mother made me swear to Salara that I would keep him safe.”

“Oh, let the boy have a little fun. After all, that’s the whole point of this testing period, right?” Brax was beginning to feel sorry for the kid. If everyone was so overprotective of him, he probably needed to let loose a bit.

Javan shrugged. “In theory, yes. But most of the people who go through the testing period don’t really do anything different from their usual routine. I have a feeling my brother is thinking of really pushing the limits while he’s here.”

“He’ll be fine, Javan.” Edrick’s voice was amused but reassuring. “Let the boy try his wings.”

“I can’t imagine what my father was thinking, sending him here for the testing period. Surely it would have been better to have kept him at home in Westmarch.”

“Perhaps he was thinking that the boy has been too sheltered to make such an important decision without seeing a bit more of the world than his home and the temple. I believe your father realizes that he and your mother have not really allowed your brother the opportunity to experience life. How can the boy possibly know if he wants to dedicate his life to serving Salara and give up all the trappings of a normal life if he’s never known anything else?” Edrick’s voice was calm and reassuring.

“I know you’re right.” Javan said it grudgingly, and Brax had to hide a smile at the sulky look on his face. “But still…”

“Still nothing.” Rom walked up and slid an arm around his bondmate. “You’re worse than a mother hen. The boy will be fine. Quit worrying so much. Here”—he pressed a glass into Javan’s hand—“drink this and relax. Enjoy the party.”

Javan took a drink, and then said, “But I don’t know where he’s gotten off to, Rom.”

Caid winked. “Maybe he’s in some dark corner with a merry widow getting his first taste of carnal pleasure.”

Brax laughed out loud at the look on Javan’s face at that comment.

“Goddess, you don’t really think that he—”

Rom shut Javan up by shoving a canapé into his open mouth. “I don’t think it’s any of our business if he is. That’s the whole purpose of this testing, right? For him to experience all of the many pleasures that he will be giving up if he decides to take his vows.”

“Javan, you know you’re being ridiculous.” Another glare, this time directed at the slender nobleman.

Brax nudged Pike. “I think we’ll leave you four to discuss this further. Pike and I see some friends across the room. We’re just going to say hello to them.” With alacrity, Brax and Pike said their good-byes, moving quickly to where several of their friends were gathered. They were greeted with smiles and nods of welcome as they joined the group.

“Hello, Brax. Surprised to see you and Pike here. Weren’t you two going to join that game at Madame Lingo’s?” a fellow Guardian named Quinlan asked.

He shrugged. “We’re heading over pretty soon. We had to stop by to meet Javan’s brother first.”

They stood chatting with the others for several minutes. Brax began tuning out the conversation, an itch between his shoulder blades giving him the feeling he was being watched. His eyes slid around the room, trying to locate the source of that penetrating gaze. At last his attention was caught by a green-eyed stare several feet away. He drew in a quick breath as he got a look at the man who was studying him with an arrested expression on his face. He was gorgeous!

Long, black hair, straight as a board, hung in a silken river to the man’s waist. His face was delicate, as if carved from marble, the cheekbones razor sharp. A shallow dimple shadowed his chin. His lips were full, the top one a bit larger than the lower, giving the man the look of someone expecting to be kissed at any moment. He wasn’t very tall, and Brax knew that the man’s head would probably only reach his shoulders. As he watched, the other man’s tongue darted out to moisten his lips, and Brax felt his cock tighten at the unconsciously provocative movement.

He heard Pike say something about leaving soon, but he was too entranced with the object of his attention to pay much attention. Instead he murmured, “You go on ahead. I think I’ll stay a while.”

Then he began to move toward the man, who blushed and quickly turned away to disappear into the crowd.

Brax raised himself to stare down at Jai. “You’ve never had a climax before?”

“Not even by your own hand. When you were a teenager?”

He shook his head again, peeking up at Brax, whose eyes had widened in amazement.

“I never thought…that is, I knew you were inexperienced, but I was sure you’d at least…well…seven hells.” Brax sputtered to a stop, and then a grin creased his face. “Well, I’m glad it wasn’t a disappointment to you.”

Jai managed an embarrassed chuckle. “Definitely not.” Then he looked off to the side, avoiding Brax’s gaze as he spoke again. “I know I’m hopelessly naïve. I hope that I’m not too much of a disappointment to you. I have no idea how to act or what to do.”

Brax’s hand came to nudge against his chin, turning Jai’s face back to meet his gaze, now serious and soft. “You could never disappoint me. Though I’m surprised, I find it very…pleasing that I’m the first man to ever give you an orgasm. To ever take you in his mouth. Tonight there will be lots of firsts. We’re just getting started, Jai.” He moved against Jai, rubbing his still-erect cock against him and reminding him that Brax hadn’t come.

He flushed again, this time with guilt. “I’m so sorry, Brax. I completely forgot that you hadn’t…that you didn’t…I’m such a fool. You haven’t taken your own pleasure.”

Brax chuckled. “Don’t worry. I’ll get there. I don’t mind going slowly. And hearing you come. Tasting you. Watching you. All of those things give me pleasure, too, you know.”

“But I wouldn’t complain if you decided you’d like to touch me, too.” With that, Brax rolled over onto his back, offering his body to Jai. Jai quivered with eagerness.

Sitting up, he let his eyes run over the exciting, masculine figure before him. He couldn’t wait to explore Brax. Tentatively he reached out, his hand stroking lightly across the hair-roughened chest to find and prod against the masculine nipples buried in the slight thatch of curls. Brax wasn’t hairless like he and most of the other priest novices. Nor was he covered in burly hair like some of the peasant farmers he’d seen working in the fields without their shirts.

Instead, he had a light sprinkling of hair in the upper part of his chest that tapered to a narrow trickle as it crossed his abdomen and finally ended in the cluster of curls that surrounded his rampant erection. Jai’s finger followed that trail until he curled his hand around Brax’s cock, holding it tightly.

“Yes. Goddess, that feels good.” Brax’s hand came up to encircle his, directing him in how to stroke his cock. Jai caught on quickly, and Brax released him to lay back on the bed, his moans and words of encouragement whispered with hot demand. “Kiss it, Jai.”

He leaned down and pressed his lips against the head, letting his tongue dart out to taste the pre-cum that had beaded on the slit. He drew it in, relishing the salty sweetness. He proceeded to kiss his way down the length of the shaft and back up again. When he took the head into his mouth, he felt Brax arch up against him and heard the strangled moan from the other man.

Then Brax pulled him off and up to kiss him again with a hot, hungry need that was undeniable. When their lips parted, Brax gasped out, “Farking hells, I can’t take any more of that, Jai. I need to fuck you.”

Jai trembled, both with need and a twinge of fear, but he nodded his head in agreement. Brax sat up, his hands reaching out to turn Jai over and pull him up so that his knees were under him and his ass was lifted into the air. He used his own knees to prod Jai’s legs apart. “Stay like that.”

He nodded and tried to do as Brax had asked, consciously relaxing his sphincter muscles and allowing Brax’s large finger to penetrate into the tight channel. He felt the pressure as Brax pressed farther in, and then another finger joined the first. It pinched a little but wasn’t too bad. Brax paused. “Okay, Jai?”

Jai managed a nod. Then he felt the fingers moving, sliding in and out, twisting and turning, and he knew that Brax was spreading him, opening him so he would be ready for the larger penetration of the man’s cock. When Jai remembered the size of that rod, he trembled. How would he ever take all of that into his body? Would it hurt? How could that possibly be pleasurable?

Then Brax was moving again, setting the bottle down on the tabletop. Moments later, Jai felt something pressing against his hole, something a lot larger than Brax’s fingers. He helplessly tensed again. Brax just petted him, murmuring words of encouragement, and continued to press in. It started to hurt. “Push down.” Jai heard the whispered command, and he mindlessly did as Brax commanded, anything to stop the pain. With a pop, he felt the head of Brax’s penis slide past the rim and into his anal tunnel. It still hurt, but now accompanying the pain was a dark and wicked pleasure. As Brax thrust farther and farther inside, the pain and pleasure began to blend together in a spiraling arc of need and anticipation. Then Brax was all the way in, his balls wedged against the mounds of Jai’s ass. 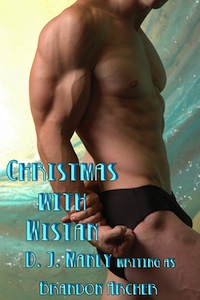