Randall Stone is the stuff of heroes, a mercenary given a dishonorable discharge from the army he has served with his life. Refusal to obey orders in favor of saving a team member’s life put a premature end to Stone’s illustrious career. But, the government is still interested in using the skills they've taught Major Rand Stone, and he continues to work as a freelance trouble shooter with his hand-picked team.

A playboy who enjoys women and his freedom, Stone shocks everyone when he falls in love with an unlikely woman. When an old enemy surfaces from Stone’s past, taking the one thing Randall will not lose, a deadly hunt begins. Robin Bourne is declared dead, killed in a car crash while Stone was on a mission – but in his soul, he knows she’s alive, and the mission ahead of him now is intensely personal. Backed with his team, Stone relentlessly pursues the old friend who’s dared to go after him by taking the woman he loves. 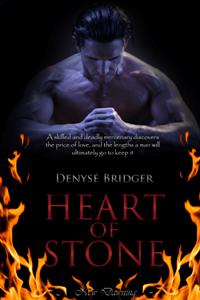 Brookman shook his head. “Is it really necessary?”

Stone smiled, an expression that was a world away from the casual devilment the shift in features usually conveyed. There was nothing, only the cold mask Donald knew hid the more lethal aspects of Rand’s personality. “…He’s a stranger in so many ways. Like there are two different people living in the same body, and I only know one face in many…” Robin’s voice whispered the words in his memory, and he began to understand the statement with new clarity as Rand stared at the blackened remnants of the woman he had loved much more than he’d had time to realize.

“I want everything double-checked,” Rand said softly. “Triple-checked, if necessary. I don’t want any doubt, Donald,” he finished as he turned to leave.

“Because I have to know!” he snarled before Brookman could finish the query. At the police station Rand was given the reports to read, and he questioned Eric Karmac thoroughly on each piece of evidence the police had collected.

An hour later, they were headed for the Western Star Health Club. The health club had been established a couple of years earlier as a convenient cover operation for the government affiliated mercenary team. Rand had an apartment above the club, and his fortress-like command center was below ground. He conducted most of his life from the confines of the club, when he wasn’t trotting all over the world for Brookman. “What are you going to do about her mother?” Brookman asked.

Donald decided to wait for a few minutes, until they were inside the club and he knew if he’d have to make an announcement in front of Robin’s family.

As (bad) luck would have it, both mother and sister were present, sitting well apart from the members of Randall’s mercenary team. Clara’s hostility seemed to be directed at Lucky.

“You must be Randall Stone,” she said, rising from her seat the instant Rand came through the door.

“I want to see my daughter’s home, and I’ve been told that will be impossible without your consent.”

Rand glanced at Lucky and resisted a smile when the other man merely shrugged.

“There may be a slight problem there,” Donald interjected.

Clara’s icy gaze moved. There was little resemblance between Robin and her mother, and the lack of warmth that emanated from the well-groomed, chic woman who glared at him was as striking as Robin’s earthy, easy-going manner.

Aureena Shelton was a mirror image of her mother—tall, slender, fair. “What type of problem?” she asked, her annoyance clear to everyone.

“Robin’s left very specific instructions on how things are to be handled, and who is to handle them,” Donald told them, feeling the various levels of surprise his words evoked. “All decisions are to be made by the person she’s left in control of her estate.”