I Want to Bite That (MMF)

I Want to Bite That (MMF)

More From An Author's Sexy Adventure

It was after their last meeting three weeks before that Carol had casually wandered up to her. She could still hear the brief discussion in her mind. “I may be way off the mark here, but you seem rather interested in erotica. Your comments are always very insightful.” Carol gave her a small slip of paper. “Just a thought.” With a knowing smile, Carol had gone for her coat.

Airy had felt the deep frown forming on her face as she unfolded the cryptic note. She still had it taped to the side of her computer screen and she read it again. This might help with that itch of curiosity. It’s trustworthy and completely worth the sign-up fee. Just saying.

Airy had called the number, speaking with a very nice-sounding woman who informed her that it was a private web-based matching service for those with alternate desires. She hadn’t exactly been sure what that entailed, but she had wanted to inject some life back into her world, and it sounded like a perfect way to do it. She had been emailed a form to complete, and had promptly done so, being completely truthful, even though her answers to some of the questions had left her flushed with embarrassment. The only thing she lied about a little bit was her weight. Her scale was revealing surprisingly lower numbers each week since Peter’s death, but she was still seventeen pounds over where she wanted to be.

The hardest part had been finding a good, recent photograph. Airy had ended up doing a selfie photo shoot until she could capture one that she liked.

Pulling her mind back to the present, she shook the mouse to wake up the screen, and clicked on her email. She was waiting for two edits, but didn’t think they would be there. They never sent edits on the weekend.

There was pretty much exactly what she expected, a bunch of stupid ads from sites she hadn’t blocked yet and pleas for money. There was one she didn’t recognize, Request for acknowledgement, Intimate Match. Airy clicked on it, and her heart sprang into her throat. There was a photo of two very attractive men with thick brown hair. She stared at them for a moment, and sighed. This was certainly a match that must have been sent to the wrong person.

She read the text below the photos. Dear Miss Blithe-Smith, We are happy to inform you that your application has been accepted. Your information has been posted to our site. Your temporary password is your full birthday with no hyphens. Please change it.

This notice is being sent to you because two of our other members in your area have requested a meeting. You are under no obligation to reply, but feel free to read the attached personal note, and to check their profile at the link supplied. You can also search through our database if you had something different in mind. Have a nice day.

Airy scrolled down to the note, convinced it was meant for someone else.

Hey, Airy. We are Trevor, on the right, and Lance, on the left. We were scrolling through the site, looking for someone new and interesting, and you sound like you fit the bill perfectly. We are 35 and 38, into ménage and fun BDSM-type play. You didn’t give a list of hard limits, so we can discuss that. We’re both bi and Lance is a Dom, but we are both open to switch up who is on top if you want to understand that side of it. You said that you were looking to learn and we would love to teach you. We know that you’re older than us, but it doesn’t matter on our part. We would be honoured to take you out to dinner. Please reply with a time and a place. We live in the North Haven area, and one of our favorite restaurants is the Red Lobster.

It was one of her favorites, too.

The email was meant for her, and she scrolled back up to the photos. They were absolutely gorgeous. What the hell did they want with a forty-seven-year-old widow? Airy giggled, her bottom lip captured between her teeth as she sucked on the slightly lumpy scar. The skin over it was very sensitive, and she had once adored it when Peter dragged it between his teeth. One time before her death, she really wanted to be kissed like that again.

Airy scrolled back down to the link and clicked on it. There were various photos of both men, their bodies muscled and tan, as they stood before an ocean, or on a forest-cloaked path. They were obviously into outdoor activities, and she went down to their names. There were actually two different files, combined like a comparison, side by side. It gave their names Trevor Anex and Lance Graves. Trevor was 35, hair light brown, eyes hazel, height 5’11”. He was a market researcher, whatever the hell that was.

Lance was 38 with brown hair, blue and green eyes, 6ft tall, and he was also a market researcher. The files went on to list their preferences, hard limits, and various other personal information. At the bottom was a certification that they had been researched and that their history files were clear.

Airy clicked on her own file and read the information. It was just as she had written it, and she had the same certification at the bottom. Closing the browser, she went back to the email, hitting the “reply” button.

The idea of answering them was slightly intimidating. She was 12 years older than Trevor. Standing up, she walked into the bedroom and looked at herself in the full-length mirror. She lifted her shirt and cringed. She had always been overweight, but in the past few years, her body had shifted, and now she had more volume in her tummy. She had a horrible roll there that had gone down, but not completely. Airy pushed on it with her finger, grunting.

Trevor lay back down beside her, fiddling with the line of hard wax that was still present on her stomach. It had cooled tightly and each breath she was taking was flexing and tugging against it. His fingernail trailed in a line, first downward from the center of her ribs and then encircling the bottom of the wax, to move upward.

Moving his hands, Lance slowly peeled the skin back with his fingers. He was exposing her inner flesh, blowing on it to let her know how open she now was to his attention. Then he slid back and got up. Trevor moved his body upward, capturing her eyes as he smiled. His stare was intense and very sexual, before his palm touched her cheek, his lips lowering to her mouth. Airy heard Lance’s footsteps, but her eyes were closed as she enjoyed Trevor’s kiss. His tongue was dancing around hers, caressing her flesh, claiming her complete attention.

She felt the lounger shift between her legs again. Lance lifted her ass and placed what felt like a towel beneath it. He then pushed her outer lips wide with what felt like one hand.

Gasping, Airy opened her eyes, staring at Trevor as the kiss continued unabated. Lance slowly pushed something very cold into her pussy. It was certainly ice, but no ice cube was this long. It filled her, making her cunt spasm with reaction that only made it worse as the muscles clamped around the frozen item.

Trevor leaned back slightly and then turned his head to look at Lance. He chuckled. “Amazing what you can do with a Popsicle tray.”

Airy suddenly understood what the feeling was. She had purchased the plastic re-freezable tray for her grandchildren to make fruit pops for them. Obviously, Lance had it for a different reason. He was slowly moving the ice-pop and in and out of her now aching pussy. It felt oddly good, but so damn cold. It was also melting and running down the crack of her ass.

Lance was watching her with eyes filled with amusement. “Feel good?”

“I really hate that saying. You do know.”

Airy had said it without thinking. “It feels cold and gives a completely different sensation than a warm dick. It kind of makes me tingle inside.”

He withdrew it and then rubbed her skin with a cloth that felt far warmer than it probably was. A moment later, he leaned into her body, slowly filling her with his very warm dick. Airy realized that he must have had the warm washcloth wrapped around it to make the skin hotter than normal. She gasped, her reaction uncontrollable as Trevor flipped around and began to lick her clit. Her pussy tightened around Lance, her mouth open as she inhaled a whimpering gasp of air. The muscles began to flex rapidly, her hips slamming upward to meet his body and get the most out of the reaction. Trevor leaned on her, pushing her down and holding her still as he lapped at her now-oversensitive clit. Her thighs strained against him, tremors flaring through her as the sensation came to a slow finish.

Lance remained within her, his cock still hard. She had no idea how that had happened. Peter had once tried ice cubes, but the cold inside her had withered his dick. It hadn’t done that to Lance. As a matter of fact, she was no longer cold.

Trevor sat up, appearing completely put-out, an adorable pout on his full lips. Lance grabbed his hair and pulled him closer to kiss him. He came away from it, licking his lips. “Nice. You taste like sweet pussy.”

That made Trevor chuckle. Lance backed off and stood up, his cock jutting out before him like a pink sword. “Tell me how you want this.”

A brilliant smile lit Trevor’s formerly sour face. “I want to fuck her and I want you to fuck me. It has been forever.”

Holy shit. She was going to see them have sex? She wasn’t going to be able to see anything, though, not really. Maybe it was weird, but she really wanted to see it happen.

“Wow, did that light her eyes up like a candle in the darkness. Are you into seeing us fuck, Airy?” asked Lance.

She nodded, unable to restrain her grin.

He gestured to her cunt with a flip of his hand and then stood, going over to the closet and opening the door. Inside it was a full-length mirror and he stepped into her line of vision and adjusted it so she could see perfectly as Trevor knelt between her thighs. “Is that what you wanted?” 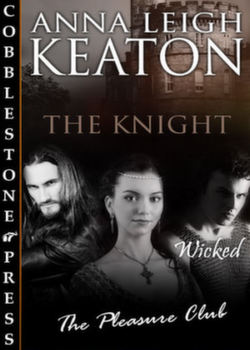 The Knight
Anna Leigh Keaton
In Shelf
$2.99
Tweets by
sirenbookstrand