Stepping quietly in the door of the five-story brownstone on the upper west side, Aurora slipped off her heels, set down her bag and quietly hung her overcoat in the closet. She made her way up the stairs toward the second floor living room where Nicholas spent most of his time.

Nicholas’ stomach flip-flopped when he saw Aurora standing in the entryway. She never ever failed to take his breath away.

“I love you,” she said quietly.

“You’ve had a long day,” he said softly as he took in the sight of her slight frame. At five-foot, five inches she appeared unassuming. After almost two years together, he knew better.

“A little longer than usual,” she conceded.

He gave her an admonishing look. “You were out the door before I was awake, Aurora. It’s almost ten PM”

She sighed heavily and then smiled weakly. “There’s lots on the go this week,” she said nonchalantly.

He studied her face as she lingered in the doorway, delicately swinging her designer slingback heels loosely from her fingers. There was something in her voice that made up for the obvious fatigue. “Are you heading to bed?”

He felt his throat thicken with desire. “Would you like to come and sit with me?” he asked huskily.

“Yes,” she said quietly before leaving her perch to proceed across the expansive room.

The strain of the day was visible on her face as she sat down on the sofa next to him. She tucked her delicate feet up underneath her and leaned into the ample cushions.

He knew she would decline but asked her anyway. “Do you want to talk about your day?”

She exhaled slowly. She desperately wanted to share the exciting news of F-Five’s bid to take over Mayberry but knew she couldn’t. Confidentiality was too important on this deal. “No,” she said reluctantly. “I wish I could, but I can’t.”

A wry smile slowly crossed his lips. “Wanna fuck about your day?”

“Oh babe, you have no idea how much that means.” He leaned forward and pressed his lips against her cheek. “You need me, don’t you?” he whispered as his fingers delicately pushed the thick brunette curls back from her beautiful face.

“Yes,” she finally admitted. There was something about the way Nicholas touched her that melted away her cares. She felt the tension and stress of the day melt as Nicholas’ hands travelled her body, slowly removing one piece of clothing after another. When she was completely nude, she watched as he purposefully removed his clothing. Watching him disrobe with the intention of pleasing her was deeply arousing. The ache between her legs was unbearable as he finally knelt in front of her.

“Have you been telling people what to do all day?” he asked knowingly.

“All day long,” she murmured as his lips brushed against her neck. The rich leathery scent of his cologne filled her nostrils as he leaned over her, pressing his hard cock between her legs, releasing warm fluid from her pussy.

He leaned back and looked her in the eye. “Are you going to tell me what to do?” he asked pointedly.

“Good girl,” he said eagerly. He had made it clear early in their relationship that he absolutely despised being told what to do, especially in bed. He would not tolerate her commands to perform to satisfy her whims. She had willingly obliged. She gave orders and commands all day long at the office. He was the last person she wanted to be telling what to do and how to do it, especially in bed.

He delicately pushed her knees apart. “Let me fuck you the way I know you need it, Aurora.”

A soft whimpering moan escaped her lips as he leaned forward. She held her breath as his cock pressed against her pussy, sliding easily inside. At a glance, some might call his cock average. It wasn’t enormous nor was it small. Aurora knew better. There was nothing average about Nicholas. She exhaled slowly as his cock sunk deep inside her. Oxygen evaded her lungs as he slowly pressed deep and hard until his flesh pressed against her damp and swollen pussy.

He slowly and methodically thrust against her while watching her writhe and listening to her moan as each delicate sensation fluttered through her body. His cock throbbed as she held his gaze. He desperately wanted to fuck her hard and fast but he knew that was no way to fuck someone like Aurora. It was three months into the relationship and he was on the brink of losing her when he learned a valuable lesson. He had naïvely assumed that someone is professionally aggressive as Aurora needed to be fucked aggressively, too. He knew now how wrong he had been. With so much of her day focused on maintaining control, he learned that when she was with him, he was the one that needed to take charge. He felt it was his personal responsibility to take away her cares and to give her back everything that had been demanded of her during the day. It was incredibly arousing for him to watch her stresses melt away as he so gently and tenderly loved her.

He could see the familiar signs that she was nearing the release that she so desperately needed. He ran his hands up the milky white skin of her toned calves until they came to rest on her knees. As he delivered a long slow thrust, he pressed down on her legs, spreading her knees wide. He felt his cock lurch as she let out a scream of delight. He held her knees firmly against the cushions as he delivered another firm press, burying his cock deep inside her glistening pussy. Her back arched as she let out a moan. As he thrust one more time, he leaned heavily against her and whispered his wish for her. “Come,” he urged.

She gripped the sofa tightly in her long delicate fingers and let out a cry as her body contorted under the weight of his. Like an earthquake, seismic waves of pleasure crashed through her body. Surge after surge of delight rippled from her core, through her torso, and out to each extremity. As the torrent of pleasure subsided, she opened her eyes. Her entire body relaxed as she slumped against the plush pillows that surrounded her. Nicholas still knelt between her legs, his cock buried deep inside her still throbbing pussy. His expression of pride in pleasing her made her feel safe and comfortable.

He leaned in and softly kissed her lips for the first time that evening. “Is that what you needed?”

She could barely speak. Her voice trembled as she nodded and said, “Yes. You’re exactly what I needed.”

“That’s what I want to hear,” he whispered between kisses. He pressed his damp lips against her cheek and then her neck, feeling the racing heartbeat of her jugular. “Do you want more?”

She desperately wanted more. She pushed him back ever so slightly to look into his captivating green eyes. She nodded slowly, not wanting to appear too eager.

He wasn’t letting her off so easily. “Tell me what I’m going to do to you, Aurora.”

His face was just inches from hers and he was still firmly planted between her knees. “You’re going to fuck me,” she said quietly.

He knew the answer before he even asked the question. “Slow and intense like I just fucked you?”

Her response was immediate. She shook her head.

“What am I going to do?” he asked earnestly as his fingers brushed her cheek.

There wasn’t a hit of memory from her day at the office in her thoughts as she answered. “You’re going to fuck me hard, Nicholas. You’re going to pound that hard cock into my pussy until it hurts,” she said hurriedly.

His balls suddenly ached for her. He leaned forward and bit her neck in anticipation of what was to come. “I’m going to give you exactly what you need, sweetheart.”

She squealed as he marked her neck. She knew she would be wearing a scarf for a few days to hide the fresh bite marks.

“Am I going to keep fucking you here?” he asked as he kissed his way around her breasts.

“No,” she said emphatically as she imagined where she wanted him. “You want me upstairs.”

He scooped her up and together they ascended the stairs to the fourth floor where the master bedroom, bath, and closets occupied the entire floor. The room was dimly lit by a set of Taylor Llorente floor lamps in the corner of the luxuriously decorated space. Aurora loved the space. It was warm and inviting she felt at home in this room. She stood in the doorway and inhaled deeply before slowly exhaling. She could feel her shoulders relax as Nicholas took her hand and led her across the hardwood floor. She wasn’t sure if it was the cool night air or the anticipation of Nicholas’ devoted attention that made her a shiver run through her body. As she reached the edge of the bed she had an overwhelming need for him to take her. She faced the mattress, folded back the covers, and laid her torso flat against the sheets. She heard Nicholas audibly murmur at the site of her bent over in front of him.

He stood behind her and pressed his thighs up against the back of her legs as he leaned forward and whispered, “is this what you need Aurora?”

“Yes,” she said emphatically. She could feel his large warm hands on the smooth skin of her ass, gently kneading and caressing her firmly toned bottom. “Please Nicholas,” she said with urgency. “You know what I need.”

Home for the Holiday
Wendy Stone
In Shelf
$6.00 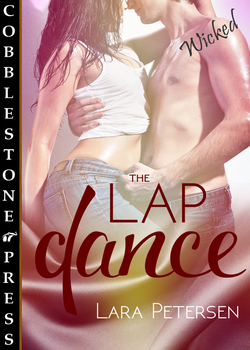 A Moth to a Flame (MF)
Cara Addison
In Shelf
$3.99
Tweets by
sirenbookstrand