It is 4300 and life on a distant planet as a Dom with an endless supply of delicious hot and oh so willing subs is a dream come true for Deon Winchester, especially as his enhancements have made him insatiable.

Oh yeah, he can last all night and performing in front of a few exclusive and well-paying patrons is a big turn-on, but Deon craves the love of a boy of his own. Problem is—his contract forbids any form of a relationship. He wants out and must convince his friend, Arjun, to escape with him. 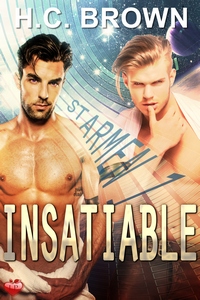 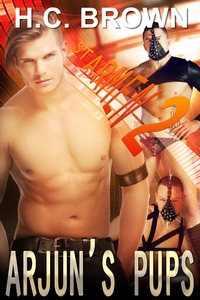 Tye tipped his head back, and his face held an expression of bliss. His full mouth opened slightly, and his tongue flicked out to wet his lips. Deon sat on the side of the bed and slowly caressed his thighs. He slid his hands around his buttocks, spreading him and sinking his fingers deep into the soft flesh. “Do you like it rough, Tye?”

This one would enjoy spanking. He lifted him across his knees. Tye’s hard nipples pressed against his thigh, and his silky hair brushed his legs. Inhaling his rich, masculine scent, Deon pushed his mind into the character of Apollo. He needed to provide the ultimate experience in the hope that Jamil would give him more assignments like this one. He ran his hand over Tye’s back in a long, sensual caress and cupped his muscular bottom again. He squeezed. He had such smooth skin, unmarked and the color of alabaster. The Commissioner’s son had never received discipline.

Deon stroked him from knee to thigh then took his time exploring the cleft of his ass. He used one finger to probe his tight hole, finding him stretched and ready for fucking. Interesting. Have you just removed a butt plug? Never mind, I will stretch you more than ever before. Tye moaned under his touch, and his pale skin pebbled into goose flesh. He pressed his fingers into the muscles of the man’s thighs. “You are a very bad boy to seek a droid lover. You should have a boyfriend to please you. I think I should punish you.”

He spanked him along each thigh, lingering on the sweet spot where the buttocks met the leg. Alternating harsh slaps with slow, soothing strokes of his hand. The loud smacks echoed around the room, punctuated by Tye’s shrieks of delight. By the time he moved to his bottom, he was writhing in ecstasy. Handprints covered his flesh, and his skin glowed like a ripe peach. He reached for a tube of lube and applied a generous amount to his tight hole. Sliding his fingers inside, he finger fucked him slowly until Tye trembled against his knees.

Deon groaned. Tye’s scent filled his nostrils, and his cock pressed hard into his belly. His temperature rose, sweat coated his body. I must find release. Deon dipped his fingers into his hot ass and found his pleasure spot. He caressed the grape, and the boy jerked and cried out. He removed his finger. “Do you want me to stop? No? I think you enjoy punishment.” He jammed his thumb into his ass.

“You take me so close to climax and yet deny me release.” Tye lifted his head. “Fuck me, Apollo, fuck me now.”