Rain, a she-wolf, was seduced by three brothers, werewolves of Clear Water village—Zurk, Arran, and Rander. She had been chosen by Colcu, the alpha, for mating. Colcu discovers that she gave herself to the lesser wolves and, in a fit of rage, he sentences her to death.

Colcu chases her through the Daribu Forest, but one human knight from Jarna, Thane Ragnirak, stumbles upon the two wolves fighting in the forest. Thane dispatches the larger wolf, Colcu, and saves Rain, unaware that she is a werewolf.

Thane has lost all that he cares for in a surprise invasion from the barbarian hoard, and he is now the sole survivor—the last knight.

Soon the heat begins to build between the she-wolf and the human while lost in the forest, searching for the road to Jarna. His plans to warn the kingdom of the impending invasion are put on hold as he discovers the pleasures of the she-wolf.

He kissed the nape of her neck and gently tugged at her ear with his teeth, his warm breaths washing across her flesh. “Don’t ever leave me again.”

She nudged him with her ass, bumping her tiny rump into his crotch. “Take me,” she gasped.

He swelled instantly against the crack of her ass cheeks. “Right now?” he grunted.

She took a wide stance, spreading her legs apart, and pressed against him. “Right now,” she echoed.

He didn’t need to be told twice. He glanced over at the Koltoi women, and they were watching intently and looked as if they wanted to speak, but they remained quiet after Thane gave them a stern look.

He gripped her slender hips and slid his cock beneath the warmth of her folds. He could feel her heat and the moistness of her lips. She was already slick for him. He slowly rubbed her with his cock, feeling her swollen pussy, holding her waist steady.

Velika suddenly laughed. “She is far too small for you, warrior. Try a woman your own size.”

Thane thought she was right. He could damage Rain if he penetrated her, and he had no intentions of doing that.

“Don’t listen to that feaire whore,” Rain whispered in a throaty voice. “Show them I am yours, and yours alone.” She craned her head back and kept her voice low. “Please put your cock in me, Thane. Force it in if you have to—I don’t care.” She bowed her back against him, straining against his girth, her wrists still suspended overhead.

His cock was already slick from arousal spilling from her center. Slowly he angled and went forward, feeling the tight squeeze around his head. She squirmed against him, panting heavily, her hips trembling as the head, fat and throbbing, inched toward her womb. She thrashed against the invasion, and her pelvis shuddered in his large hands.

Encased in a blissful heat, he pushed past the restrictions of her velvety walls and held himself halfway submerged into her sex. The squeeze of her inner muscles made it almost impossible to go any further. “I don’t want to hurt you, Rain.”

She thrust her hips back causing him to sink deeper and she yelped. “Oh, Goddess, help me. Do it...Thane. Please do it.”

He couldn’t take this any longer, he had to push through and feel all of this woman. He forced her hips back further, stretching her womb to the maximum, until he was root-deep. She bucked and flailed, but he steadied her. Pulling back, he began a slow, steady movement inside her. After the initial shock, she settled, he could see that as her body relaxed, losing some of her initial tension.

Taking hold of her small breasts, he angled into her pussy, delicately but with increasing speed. Every pass drew a whimper from Rain’s sweet lips. His cock was soaked, and her cream frothed the base of his shaft with every smooth stroke.

He wanted this amazing woman to be his forever and wished for this feeling to last a lifetime. Her pelvis began rotating against his thrusts, taking his punishment more readily, willingly. “Gods, Rain. Your pussy is so tight.” He moaned. “I wanted this for such a long time.” 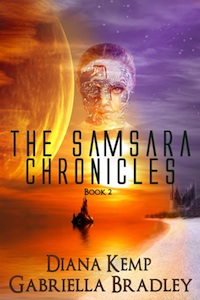