Living for the Act 3

On the verge of extinction after a long war, the women of Raskayen take the only chance to enlarge their population—they capture men from other worlds to use them in closed facilities. Restricted by rules, men are only for mating, not for love, and the clan chiefs watch their groups of fertile males closely.

In book three the clan chiefs learn by a hard lesson that their way of living may not be the only one possible for their planet. 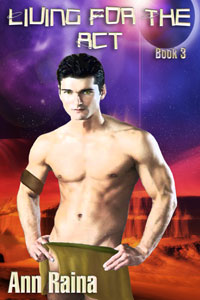 Living for the Act 3

"Relax, Taris, this is good for you. And no woman's gonna hurt you. They want to love you. They want you to make love to them, have children." Taris shuddered. "Sshh, don't fear me. Don't fear being helpless. It's arousing, not threatening. Imagine the woman going down on you…" She flipped back the loincloth to kiss his cock. "And licking and tasting you. Imagine her hot, sweaty skin on yours, pressing herself against you." Taris swallowed and started panting. Kalisha opened his pants and slowly pulled them down. He lifted his butt to help. "Imagine her shallow breath and her urging into your ear to go on." She gently pulled apart his legs and caressed his thighs with both hands. "Imagine her going down on you again like that." She ran her tongue up and down his shaft, relieved to see it grow to its full length. "And then when you think you can take no more, she tickles you." Kalisha took great pleasure in playing her tongue on his glans.

"Nah, that is just the beginning of her game with you, because she wants you hot and eager." Kalisha put a loop of rope around his ankles and connected them loosely with the foot end. Taris made a sound, but didn't order her to take the rope off. "She wants to make this a night you won't forget. And later she will remember that you gave her the best you had to give. Freely. Relentlessly. You have something for her to cherish." Taris lifted his buttocks to get more of her teasing tongue. He breathed shallowly now. His eyes were still closed, his lips parted. His chest heaved. The muscles of his belly tensed as she caressed the soft skin around his testicles. "You're so utterly adorable, Taris." She shed her blouse and touched his belly with her breasts. He moaned loudly. Kalisha grinned with satisfaction then returned to fondling his cock and thick balls.

"My pleasure, Taris, that's all I wanted to hear." She swallowed his length. Taris cried out, lust taking over, forcing back what his mind told him and whatever memory dictated his behavior. He trembled when Kalisha adjusted her body over his and finally opened his eyes.

She kissed him. "I know, but thanks for telling me." 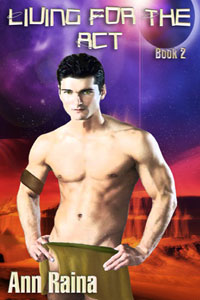