Men Can Do Romance: A Novella (MM)

Despite living in free-spirited New Orleans, Elliot finds that his career as an insurance actuary has him constantly weighing the risks of every move he makes in his life. When Troy, his teenage crush, returns home to the Big Easy after a stint with the Marines and unexpectedly announces he’s gay, Elliot must decide if he’s willing to take a chance and find out if men really can do romance.

Also by Michael Holloway Perronne: A Time Before Me Falling Into Me A Time Before Us Starstruck: A Hollywood Saga Embrace the Rain 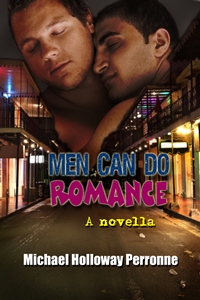 Men Can Do Romance: A Novella (MM)

“Oh, hi,” I said, thrown off when a muscular handsome god opened Louie’s door. It took a few moments before it registered who stood before me. He was as handsome as ever, but now there was an added maturity to him. “Troy?”

“Elliot! Long time, no see. Come in,” he said, opening the door wider for me to walk inside.

“I’m sorry…I…uh…wanted to bring back Louie’s camera. He’s such a night owl. I thought….Well, I hope I didn’t wake you up or anything. I didn’t know you were in town.”

I found myself feeling hot and flushed all of a sudden. I had always had a crush on Troy growing up. He had been Louie’s older, dreamy brother. Over six feet tall, coal black hair, emerald green eyes, and a wide killer smile that would leave you breathless. My first big crush. Sure, Louie and I had been close friends since elementary school, but when I hit puberty, around the time Troy must have been a senior in high school, I came up with an endless supply of excuses to visit Louie’s house in the hope of just catching a glance of his brother.

Everybody in school knew of Troy. He had been the big man on cam-pus from first grade to graduation…quarterback, dating the head cheer-leader, most likely to succeed at...well…everything. I used to practically swoon if I happened to walk by him in the halls at our tiny Catholic school, and he’d say, “Hey, Elliot. What’s up?” to me. This walking sex on a stick would actually acknowledge me…little freshman me. It made me feel special each and every time.

He’d joined the military right after high school. Louie said his brother wanted to give back to his country in this time of war and crisis which of course made him even more swoon worthy to me. When he came home he usually stayed at his and Louie’s parents in Mandeville about an hour from New Orleans, and I hadn’t seen him in years now.

“No problem. Come in,” he repeated.

I tried to pull myself back together. Damn. In a matter of seconds, he had turned me back into a shy awkward teenager.

“Thanks,” I said, finally walking inside. “Is he here? I just stopped by on the off chance to return this.”

I laid the camera on the coffee table, and then nervously stuffed my hands into my pockets.

“Nah, he went out with some friends. He hasn’t come back in yet. You want anything to drink?” he asked.

“Ah, that’s okay. I should probably be heading home myself. I bor-rowed his camera for a trip I took to Puerto Vallarta. I never get around to buying a good digital camera myself. Why should I when I can borrow Louie’s, right? I just left meeting up with a da…friend, and since he’s always up late, I thought I’d stop by to see if…”

Dear God! I’m rambling. Someone stop me please before I embarrass myself even more!

Finally. I shut myself up.

“I’ll make sure he knows you dropped it back by,” Troy said. He started to open his mouth again as if he were about to say something else. Then, he paused for a bit before saying, “So, how you been all these years? When I’ve asked about you, Louie says you’ve been working as an…uh… actuary here in town.”

He’s asked about me! Don’t. Stop. Please don’t further embarrass yourself by reading more into a casual conversation.

“Yeah, for a few years now. I’ve never made it too far away from New Orleans. Sort of stayed close to home. How are you? Louie said you were finishing up with the military. He didn’t say you’d be in town though.”

“Yeah, I sort of surprised him. I was going to travel around for a bit before you know…making my mind up about my next move. But I decided I should spend some time with my little brother.”

“That’s great. Maybe I’ll see some more of you while you’re in town. Any idea on how long you’ll be here?”

He shrugged his shoulders, and I couldn’t help but notice how his blue t-shirt pulled tightly in all the right places.

“I'm still figuring some things out. What the next move is. Stuff like that,” he replied.

“Cool,” I said, momentarily unable to think from the impact of gazing at him. “Well, I better head home and let you wind down. Thank Louie for me again.”

“Sure. I...” Troy started to say before trailing off.

I stood there waiting for him to finish. Why did Troy look so nervous? I could never recall seeing him look nervous about anything. Then again, it had been a long time, and I couldn't even imagine some of the things he must have gone through in the middle of a war zone.”

“See you around,” he finally said.

I had the nagging feeling that that had not been the phrase on the tip of his tongue.

“You, too, Troy. Take care,” I said, walking out and shutting the door behind me.

Damn. Some guys just got better looking with age. As I walked back down to the street, I wondered what he had been about to tell me...and what had stopped him.