“Do you intend to rape and kill me?” she asked softly.

It was the first time he’d heard her voice. It was as beautiful as she was. He felt it was his turn to look her over, she looked so young and innocent just like flowers blooming in the spring and she was just as beautiful as they were. He realized he’d been right about her hair color and it was even lovelier up close. But what surprised him was that she didn’t seem the least bit scared of him or his nudeness. It wasn’t the reaction that he expected at all, he thought that she would cower in a corner and demand that he put something on. He was a little confused about the question she’d asked though until he realized he hadn’t laid the knife he’d used to skin and clean the squirrels on the table with everything else.

“I don’t have anything—oh what’s the use. You probably don’t understand anything I’m saying anyway.” She said turning to look at him once more.

Drake felt furious with the fact that she thought him a savage that would rape and kill an innocent woman, otherwise he would have laughed at his stupidity for forgetting the knife in his hand. But when he stepped through the door and saw so much of her uncovered he couldn’t help but make his way to the bed to look at her. Maybe he should play along with it and give her a little scare after all she shouldn’t have been out in the mountains all alone in the first place. He could tell just by looking at her that she was pampered and proper. Yes maybe a little scare was exactly what she needed or deserved.

He looked down at the knife as he stepped closer to the bed. The young woman got out of the bed pulling the blanket around her and then began to search the cabin with her eyes. He presumed she was looking for some sort of weapon to use in her defense. She looked like a rabbit caught in a snare, not knowing which way to turn. She turned and stared at him across the bed he guessed she realized there was nothing there to use as a weapon.

“Please don’t hurt me. If this is your home, I’ll leave—just let me get dressed,” she begged.

Drake looked around the cabin wondering if he should keep up the masquerade or if he should let her know that he understood everything she was saying and had no intentions on harming one beautiful strand of hair on her head. He looked back at her when she spoke again breaking into his concentration.

“I’m sorry, but I didn’t touch anything other than the bed.”

Drake stepped around the bed and walked toward her. He was surprised once again when she didn’t try to run she only backed slowly against the wall. He reached out and grabbed her by the arm pulling her up against his wet naked flesh closing his eyes as he inhaled the scent of lilacs. It almost overwhelmed him. He brought his other hand up, the knife forgotten once again, or at least until he heard her scream.

“Please make it quick. I really hate pain,” she cried out.

Drake opened his eyes. He knew he was taking this too far when he saw the tears form in her eyes and roll down her smooth creamy cheeks and felt her trembling against him. But for some reason he couldn’t resist the urge to touch her, keeping the knife held against her he let his other hand caress up the side of her leg over her hip, up her waist stopping just below her breast.

He realized she’d been holding her breath when it came out in a rush as he stopped. He wondered if she was about to faint, but she stood there like a stone as he moved his hand up to move her hair behind her ear and then leaned in to whisper perfect English in her ear.

“Pray tell me, woman, who said I was going to do anything to harm you in the first place?” He turned her hair loose then walked to the stove and removed the kettle to pour a cup of coffee after laying the knife on the table. “Besides if I wanted to rape and kill you don’t you think I would have done it while you were asleep last night? I trust you slept well in my bed.”

“Your bed—I didn’t think anyone lived here it wasn’t kept up and there was no food here. I’m sorry if I knew someone lived here I wouldn’t have intruded. Wait a minute you understood everything I’ve said to you. You knew how frightened I was and you never said anything. Why did you do that and why did you have a knife in the first place?”

“I used it to clean the squirrels I killed earlier. I plan to feed you.” He turned to look at her once more as he motioned to the table. “Not rape and kill you, sorry to disappoint you.”

“How did you get up here? My father had the tree chopped down so I couldn’t escape that way again.”

Drake laughed. “It wasn’t easy, but I’d face any challenge to get to you.”

Satin shook her head. I should send you away. I should say that I’m sorry I ever met you but I can’t—I’m not. It feels as if I’ve waited forever for you to find me. I wasn’t even sure you wanted to find me. I hated that you sent me away, but I’m not sorry for the time I got to spend with you. I wouldn’t trade that time for anything in the world.”

“I didn’t want to send you away.” Drake couldn’t take it a moment longer he had to feel her lips on his. His mouth found hers as he kissed her hungrily wanting all of her more than he wanted to breathe. He had been too long denied her body. He pushed her away slightly from his body so that he could get undressed.

“Come here, woman. We need to get you out of those clothes.”

“You make me feel so alive when I’m near you. I feel like I did when we were at the cabin and in the camp. I’ve missed you so much. When will you take me home with you?” Satin questioned.

“Soon, Satin, very soon, I want to take you home with me now, you must know that. I can’t stand being without you. I can’t do it just yet, but I can’t wait that long to have you.” He pulled her back to him, lifting the nightdress over her head. He wanted to kiss her from her beautiful head to her dainty little toes and everywhere in between. He didn’t want to stop until he made sure Satin knew he loved her.

He sank his fingers in her hair, ravishing her mouth before kissing his way across her face down the column of her creamy throat. He lifted her into his arms, carrying her to the bed. He placed his knee on the mattress as he eased them down to it.

He moved down her kissing and caressing every inch of her. He took her nipple between his teeth teasing it to a rock-hard peak with his tongue. He loved the sounds coming from her full pink lips and the feel of her finger tangled in his hair, but he knew they needed to be as quiet as possible so as not to alert anyone in the house to his presence.

He moved further down her body unable to wait to taste her. He pulled her legs up, placing them over his shoulders as he knelt on the floor. “I need for you to try to be as quiet as possible, sweetheart, so no one will come in and catch us.”

“I’ll try.” She breathed and placed her fist to her mouth.

Drake smiled then lowered his mouth to her clit, running his tongue over it leisurely before moving down her slit to spear his tongue in and out of her tight little pussy and then around the outside. She tasted like honey on his tongue all warm and sweet. He could spend a lifetime loving her this way, but he didn’t have the luxury this night. His cock was so hard it ached to be inside Satin once more. Never in his wildest dreams did he ever imagine that he would crave the woman he was married to or in this case would be married to twice.

Drake moved up her body keeping her legs over his shoulders, unable to wait any longer to feel the tightness of her pussy enveloping him. His mouth ravished hers as he speared her pussy capturing her moans as he thrust forward sinking to the hilt. He wanted to roar out his own pleasure as she stretched and clasped around him, but held it inside. He was deeper inside her than he’d ever been before. It didn’t matter where they were or where they’d ever be Satin would always feel like home to him.

He knew he wouldn’t last long in this position, but he wanted Satin to achieve her release before he reached his. He pumped in and out slowly, enjoying the pull of her muscles with each stroke. He wanted to pound into her sweet wet honey harder and faster, but didn’t want to alert the rest of the household. He wanted to be able to spend as much time with Satin as he could as Black Thunder. Once they were married that part of him would be no more and he knew they would both him it.

Drake held his hand over her mouth muffling her cry of ecstasy as he felt her muscles clinching and milking him taking him deeper. He buried his face against her inner thigh to drown out his own orgasm. He sank deep into her, filling her with his seed. He released her legs, slid out of her and moved to her side.

“Damn woman, I don’t think I’ll ever get enough of you. I love you.” He soothed her hair out of her face as he looked down into her beautiful emerald eyes. 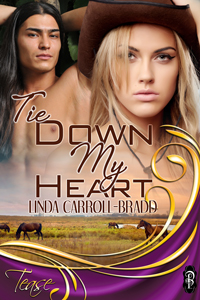 Tie Down My Heart
Linda Carroll-Bradd
In Shelf
$2.99

Belonging to Her Mountain Men (MFM)
Marla Monroe
In Shelf
$4.99
Tweets by
sirenbookstrand