In the midst of a dry spell, Jenny accepts her friend Ginger’s invitation to a mountain for a night of orgiastic festivity. Jenny gives herself over to the abandon and eroticism of the Dionysian mysteries, fueled by wild music and pure lust.

Encounters with the spirits of the mountain leave her energized and nearly sated, but she must face one final lover. The god of the ritual himself is in attendance, and he is calling Jenny to him. 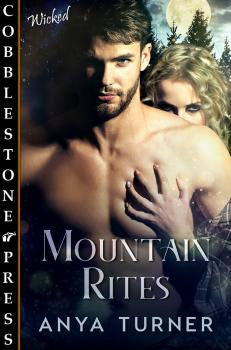 Jenny wasn’t sure she bought her friend Ginger’s idea. Sure, they had spent the last few months complaining about their dried-up sex lives, and neither of them were prudes, but this was a step beyond their usual carousing.

Ginger rolled her eyes. “The Dionysian mysteries aren’t like that. Think of it as a rite of mystery. It’s pretty high up on the mountain, and it’s not exactly easy to get into those groves if you’re not invited.” She was filing her nails to an attractive yet practical length, probably in anticipation of the revelry.

Jenny crossed her arms. “Sounds like a good way to get pregnant with some nature spirit’s baby. A fertility rite in the woods? I’ll pass.”

Jenny considered it. She and Ginger offset each other well at concerts and clubs, so why not at some mountain ritual? Jenny was short and chubby, but she thought she wore it well: her long, curly blonde hair suited her heavy breasts and hips. Her figure was reminiscent of a Romantic painting of a shepherdess or milkmaid. Her milk-and-roses complexion helped with the overall effect. Ginger was the exact opposite, being tall, thin, and dark by comparison. She wore her black hair just to her shoulder, and even in empire dresses, she had neither breast nor hip to show off. If Jenny was a pastoral ideal, Ginger was a pre-Raphaelite sorceress.

“You know we always do better when we go out together!” Ginger pressed her hands together imploringly.

Jenny allowed herself to be persuaded. The idea was intriguing and even a little exciting. They got up the next morning with enough time to dress up and drive through the mountain in Ginger’s clanking, rusting car.

In deference to their modern sensibilities, the warm weather, and the long drive ahead, both put on their most alluring bras and panties but not much makeup. Ginger settled on a body-hugging tank top and tight, dark jeans that emphasized her long legs and arms. Thinking of the cooler mountain temperatures, Jenny went with a clingy sweater that showed off her chest.

The road up the mountain was narrow and switched back and forth. Ginger drove slowly up every stretch that didn’t have a line of pine trees protecting the psyche if not the body from the sheer drops. She licked her lips and clutched the steering wheel tight.

Jenny kept one eye on the map, which was useless past a certain height where the road turned to dirt, and the other on their cell service, which had ended with the paved road. “We better not die,” she said, wondering if the ice scraper could be used as a weapon. She trusted Ginger’s judgment, but isolated up on the mountaintop, all it would take was one person with bad intentions to do them serious harm.

“Are you kidding me? We’re going to be fine! This girl from work has been attending for years, and the only thing she has ever encountered there is fantastic sex. She’s the one who got us in.” Ginger eased the car through a turn. “We’re almost to the end of the road now, and it’s a quick walk to the clearing from there. The sun’s going down in an hour, so start getting those sales-rack panties wet, Jenny.”

Jenny laughed in spite of herself and settled back in her seat, feeling slightly more at ease.

Ginger’s contact was waiting for them at the end of the road. She was a beautiful young woman with inhumanly yellow eyes and black hair. She was dressed in a white tunic that ended above her knees.

Jenny could see the woman’s nipples through the thin fabric draped around her body. Jenny bit her lip as the beginning of arousal licked through her.

“Glad you ladies could make it,” the woman said as Ginger and Jenny got out of the car.

Ginger left her keys on top of the wheel on the driver’s side and smiled. “Jenny, this is Melia. Melia, Jenny.”

Melia gave Jenny an impenetrable look with her strange eyes. Then she turned away from the road, jerking her head at them to follow.

The woods were cool. The ground wasn’t choked with underbrush but soft and yielding with moss, ferns, and old leaves.

Jenny heard a faint flute from ahead. Then a drum started up. The music was simple, almost deceptively so. As they got closer, she could hear a complicated, frantic melody playing around the main motif. It itched at her feet and hips, making her want to dance, but she resisted. She sensed that the simple rhythmic grind of a dance club wasn’t what this music wanted. It demanded something more primal.

With the sun setting behind them, they broke into a clearing. The crowd there was mostly women. Dressed in short white dresses like Melia, they held sticks and tambourines and danced wildly, kicking up grass and fallen leaves. On the far side of the clearing, half-hidden in a tree’s shadow, sat a man playing the flute.

Jenny felt the music slip under her skin. The need for her to run and scream lessened as a throb between her legs settled and heated.