Beware of the dotted line. I'd never thought of my life as being anything special or intriguing, until the night Death came to my door. Thrust into a life or 'death' battle, I had Seventy-two hours to prove my father took out a contract with Lucifer.

With Death by my side, I set out to figure out the who's and whys of my situation. However my father had other plans for me. Now, in a race against time, would I survive my Seventy-two hour reprieve, or was I destined to fulfill that contract. Somehow I knew, I’d never be the same.

Death was at the door for me. I knew it. I cowered, sliding down the door as lightning flashed and thunder clapped mere seconds afterward. My number was up. The sands of time had spent right down to the last grain. I wasn’t ready. Glancing up at the clock on the wall facing the fireplace, I noted the time. Twelve forty seven. I burned it into my memory.

Watching the second hand strike each second that passed, I shook with fear, horrified by what could possibly happen. The only chance I had was to answer the door, embrace death, and go on to the hereafter, or wherever the hell we go when we die. But I didn’t want to. I hadn’t lived yet. I-I-I hadn’t met the person I was supposed to fall in love with. I hadn’t done anything special with my life. So, why was Death standing on my stoop, rain falling around him while the raging storm grew angrier by the second? It made no sense. I panicked. I knew that instinctively, yet I couldn’t give two shits about keeping up pretenses. As it was, any moment I could be deader than a doorknob. That reality sucked.

I glanced around my sparsely decorated house and sighed. Everything I owned was second-hand. My TV had a knob on it, and rabbit ears sat on top of it. The only channel I could watch was public broadcasting. Not that I watched it. My couch was puke green, itchy and threadbare. My end tables were covered with nicks and dings, and my lamps were glass globes made popular in the sixties. In the middle of my hardwood floor sat a throw of shag carpeting. I thought it was cool back in my college days. Now it seemed useless and tacky. Funny how things run through your mind like that when you’re facing your demise. There were no images of my parents, first birthday, track meets, nothing. More than likely it was because I didn’t have those. I didn’t come from a “loving” family.

“Kimber Vargas.” I cringed hearing his deep, resonating voice bouncing around in my skull. “Open the door, boy. Your time is up.”

“Fuck you!” I screamed, covering my ears with my hands. “I’ve done nothing wrong. I’ve not even lived for Christ sakes! Come back in fifty years. Then we’ll talk.”

Another crack of thunder rippled through the night air accompanied by another flash of lightning that zipped and crackled as it struck just outside my home. Fuck, I was screwed. “I said come with me.” His deep, baritone voice vibrated through me, and my eyes flew open.

Before me he stood. My gaze traveled up his body. His feet were covered in thick-soled, heavy-duty combat boots, and his legs were encased in black leather. I groaned. I followed the line of his body. The man’s muscular thighs gave way to an impressive bulge at his crotch. My mouth watered. I could see the outline of his cock. It hardened with each second I stared at the impressive length. I craved him. Needed him with my next breath. With each tick of the second hand on the clock, I had more images of him and me tangled together in bed, his dick filling me to the point of pain. Making me scream his name until I was sure I’d implode.

I should have wanted nothing to do with this man who wanted to kill me, and yet all I wanted to do was crawl all over him like a happy kitten.

Blinking a few times and clearing my throat, I continued on to his tapered waist and washboard abs that were covered by a tight black muscle shirt. Covering his shirt-clad torso was a long black duster with the collar turned up, and a black gaucho hat sat atop his head. Even in the low light of the room, his features were hard to decipher, almost completely blocked out by the brim of his hat.

“No.” I pushed myself against the door more firmly and floundered as I stood, my gaze never leaving his. “I’m twenty-five. I work as a mailroom clerk in a Fortune 500 company and, damn it, look around you. I’m nothing. You don’t want me yet. I’m not your mark for the night o-o-r whatever.”

His hand went to the holster at his thigh. Lightning flashed again, glinting off the silver snap, and my breath hitched. Long, thick fingers curled around the butt of his 9mm, and I swallowed audibly. This was truly it. This wasn’t a dream. My shitty life was over. The crack of the snap unhitching sounded like a gunshot ringing out in a small, confined space. Rooted in my spot near the door, I shook. I couldn’t move. Fear held me in a death grip—no pun intended. In those last few moments, it was like my body wasn’t my own anymore, like I was standing on the other side of the room watching as he pulled the gun and leveled it at my chest.

I screamed no over and over again. I told myself to move, to throw something, but I did nothing. “Why, Death? Why now? I’m no one important. I’m healthy. I take care of myself. I just want to live.” I whimpered.

His head turned slightly, and lightning caught the round silver stars that wrapped around the brim of his hat in a leather band. “Your father’s contract is up. It’s time.” He walked toward me now.

He stopped again, contemplating what I’d stated. “No, this contract was specific. It’s time to go.”

Bullshit. Any contract he’d made with my father was his and his alone, not mine. There was no way I was dying for that selfish bastard. “Fuck you, Death. Go find my father and leave me the fuck alone.”

Anger boiled in my veins as I stood there. To know that my father had taken out a contract on my life was beyond appalling. The man had not only disowned me when I came out of the closet, but he also wanted me to die for him? Nope, don’t think so. He could rot in hell for all I cared. That was where he deserved to be anyway, especially after all the beatings I’d endured at his hands. Hell. He needed to be strapped to Lucifer’s table and ripped apart slowly until there was nothing left of him. Maybe then he would know a smidgen of the pain he had inflicted on my life.

“The contract is binding. Your father was required to do certain things, or he forfeited the blood of his first-born son. Requirements he failed to uphold. By not completing the tasks set before him when he signed the contract, your father gave up the life of his only begotten son. You, Kimber, are that son.”

My breath left me on whoosh. My father had done this on purpose. I was sure of it. “What if I can prove he did it so you’d take my soul? Would I get a reprieve?” I wanted to will him to say yes. I wanted the giant of a man to holster the pistol in his hand and disappear just as quickly as he’d arrived.

Slowly his hand lowered to the holster attached to his thigh, the gun slipping back into the leather casing. “You have seventy-two hours to prove your case.”

“Just like that?” I couldn’t believe what I was hearing. Death was giving me a reprieve.

“Don’t push me. I shouldn’t even be doing this. It’s my ass on the line,” he huffed, his shoulders sagging briefly.

“Thank you,” I croaked. I wanted to go to my knees and sob with relief.

“But there are conditions.” My blood went cold.

“Of course there are.” I sighed.

As the man crossed his arms over his impressive chest, his neon blue gaze locked with mine, and I sucked in a breath. The irises of his eyes seemed to flicker like a living flame then swirled into liquid mercury. They were absolutely gorgeous, and I found myself entranced by them. They dragged me into a hypnotic state where I didn’t care if he had, only moments before, tried to kill me. He took a step toward me, and my heart skipped a beat. My stomach coiled in a knot of desperation. He oozed sex appeal and danger as he ate up the space between us. My dick twitched, stiffening each second he stood there. On one hand, I should’ve tried to escape him, even if he was giving me a reprieve. On the other hand, however, I wanted to see what he would do when he finally stood directly in front of me.

Would he kiss me?

Would he snarl and tell me to stay away from him?

Sexual tension curled through the man’s body. His lips curled in a wicked grin that spelled nothing but trouble. His hands raised and pressed against the wall above my head, and his face dipped to my neck as he breathed me in. A soft, rumbled growl passed his lips. I stilled. My heart crashed against my ribs. My breath came in quick pants. Oh shit.

“I stay with you,” he said, nuzzling my neck. “You will eat, sleep, and find your evidence in my presence.” He lifted his head and licked his full, bow-shaped lips. My knees turned to water. My dick pressed against the zipper of my jeans.

Not only was his body made for sin, so was his face. No one was that good looking; it wasn’t natural. I snorted at that thought. Nothing about the situation I found myself in was natural. I was talking to fucking Death for God’s sake. “Deal.” 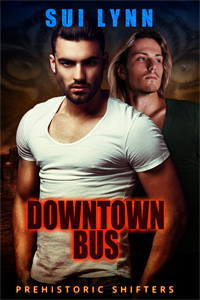